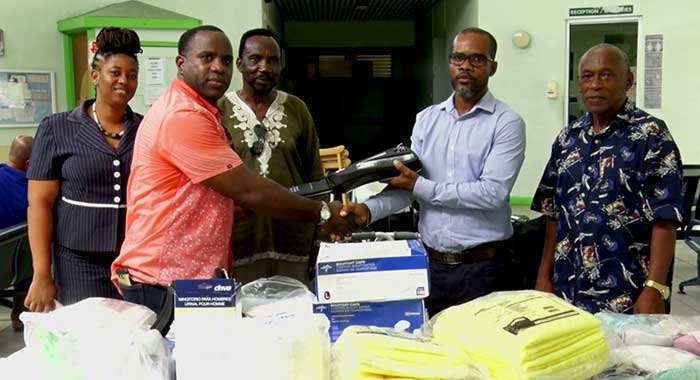 The Obstetrics and Gynaecology Department within the Milton Cato Memorial Hospital (MCMH) is in a much better position to provide care for patients with the donation of a brand new cardiotocography (CTG) foetal heartbeat monitor and several other pieces of equipment and care packages.

Head of the department, Dr. Sheridan Slater said Ron Kilius, a Canadian businessman and friend of the late surgeon and former Governor General of St. Vincent and the Grenadines Sir Frederick Ballantyne, donated the CTG in his honour.  Additionally, Agents of Change Organisation Inc., a faith-based NGO in Canada, donated several pieces of equipment and care packages.

The handover took place at Maternity Ward A, in the presence of Slater, Sir Frederick’s daughter, Lauren McIntosh, and Deputy Hospital Administrator Andrew Williams, among others.

Slater extended thanks to Kilius, whom she described as a friend of the department, for his gift to the MCMH.

She said that the previous machine is old and not functioning as well as it should. Slater also explained the function of the machine.

“It is used for the monitoring of the baby while the baby is developing within the mom.  It helps to guide the Physician as to when the baby is in stress meaning that the baby needs to come out either by Caesarean section or delivered by vaginal birth”.

McIntosh, said it is an honour that Kilius donated the CTG machine in memory of her father.

“We’re honoured, one, that he’s donating it in honour of Sir Frederick Ballantyne and, secondly, the people of St. Vincent and the Grenadines…”

McIntosh stated that the CTG will greatly benefit the department.

In accepting the CTG foetal monitor, Williams expressed thanks to Kilius for his donation.

Meanwhile, Williams was also on hand at the hospital’s Atrium to accept another donation this time from Agents of Change Organization Inc.

Speaking at the handover, Nathaniel Sandy, an affiliate of the organisation, commended all the persons who were integral in sourcing the items.

In accepting the donation, the deputy hospital administrator commented on the fact that the hospital is still receiving gifts even in the pandemic season.

He thanked the organisation for the thoughtful donation to the MCMH, adding that the items will go a long way to provide care for their patients.

He added that Bibles and books will also be donated to both prisons.

The next step, according to Abraham, is to dialogue with the Ministry of Education and principals to start the distribution of items to schools.

Both donations to the MCMH were handed over last Wednesday.