Filming, feting in cemetery are the same — Luta 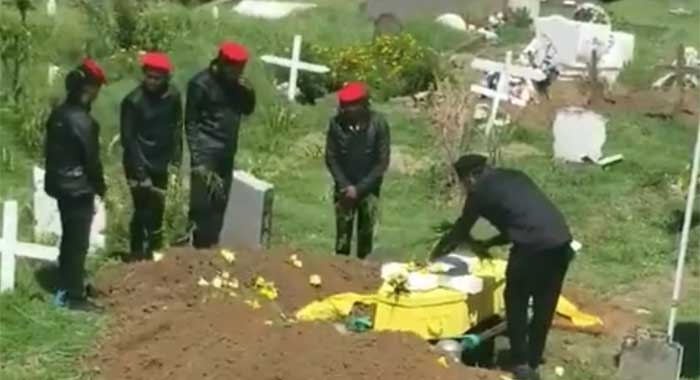 A scene from the filming at the Kingstown Cemetery on Saturday.

Cultural ambassador Rondy “Luta” McIntosh has defended his action to use an actual prepared grave at the Kingstown Cemetery to film a video for a political song.

And while he denied that the postponement of the burial at the cemetery on Saturday was as a result of his activities there, he said that filming in cemeteries is something that artistes do.

He further asked if his actions were worse than fetes in cemetery as part of All Saint’s and All Soul’s observations – referred to locally, in some circles, as “Jumbie Leggo”.

McIntosh also rejected the allegation that he had desecrated the burial site, and, therefore, had broken the law.

He said that before using these terms, people should search the internet for their meanings.

“To desecrate something means to treat a sacred place or thing with violence, disrespect; violent disrespect.’ Where in a video shoot there is violent disrespect and how it is sacrilegious and all these words they’re throwing around,” McIntosh said in a call to Hot 97 on Monday.

“Sacrilegious is an act of destroying, to hurt or ruin something sacred — like if you burn a cross, that is sacrilegious. So people just throwing a whole heap a terms and words around and trying and sound intelligent. Come on man,” McIntosh said.

He said there are people, not including what he called “the internet crazies” — who he said he is not bothered by — who are offended by his actions.

“But we live in a Christian society … they do not like the whole graveyard stuff and I understand that. And I am publicly issuing an apology to anyone who is offended that a shoot took place in a burial ground.”

Asked if, in light of his apology, he was still going to use the footage from the cemetery, McIntosh said that the filming for his project was done at various locations and he could not say which ones would be included in the final project.

He said there are people who did not like him singing soca and asked whether he should stop singing because this offends some people.

Asked why apologise then, he said because he knew that “people are sensitive to those things. So just to say, just to those people.”

McIntosh said he works well with his team and they would make, together, a decision on whether to use the footage.

The artiste said that whatever the decision of the group, he would act as if it is his and he supports it.

4 replies on “Filming, feting in cemetery are the same — Luta”