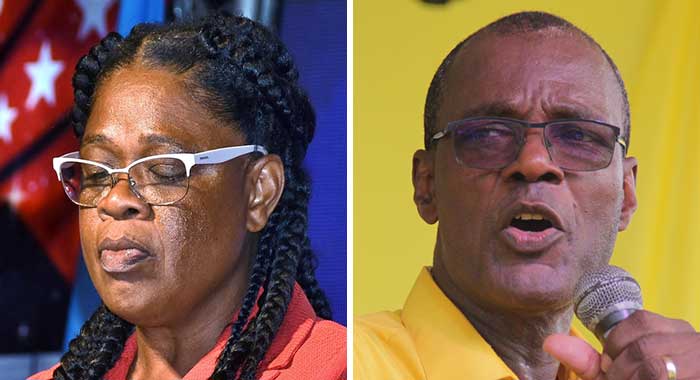 Member of Parliament for West Kingstown, Daniel Cummings has criticised Unity Labour Party candidate for the area, Debbie Charles for proposing to build a sewage treatment plant in the community.

“She looks at the people of Rose Place as being filth,” Cummings told the New Democratic Party’s campaign rally, one night after Charles announced the proposal.

Charles will make her second attempt to unseat Cummings, who is seeking his third five-year term as MP for West Kingstown.

Speaking at the ULP’s campaign rally on Wednesday, Charles, a senator and parliamentary secretary in the Ministry of Education, proposed to “develop a modern sewage treatment plant in Rose Place”.

She did not elaborate on the idea.

But Cummings took her to task over the suggestion, saying:

“Imagine that. In the heart of Kingstown she wants to put a sewage plant.

“First of all, if the poor lady had asked me, I could tell her we don’t need a sewage plant in Kingstown.  We have a very effective system that takes the thing out to sea. CWSA actually just repaired the line,” said Cummings a former general manager of the Central Water and Sewerage Authority.

He said that an NDP government “will lift Rose Place to the highest possible standards.

“That is what we are doing to do. Not denigrate you. Where in Rose Place can you put a sewage plant? You don’t see what that woman intends to do? She doesn’t care about the people. Could you image that? A sewage plant.”

The opposition MP said that the NDP has a proposal, following many meetings and discussions with residents, “about lifting Rose Place not just as a model for St. Vincent but for the Caribbean.

“We talk about cleaning up that place, acquiring the lands from Magikleen back to the hospital and back to Edinboro by the Nine Steps. And in that zone, we’re creating a magnificent courtyard where people can have restaurants, where they can do arts and craft, where they can have cultural shows, where the children can have a place to play.

“Where the sporting facility is on the beach now will be incorporated into it. But, on the first floor and higher, we will create a magnificent housing facility because the people of Rose Place say their livelihood is there and they don’t want to move. We will make it possible for them to live there in quality facilities,” Cummings said.
He said that persons who are being moved from the beachfront would be given houses “of a particular quality: while those who are landowners in the area, “who want to keep that heritage, they either be paid for the land and the property or they can have a quality apartment in that building.

“World-class apartments in that building. But, lo and behold, I heard this woman — I read what this woman wants to do in Rose Place? She wants to build a sewage plant in Rose Place,” Cummings said.