NDP offering electorate ‘a pig in a bag’ — Jimmy 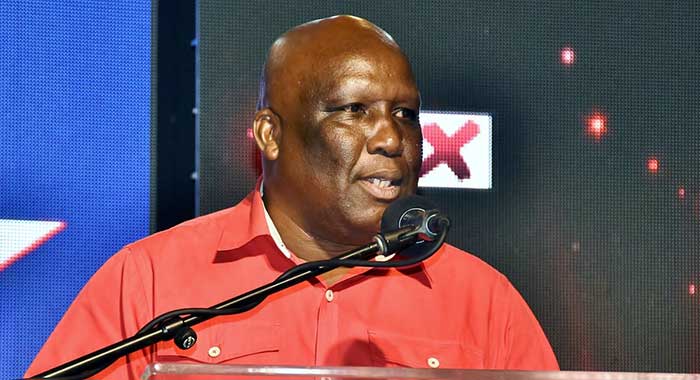 Member of Parliament for Marriaqua, St. Clair Jimmy Prince says Vincentians today are “strong, proud, and confident people due mainly to the change in their circumstances” brought on by the Unity Labour Party (ULP) administration.

He told the party’s virtual meeting on Wednesday that, on the contrary, the main opposition New Democratic Party (NDP) is offering “a pig in a bag”, a colloquial expression referring to the only knowing the quality of a prized item after acquiring it.

“I am proud to be a member of this labour family at such a critical time in our history,” said Prince, who is seeking a second five-year term as parliamentary representative of the district.

“We didn’t have curfew, or state of emergency. And we have school. This is the political party I’m talking about.”

He said that in its recent history, St. Vincent and the Grenadines has achieved many milestones and weathered many storms.

“I’m equally proud to say that the leadership of this party and government has helped us to navigate this new world order so well, that we have moved from a sleepy backwater, in 2001, to a country worthy of the attention of the entire world.

“And I’m speaking specifically about leadership of [Prime Minister] Dr. Ralph Gonsalves, and also about the fact that he was able to convince 185 countries to vote for us, in a non-permanent seat at the United Nations Security Council. So when I talk about a political party, being the greatest organisation in this country, I have justification.”

He said that at home, Vincentians enjoyed a quality of life “that surpasses any period in our history since conquest and settlement.

Prince, who is also education minister, cited the speech at the rally by Minister of National Mobilisation, Frederick Stephenson, who said the poverty headcount index was 37.5% in 1995 and 1996 while indigence was 25.7%.

The government is yet to release the latest poverty figure, with opposition lawmaker Daniel Cummings, MP for West Kingstown, suggesting that the new figures are an embarrassment.

Prince, however, said that the ULP administration reduced poverty to the extent that it was able to secure debt relief as a result of its effort.

“So let me once again salute this government, this party, and the people of St. Vincent and the Grenadines, for taking on the challenges of development so well, over the last two decades, in the interest of all of our people.”

The ULP is seeking an unprecedented fifth consecutive five-year term in office.

“These days, there has been a lame and weak call for change by some people with very few ideas, they are otherwise known as opposition. Change to them, they say, and you will see, they can’t tell you what they will see or what you will see, because they themselves don’t know. They don’t have a clue as to what is happening. They get up and they talk, they open their mouths whatever comes out. They go with it.

“Vincentians today are strong, proud, and confident people due mainly to change their circumstances because of the policies of this administration.”

He said that the ULP is the “the architects of change, the engineers of transformation”.

“In short, we are the true revolutionaries in this Vincentian reality; we are the change makers; we are the change. So when they talk about change, they’re gonna talk about this. That’s what they’re talking about. We’re talking about that kind of change; we embarked on this revolution in 2001. And we have maintained it by being prescriptive, keeping people at the centre of everything that we do. That’s the difference between us.

He said the ULP “inherited in 2001, a situation where mono crop culture was in tatters.

“We had to do something. And the leadership of this party decided, one of the things that we’re going to do was to change the structure of the education system in this country. So we dubbed it the education revolution and in every sector, we made changes: early childhood, primary, secondary education, post-secondary education, tertiary education, in areas of nursing, teaching, adult and continuing education, technical vocational training, a veritable transformation that has been the wind beneath the wings of the aspiration of the majority of Vincentians, both young and not so young.”

Prince will face off with former Marriaqua representative Bernard Wyllie who has returned to politics 22 years after being voted out of office in 1998.

Gonsalves has said that elections will be held by year-end, ahead of the March 2021 constitutional deadline.