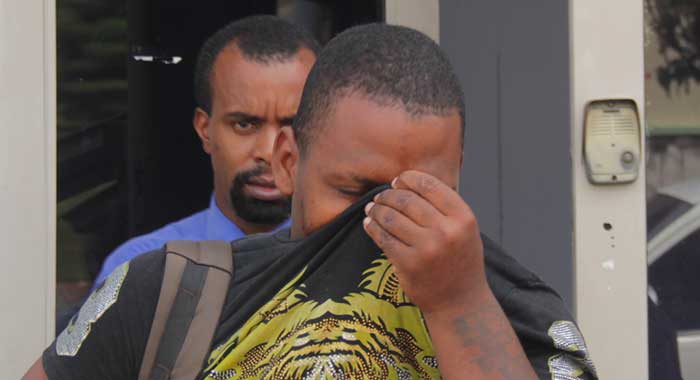 The accused, Jason Delplesche hides his face as he leaves the Kingstown Magistrate’s Court on Monday. (iWN photo)

Police have arrested and charged a man who is alleged to have stolen monies from persons’ bags at public schools, a hospital and a retirement home while pretending to be a state-employed maintenance worker.

Jason Delplesche, of Edinboro, was brought before the Kingstown Magistrate’s Court on Monday, where he pleaded not guilty to four charges and was granted bail.

However, before Delplesche’s bail could be processed, he was whisked away by detectives attached to the Criminal Investigation Department, in Kingstown, who are said to be investigating other matters in which he is a person of interest.

The thief/thieves are said to have worn facemasks, as per the COVID-19 protocol and claimed to have been dispatched by a state agency to install fans, or inspect and repair electrical installations.

Delplesche was charged that on Sept. 18, at Union Island, when lawfully required to give his name and address to a police officer, he gave a false name, to wit “Kevin Williams, of Edinboro”, instead of “Jason Delplesche, of Edinboro”.

He was further charged that on Sept. 14, at Sion Hill, he stole EC$500 in cash, the property of Carol Douglas of Queen’s Drive.

Another charge is that on Sept. 14, at Sion Hill, he stole EC$200 in cash, the property of Kendra King, of Sion Hill.

He is also alleged to have stolen EC$60 from Nadia Wilson, of Fountain, also at Sion Hill on Sept. 14.

Prosecutor Police Constable Corlene Samuel said that the Crown had no objection to Delplesche’s bail, but asked for sufficient surety, a reporting condition and no contact with the virtual complainants.

She further asked that all the matters, including the one that allegedly occurred at Union Island, be tried at the Kingstown Magistrate’s Court.

Senior Rickie Burnett set Delplesche’s bail at EC$1,500 with one surety, and ordered him to have no contact with the virtual complainant and report to the Central Police Station on Mondays between 8 a.m. and 8 p.m.

Delplesche, who was carrying a backpack over his back and a pair of shoes in one hand, used his t-shirt to hide his face as he was escorted from the courtroom to the police vehicle.

One woman outside the court, on later realising the identity of the accused man said that she would have thumped him.

She said she would have acted that way in retaliation for the humiliation she said her children had suffered when they were reportedly asked to remove their socks and shoes when school authorities tried to recover the missing money that Delplesche is alleged to have stolen.

Last week, reports began to emerge that a man, or men had turned up at a number of schools across the country, saying they had been dispatched by the Roads, Building and General Service Authority (BRAGSA), a state-owned agency responsible for the maintenance of public infrastructure.

The man/men are said to have arrived at the school after they had received a call from someone purporting to be a supervisor at BRAGSA, saying that personnel would be dispatched to the schools