West K’town ‘laboured under the burden’ of poor representation — Debbie 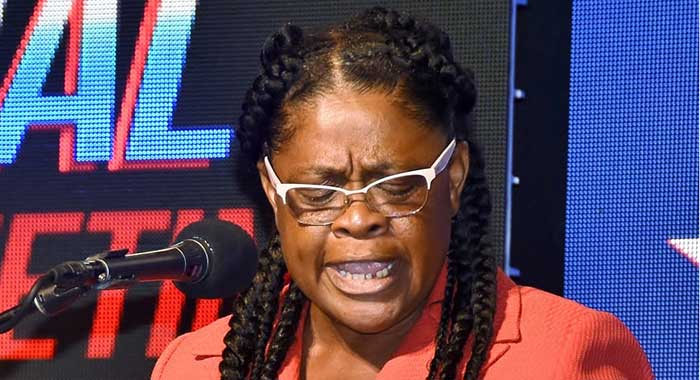 The ruling Unity Labour Party’s (ULP) candidate for West Kingstown, Deborah “Debbie” Charles has asked constituents to ditch current MP, Daniel Cummings of the main opposition New Democratic Party (NDP) and vote for her at the next poll.

“We have laboured under the burden of a representative who doesn’t know how to represent,” said Charles, whose ULP has been in office since 2001.

“Comrades and friends of West Kingstown, for too long, you have been saddled with a man with no plan,” she told the ULP virtual public meeting on Wednesday.

“And it’s evident, comrades, he walks about like a crazy man,” she said of Cummings who defeated her in 2015, when as a newcomer to politics she failed in her bid to prevent his re-election to a second five-year term in office.

“I’m not sure what he’s about because he has no plan for the people of Western Kingstown,” said Charles, a former teacher, who is a parliamentary secretary in the Ministry of Education.

The ULP is seeking a historic fifth consecutive term in office, and Charles said, “Comrades, I believe that there are now things we can do in the next term. And there will be a next time of ULP government.”

She said that even with the work that is going on in the constituency now, she has a few plans to lay before voters for the next five years.

She spoke of a road that connects Great House to Lowmans Bay; a link between Spring and the Bonadie’s property where she said a hard court would be placed soon.

Charles said that under her representation, the government would create a footpath, to connect Great House to Buddy Gutter and develop the footpath to allow passage for Mahaut (Mahoe) to Burging and

construct a road between Gun Hill and Ottley Hall.

The ULP will complete the construction of the Buddy Gutter road, define the Buddy Gutter stream, widen the road to Lowmans Bay, develop a road that links Gibson Corner to Dauphnie, through Fenton, and create an alternative gateway into Kingstown.

“Develop a modern sewage treatment plant in Rose place, develop a plan to connect the communities of Edinboro and Montrose to the existing sewer network, coordinate with central government to relocate the fisher folk from Rose place to Edinboro and Lowmans Bay, make the footpath linking Grand Gate to Walker Piece more accessible,” Charles said.

Her plans include upgrading the New Montrose tennis court, upgrading the playing fields in Ottley Hall and Largo Heights to include bathrooms and a pavilion.

Charles said she would create a national park with beachside facilities at Lowman beach and more green space for recreational facilities across the constituency.

The plans include constructing a public library and a resource centre for constituency use, crafting tailored programmes that educate willing constituents to entrepreneurial best practices, encouraging backyard gardening throughout the constituency and giving prizes to the best gardens in West Kingstown.

Charles says she wants to open business opportunities by utilising available factory space at the industrial estate in Campden Park and make land along Lowmans Bay available to the residents of West Kingstown for business and home ownership.

“Comrades, I only have this much time with you tonight. But most of you know that I haven’t spent the last five years hiding in a cave or sulking,” she said.

“I’ve been working on your behalf every day and sharing my plans and vision with you. I’ve been on your doorsteps. I’ve been in your living rooms and I’ve sat on your porches,” she said and encouraged party supporters to ensure that they and their neighbours are registered to vote in the upcoming election.

“I stand before you, a woman offering myself once again to you in service as the next representative in Parliament. I ask you to accept this offer and vote for Teacher Debbie on election day,” Charles said.