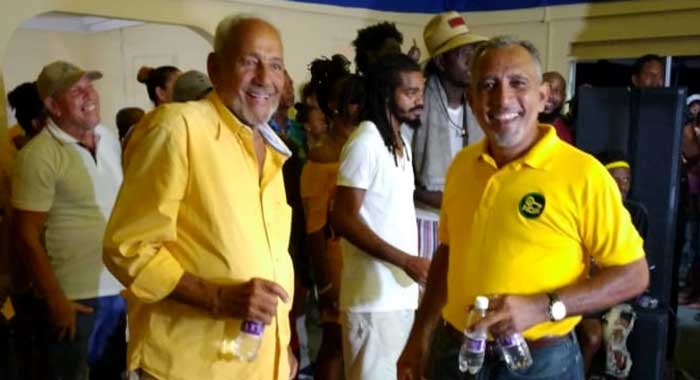 Founder of the main opposition New Democratic Party (NDP) former Prime Minister Sir James Mitchell has “warned” party supporters of a change in the colour that the party will use for the election campaign.

The NDP, over the last two decades, had settled on yellow as its colour, and that had seemed to be the case for this election until Saturday’s announcement in Bequia, where the former prime minister was also wearing yellow.

“Now, since I made that little statement, ‘Ah fed up ah Ralph, they gone crazy.  They want to know how is it I can come up with such a short sentence. I think about these things a lot and I chat with people and I get the feeling on the ground and it is  important to give that message out,” he told the opening of the campaign headquarters of NDP President and Leader of the Opposition Godwin Friday.

“I want to warn you of a big change in this campaign — a campaign aimed as your PRO said, the anthem of the New Democratic Party, one people, one Vincy, one country,” he said, misquoting the slogan, “One Nation! One People! One Vincy!”

Sir James said that “to target the swing voters, we have to break up this tribalism in St. Vincent between red and yellow and our t-shirts, this time, will be white,” he said, adding that they will include the party’s logos.

The 89-year-old leader expressed confidence that the NDP will win the next general election, which Prime Minister Ralph Gonsalves said, on Sunday, will be held before the beginning of Nine Mornings, on Dec. 16 — ahead of the March 2021 constitutional deadline.

“But, I will assure you that my concern after winning the election is making sure we win again. And I will do all that I can to help with the government and strategy to make sure that we win and win again.

He said he lost EC$540,000 clearing his name in the inquiry into the Ottley Hall Marina project, which was conducted under his government.

“… but I am only speaking to you and I know all of you, not only here but in St. Vincent and the Grenadines, would never have listened to me if they had thrown me in  jail but I have proven that we did no corruption and we had a good government…”

Sir James expressed confidence in the NDP’s slate of candidates to contest the upcoming general election.

He said that the last time he was seriously involved in an NDP campaign was in the constitution referendum, when the NDP convinced the electorate to reject proposed changes to the Constitution the nation inherited from Britain at independence in 1979.

However, in the December 2010 general elections, the ULP was returned to power by a one-seat majority, having lost four of the seats it held in the previous poll — a result that was repeated in 2015.

“Now that they know I am here, you are going to hear everybody attacking Son Mitchell again. But, don’t worry; nobody throws a stone at a dead dog. Don’t be worried and I know one secret in politics, which I will share with the party always. It’s the secret of timing. I have some shots in reserve for ULP that I will not release until the parliament is dissolved.”

Sir James retired from competitive politics in October 2000 — after 16 years as prime minister.

He demitted office at a time when the NDP was at its most unpopular. The party went on to lose the March 2001 elections, retaining just three of the 12 seats it held in parliament as the ULP won the vote 12 seats to three.