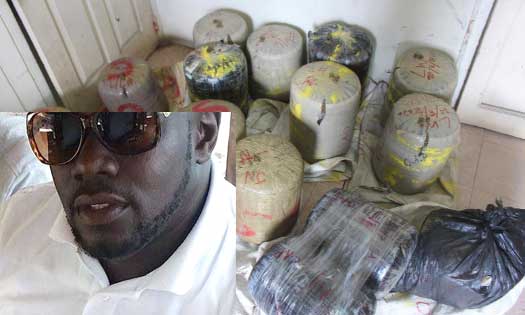 A 36-year-old van driver who was hoping to make EC$500 to transport 270lbs of marijuana from Chateaubelair has earned himself a 23-month jail term instead.

Chief Magistrate Rechanne Browne handed down the sentence on Alvan Lovelace, of Questelles, on Tuesday at the Serious Offences Court.

The sentencing took place more than a month after Lovelace pleaded guilty to charges of possession and trafficking of the drug.

The facts, as presented by Senior Prosecutor Adolphus Delplesche, are that on Aug. 20, about 12:10 a.m., Corporal 615 Williams, acting on information, headed a party of Rapid Response Unit personnel on duty about the south-western police district in search of motor vehicle HA873, a minivan.

In addition to Lovelace, there were two passengers in the omnibus.

When the police questioned him about whether he had anything illegal in the vehicle, Lovelace said, “Officer, me ha’ some sacks ah weed in the van.”

The police arrested the three occupants and took them to the Central Police Station where Lovelace told the officers he was the only one responsible for the drugs.

He said that someone had called him and he went to Chateaubelair to make the pickup, and would have gotten EC$500 for transportation of the drugs.

Delplesche commended the police officer for this and told the court it is not often these days that one hears of police officers using their official notebooks.

The trio were transported from police headquarters to the Narcotics Base at Arnos Vale, where Lovelace again accepted responsibility for the drugs and the other occupants denied involvement.

In mitigation, defence counsel Grant Connell noted Lovelace’s age and the fact that he had pleaded guilty at the first opportunity.

He said that Lovelace is a father of eight and expressed great remorse for his action.

The lawyers said that his client accepted responsibility for the drug and told the police exactly what he was doing.

The lawyer said that the EC$500 might appear to be a measly sum but added that it was at the time of the coronavirus pandemic and Lovelace is a van driver with eight children to maintain.

Connell said that the mitigating factors all seem to be in Lovelace’s favour.

“He is of good character, he shows genuine remorse, relatively young, and motivated by genuinely desperate circumstances. Eight children, COVID times, operating a van that needs parts all the time, supported his uncle [who was ill and has since died], a van driver that anybody can say picks up the elderly, helps them personally. I have seen it myself. Alvan Lovelace is a good man and is not a hardened criminal,” Connell told the court.

Regarding the value of the drug, Connell presented to the court an affidavit of

Patrick Junior “Spirit” Cottle, who he said is a cannabis consultant and activist who has 50 years of experience in the marijuana industry.

The lawyer said that Cottle has suffered at the hands of the police but has risen to sit on committees of the new marijuana movement — select committees of Parliament.

In the affidavit, Cottle says that in recent years the price of locally grown cannabis in SVG has been sold at between EC$200 and EC$250 per pound.

Connell, however, noted that Assistant Superintendent of Police Foster Scott has put the price at EC$900.

He said that Lovelace had withdrawn his shares at a local credit union and was able to come up with EC$4,000 to bring to the court.

The lawyer asked that the court accept that payment as part of a fine and give his client up to one year to pay the remainder.

“But the law is the law and he gave an historic outline of the law,” he said, referring to comments Connell had made about how penalties for marijuana-related offences had gotten harsher after amendments to the law in 2008.

He said that under the Dangerous Drug Act (1937), the nation’s first marijuana law, the minimum fine for even a marijuana seed was EC$1,000.

Delplesche said that was the case when he joined the police force, adding that the law has evolved, with a revision in the 1980s reducing the penalties, allowing for even a reprimand for the possession of a marijuana seed.

The senior prosecutor said his understanding is that the law evolves in a way to reflect the sociological and economic conditions of the society.

“What do we do in these circumstances?” Delplesche said, noting that the defendant pleaded guilty at the first opportunity and explained that he got a job to transport the drugs.

“Would we say his role is way down at the bottom of the pole or do we say, ‘Well, as an adult, you ought to know better”?”

He said another question was whether such an amount would attract a fine or a custodial sentence, and noted the legal principle that like cases should be treated alike.

In her sentencing remarks the chief magistrate said that Lovelace’s role was significant and the court began with a starting point of 32 months in prison.

Browne said that the aggravating features were that Lovelace had tried to avoid detection, as evidenced by the hour that he was making the transportation.

Mitigating features were that there was no significant concealment of the drugs, and Lovelace’s dependent children.

Lovelace was granted a one-third discount for his early guilty plea.

The court arrived at a sentence of 21 months in prison for possession of the drugs, and 23 months for trafficking in it. The sentences will run concurrently.