Health Minister should resign or be fired over dengue outbreak — Friday 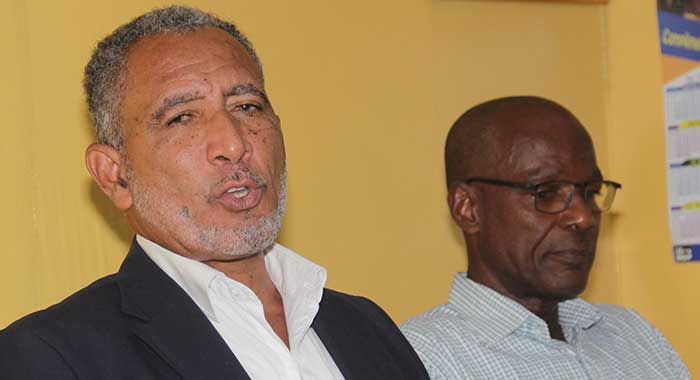 Leader of the Opposition Godwin Friday says that not only did the Ministry of Health drop the ball on the dengue fever outbreak; they dropped it on the feet of the people.

Friday told a press conference of his New Democratic Party (NDP) in Kingstown, on Wednesday, that the Health Minister, Senator Luke Browne, should therefore, resign or be fired.

“… you asked Daniel if the ministry dropped the ball. He answered it very thorough. But I would go straight to the point: They dropped the ball but they dropped it on people’s foot because people are hurting, they are suffering,” Friday told the press conference which he and NDP spokesperson on health, Daniel Cummings hosted.

“Schools are disrupted now; people have died. The Minister of Health dropped the ball. The Minister of Health, if he has any decency, should resign. If he doesn’t resign, then he should be fired because this is something that we should not be dealing with at this time in this matter,” the opposition leader said.

At the press conference, Cummings laid out what he said was the case against the health minister regarding the outbreak of dengue which has claimed four lives, and infected at least 374 persons, according to government statistics.

Friday noted that Cummings had said that the first case of dengue was confirmed in June—18 months after the Caribbean Public Health Agency (CARPHA) had predicted an outbreak of the mosquito-borne viral illness across the region.

“At that time (June) they were planning to reopen schools. Nobody heard anything about precautions about dengue,” Friday said.

“We are here in a heightened sense of awareness about disease spread and contagion because of COVID-19. Our response, if anything, should be over the top, preventative, not reacting to a crisis,” he said.

The opposition leader said that last week students were allowed to wear long clothes to school “because, suddenly, there is an alarming outbreak, 300 and something cases confirmed by laboratory tests”.

He noted, as Cummings said, that the indicator suggests that that the number of actual cases in the country is three times as many as the number of laboratory-confirmed cases.

“And there was no real concern or effort to have public awareness to talk about this to parents and so forth until we have two young people, two children, die.

“That is what we mean when we say you don’t basically respond when the fire has taken over the building, when you know that this is a preventable disease.

“You have warnings from CARPHA going back to 2019, last year. It is something we have had in the past but we have not had this cluster we have now.”

Friday said that in his own community in Bequia, people were conflating COVID-19 and dengue.

Health officials have said that in the early stages, dengue and COVID-19 have the same symptoms.

“There was no real attempt to sort of separate the two and say this is what you can do to protect yourself, protect your children because it is dangerous,” the opposition leader said.

He said that when treated in a timely manner, dengue mortality is reduced from 20% to 1%.

“Which means there are things we can do to protect people from dying,” Friday said.