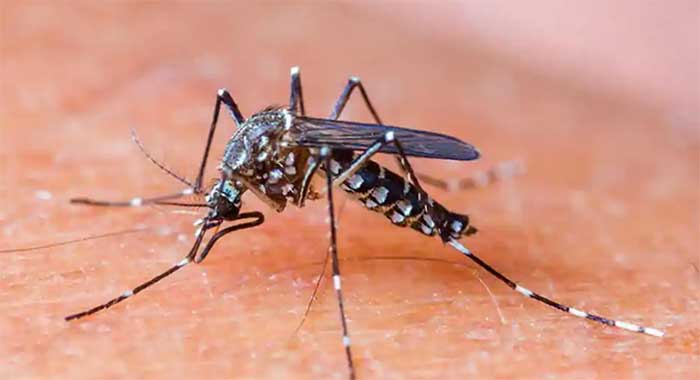 The government of St. Vincent and the Grenadines reduced the budget for the control of vectors, such as mosquitoes, even as a regional body warned about a likely outbreak of dengue fever, a mosquito-borne disease.

Now, the government says it will buy 30 more fogging machines, as the four that it has is no longer adequate for mosquito control.

Dengue fever is spread by the aedes aegypti mosquito, the same vector that spreads, chikungunya and zika.

And, the Caribbean Public Health Agency (CARPHA) had warned since January 2019 that another outbreak of dengue was likely to occur soon.

SVG is now experiencing a full-blown outbreak of the disease, with four persons having died and 374 laboratory confirmed cases having been recorded.

But, at a New Democratic Party press conference in Kingstown, on Monday, Daniel Cummings, the opposition’s spokesperson on health matters, suggested that this did not have to be the case.

Cummings said that the index used by the state shows that the government should be concerned when more than 5% of households are breeding mosquitoes.

“That is to say [that in 2016], we were five times-plus over the allowable limit of 5%. Five times!” Cummings told the press conference.

“You have that information. What did the government do from 2016 onwards?”

He said that the budget shows that on at least two occasions, the government reduced the allocation for the Vector Control Unit.

“At a time when the mosquito index was out of control, that was the response of this government– reduce the allocation to the environmental health department.”

Cummings said that another indicator is a Breteau index, which, he said, was “even more frightening” as it tells the number of containers in a household that could breed mosquitoes.

“In other words, nearly one in every two houses in … had containers that could breed the Aedes aegypti mosquito in St. Vincent and the Grenadines.

Cummings said that the scientists in the ministry of health did not have to wait for CARPHA to know that “we were up for an attack of dengue.

“Our last attack was in 2012. These things happen, generally, in cycles. So what CARPHA told them in 2019 is something that the ministry should have known already.

“What is their response? Reduce the allocation for the department that deals with the vector borne disease.”

Cummings said that vector control officers have horror stories about wanting to go out to do monitoring and their vehicle being “commandeered to do other things, for private purpose for people high up in the ministry…”

Regarding the announcement that the government would buy more fogging machines, Cummings said this is indicative of the government’s lack of forward planning, including on economic matters.

He noted that dengue is spread by the same mosquito that spreads chikungunya and zika, with which the nation has had recent experiences.

“So it’s not that we are unaware or that we should be caught so unprepared as perhaps you could make a case for COVID-19 that was new,” Cummings said.

He reiterated that dengue fever is preventable and people do not have to die from it.

“And that is where the ministry dropped the ball.”

Cummings said that talking about more fogging machines speaks to a total lack of understanding of how to deal with the mosquito problem at source.

“Fogging is a not a panacea. It is a last case resort. We should not ever reach to the stage where we have to do that level of fogging.

“What we need to do is systematically clean the country up, starting with the householders and starting with the stagnant pools. If you remove the mosquito at source, fogging then becomes limited in little pockets that you work on.”

He said that the country would not need additional fogging machines if the situation were managed properly.

“Any sensible country manages a problem in a logical framework. It is cheaper, far more effective, far more healthy. Malathion is not something to be messed with. It kills the mosquito but it does a lot of other damage. It affects your agriculture, it affects wildlife; it affects a lot of things. “You do it when you have a crisis. We should not have a crisis. We should have dealt with the source of the mosquito a long time ago and that’s how a sensible country operates. So telling me now you are bringing in more fogging machines tells me you really don’t understand what you are doing.”