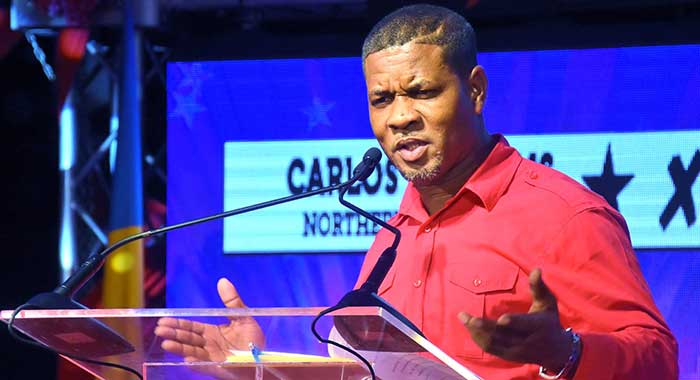 Another Unity Labour Party candidate is saying that in entering politics, he is fulfilling God’s plan for his life.

“Today I step fully into God’s plan; into the plan He, the Lord, has for me and I step confidently onto the path that God has laid, stone by stone and brick by brick for me,” political newcomer Carlos Williams says.

Williams will represent the ULP in the Northern Grenadines, where he is hoping to defeat Leader of the Opposition Godwin Friday, a four-term MP who is making his first bid to be prime minister.

“I am here; I am running as the candidate to be next area representative because the intention is to take a fresh and clear-eyed look at our own governance. We’re gonna change it, to charter a visionary course over the next five years to define the actions for which we can and must be held accountable,” Williams told the ULP’s virtual public meeting last Wednesday.

Williams, who is originally from Barrouallie but has been living in Bequia for the last 20 years, presented himself as no newcomer to politics.

He said he grew up, politically, under the mentorship of deputy leader of the ULP, Central Leeward representative, Sir Louis Straker, who wanted him to be his successor in that district.

Orando Brewster, who had said that God lead him to study medicine and now to politics before completing his medical internship, will succeed Sir Louis as the ULP’s candidate in Central Leeward.

Williams says he has a “very humble background”, coming from a poor family in Barrouallie, where he attended school.

I am a product of that community; a very proud product of Barrouallie,” he said adding that early in life, Sir Louis “sort of singled me out and called me out and said, ‘Yes, you young man. I want you to be part of what I’m doing; part of Labour.

“Maybe it was naiveness (sic) I don’t know; perhaps. I listened to him and I teamed with him from 1994 until now,” Williams said, adding that he entered politics with Sir Louis in  “in a more personal way in 1998” when he mounted the platform in support of him and again in 2001.

“I worked with Sir Louis, close to him as his liaison committee person in Barrouallie. So, I would have had the opportunity to leave a mark and legacy … relative to the Blackfish project, which was spearheaded and was pushed by me, the communal facility in Bottle and Glass, a number of footpaths and a number of other things I would have done through my relationship with Sir Louis,” Williams said.

He said that when Sir Louis returned to politics in 2015 after a five-year break,

“ I said perhaps his intention then was to get me to be the person to succeed him, but I think … I had a sort of had a jump on him, … so, whatever perhaps … he may have planned for did not happen … because I beat him at that game.

“But he saw something and he said to me, … ‘Listen, I came back for a few things. I must finish the blackfish project; I must give the people the Consumer Bill. And the third thing I must give them [is] you.’

“So I laughed. But today he is smiling, he’s happy, because I guess he would have accomplished three unfinished tasks,” Williams said.

He said that having moved to Bequia, the people of the Northern Grenadines “have embraced me as I have embraced them.

“They have shown me the kind of love that I wonder … whether or not if I stayed in Barrouallie, I would have seen that kind of love.

Williams said he has a vision for the Northern Grenadines.

The Grenadines has only voted Labour in 1966 and 1977, when Sir James Mitchell ran on a labour ticket.

Since then, it was represented by Sir James until 1984, when it was split to create Northern and Southern Grenadines, with both constituencies remaining in the NDP column since then.

Williams said that the ULP will win this time around.

It is a common thing for persons, including students and workers, to make the nine-mile, one hour, trip daily between Bequia, where they live, and Kingstown, where they work.

“Now he is, I’m hearing, and this may surprise you, The Rock of Gibraltar that they say is theirs, I am hearing and you too are hearing that Friday is conducting house to house [campaign] in Bequia…

Williams said that the Northern Grenadines this time around “must take its rightful seat and I’m going to see to that, that rightful seat at the national governance guided by this unity Labour Party.”

He said that the ULP has instituted a strategic and ongoing national plan.

“And day by day, month by month, year by year, this government works for the benefit of the people of St Vincent and the Grenadines. Northern Grenadines now stands at the deciding moment within the history of the constituency. No longer can we afford to let our future simply unfold. We must prepare, plan and execute. That’s what I’m going to do,” Williams said.

“No longer can we afford to let petty partisan division get in the way of lifting up every human being. We must build bridges to each other no longer will we, indeed the Northern Grenadines, be at the tail end of foreign wealth and investment we must believe in ourselves, in our dignity and in our people,” he said.