Beyond diplomacy — SVG and Taiwan are friends 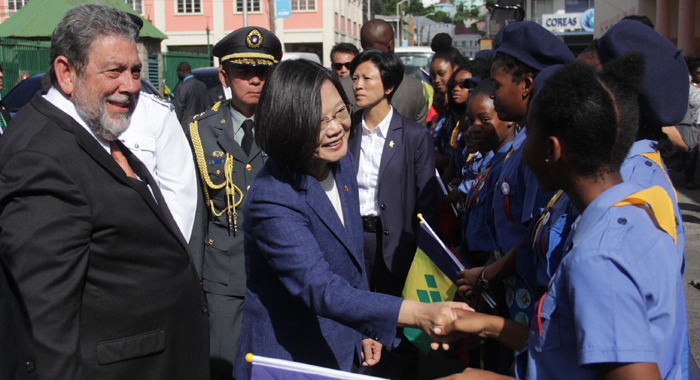 As we continue in our forward thrust in nation building, rejuvenating, and reinvigorating ourselves, truly capturing the sentiments of the 2019 independence theme “A Renewal At 40”, let us do so with a deep reflection from whence we came.

One area for reflection would be some of the key partnerships and relationships that have helped us develop over these four decades of nationhood. One key strategic partnership and relationship, dare I even say, “friendship”, that I would like us to focus on is with our dear friend, the Republic of China (Taiwan).

Taiwan and St. Vincent and the Grenadines (SVG) established diplomatic ties on Aug. 15, 1981, just two years after we attained Independence from our colonial master. One might say we were eager to chart our own destiny and forge new relationships with other likeminded allies. Taiwan and SVG are both built on a democratically free society and a democratic system of government that believes in basic human rights such as the right to life and liberty, freedom of speech, the right to work and education. Spanning the decades, both countries have enjoyed a fruitful bilateral relationship and a more meaningful people to people connection. Taiwan has aided in our development from a multifaceted approach in a way that positively impacts all aspects of our lives and livelihood.

For example, let us look at the modern Biotechnology and Probiotics laboratory at Orange Hill, which is a premiere facility of its kind in the Caribbean. This facility came to fruition through a joint bilateral agreement with Taiwan. The facility was designed for the production and sourcing of germfree planting material for many agriculture commodities. Today, far from its humble beginning as a tissue culture lab, the operation that was initially overseen by Taiwan personnel, can now boast that it is managed by a Taiwan-trained Vincentian, Rohan McDonald who holds a master’s degree in tropical agriculture. He manages the entire facility and has engineered its growth through infrastructure, production, scope, and output.

The Government of Taiwan over the many years of friendship, have assisted Vincentians by educating their children, through hundreds of bursaries to students in primary, secondary and tertiary level institutions. These bursaries have been used to purchase textbooks, uniform and other school-related expenses. I can speak firsthand of this, as I received a bursary to help complete my secondary education. Many young Vincentians today anticipate yearly, the now coveted and famed Taiwan scholarships as a means of furthering their education by going to Taiwan to read for bachelor’s, master’s and doctoral degrees at universities in Taiwan. In the early stages of the scholarship programme, very few Vincentians took up the opportunity, perhaps because it was a little-known cultural territory and the limited information possessed vicariously through a family or friend.

Personally, when the opportunity arose, I saw it as an adventure in discovering a new culture while making myself more marketable by gaining a university degree. There were three scholars the first year (2004), and five of us in the second batch the following year. The popularity of the scholarship has grown significantly that just a few weeks ago, 22 young Vincentians left our blessed shores to sojourn on a path and to a place that many Vincentians now have fond memories and deep bonds. This year’s batch of students brings to about 201 the number of Vincentians to have received these scholarships. I venture to state that to my mind, all Taiwan alumni would highly recommend, without hesitation, other Vincentians to be afforded the opportunity to further their education in Taiwan.

The Taiwan university scholarship programme has produced graduates in many disciplines, from horticulture, food science, biotechnology, marine engineering, mechanical engineering to medicine. Other opportunities for personal development ensued for our young people who were not able to matriculate to a tertiary level education. Taiwan has helped in jointly funding the Youth Empowerment Service (YES Programme), which provide training opportunities and work experience for young people between the ages of 16 and 30 years who have completed of school.

It must be highlighted that in recent years Taiwan has amended its labour policies, making it much easier for foreign university graduates like Vincentians, to seek gainful employment in their field of qualification and continue to live in Taiwan. This has significantly added to the small Vincentian diaspora in Taiwan. Other Vincentians have even cemented lasting relations by way of marriage to Taiwan locals and having children. This deep people to people connection continues to strengthen Taiwan and SVG relations. The opening of the Embassy of SVG in Taipei in August 2019, headed by Her Excellency Andrea Bowman, is a fortified symbol of our commitment and enduring friendship. By now every Vincentians probably knows of someone from their village, church, workplace, or family who is studying, studied or living in Taiwan.

Through Taiwan’s commitment via bilateral cooperation with SVG, Vincentians have benefited from copious projects that improved our livelihood, security and economy. For numerous years volunteers from Taiwan have served in many socially impacting programmes such as the medical teams that visit our shores from time to time providing much needed medical expertise in specialized areas and occasionally donating vital medical equipment. Others volunteer in the agriculture or information technology sector, and more recently in education, teaching Mandarin Chinese to our students at the Community College and the Girls High School. The Banana Revitalization Project, E-bus and CCTV project are some recent examples of how Taiwan continues improve our productivity and security.

Our relationship with Taiwan is not by any means one-sided. SVG has come to the aid of our friend, in several ways. When Taiwan had adversities by natural disasters, SVG made monetary donations towards the recovery process on three such occasion — once during the tenure of former Prime Minister Sir James Mitchell, and twice by Prime Minister Ralph E. Gonsalves. On a more grandiose platform, that of the United Nations, SVG continues its relentless advocacy for Taiwan to be a part of The UN special branch organs such as the World Health Assembly and the International Civil Aviation Organization.

This advocacy is not merely because of a relationship or friendship, but grounded on the evidence that Taiwan has proven itself to be worthy and a reliable nation. On his last occasion to address the assembly, Minister of Health Senator Luke Browne’s message resonated with the hearts of the 23 million people of Taiwan, and further cemented SVG as champion for Taiwan’s cause.

Recently, during the on-going COVID-19 pandemic, many international leaders have come to Taiwan’s praise as they displayed excellent leadership qualities as a true global player, in the exemplary way they handled the pandemic both domestically and abroad. Taiwan’s methodology in handling the pandemic was adopted by other countries, and they also donated vital health equipment like mask, PPEs, ventilators and PCR rapid test devices across the globe to countries such as the United States, New Zealand and SVG. This emanates Taiwan to be a mature and responsible global leader.

Like SVG, October is an auspicious month for Taiwan. Double 10, October 10, is celebrated as the National Day of the Republic of China (Taiwan), which will be 109 years this year. It is without a doubt that Taiwan has stood near us even closer than a brother during these 39 years of unbroken friendship. As we get closer to celebrating our 41st anniversary of Independence, let us extend our warmest wishes of peace and prosperity to the government and people of Taiwan. May our friendship ever continue to deepen and endure the test of time.

One reply on “Beyond diplomacy — SVG and Taiwan are friends”