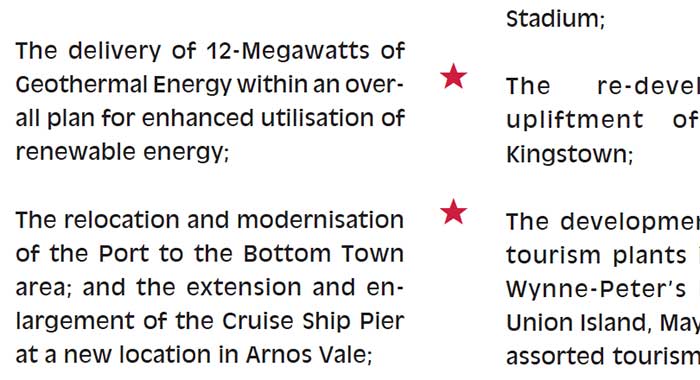 From the relocation of the port in Kingstown, to the geothermal energy plant, start-up of the building of a modern city at the Arnos Vale, the construction of a national stadium, and a hotel at Mt. Wynne-Peter’s Hope, the Unity Labour Party (ULP) has failed to keep many of the 15 major promises made in its 2015 election manifesto.

Dwight Fitzgerald Bramble, the main opposition New Democratic Party’s (NDP) candidate for East Kingstown, made this point at a party village stop in on Tuesday.

“I want to refer to the failed promises of this Unity Labour Party since the last elections because if I go back to 2001, we go be here until tomorrow night this time and I know we don’t have this time,” said Bramble, an economist and first-time candidate as he held a ULP 2015 election manifesto.

Reading from Page 4 of the document, Bramble noted that the ULP had said there were several major initiatives for full implementation over the next five-year period ending on Dec. 31, 2020.

The ULP said that among the central pledges was the further creation of jobs and wealth.

Bramble noted that the ULP had said elsewhere in the manifesto that they would have created 9,000 jobs in the 2015-2020 electoral term.

“This is realisable given the opening of the international airport; the geothermal development; the modern city at Arnos Vale; the Port modernisation and extension of the Cruise Ship Pier; the major tourism developments in Mt. Wynne/ Peter’s Hope, in Bequia, Canouan, Union Island, Mayreau, and apartments for medical schools’ students; the initiatives in agriculture, fisheries, manufacturing, ICT, assorted services, and construction; the impact of the Education Revolution; and the Public Sector Investment Programme,” the party said in its 2015 manifesto.

Bramble said that despite this promise, SVG has “one of the highest unemployment rates not only in the region, but in the world”.

Bramble noted that the ULP also said they would “push to Zero Hunger and the further reduction of poverty”.

Bramble, apparently saying “Census” instead of “poverty assessment”, said that the last time such a report was produced was in 2008.

“That is 12 years ago. At that time, it was determined that the level of poverty was at least 48.2% of people living at or below the poverty line.”

He noted that the figure represented close to 50,000 persons.

“When you are determined to be living at or below the poverty line, it means that in St. Vincent and the Grenadines you are living on $420 a month or less. That is $14 a day – 50,000 people and that is just the official figure.

“They have not done another census or a poverty assessment since then.  But I understand that a poverty assessment was done last year, lots of money was spent to do it and they are afraid to publish the report. But the reality is, you all know and you feel the pain and there are many of you here tonight living on less than $420 a month,” he said, noting that Public Assistance is EC$250 a month.

“And our prime minister has the gall to proudly say that he will be increasing the number of persons on poor relief next year. Can you imagine that?”

Bramble said that in every society there will be people who need that kind of assistance.

“But when you check out some of the people on poor relief, is big, strong, young people who could work and who are willing to work but they ain’t get no work to do, so they have to go on poor relief.

“The broken promises of the Unity Labour Party, that should be the reason, if there is no other reason, and there are lot of other reasons why on Nov. 5, you go out there and vote and you vote overwhelmingly for Fitz Bramble and the New Democratic Party.”

He said that the ULP has delivered on its manifesto promise regarding the opening and operation of the Argyle International Airport.

“They campaigned on that in 2015 so they can’t come back with that,” Bramble said, however.

He said that while the ULP promised “the delivery of 12-megawatts of geothermal energy within an overall plan for enhanced utilisation of renewable energy”, the country got “three dry well” from the project.

The government had said that it had secured US$92 million in financing for the project.

Another ULP manifesto promise was the relocation and modernisation of the Kingstown Port to the Bottom Town area; and the extension and enlargement of the Cruise Ship Pier at a new location in Arnos Vale.

“We still waiting pon that. They say until Dec. 31 so we still have a couple ah months. Maybe they go deliver it by then,” Bramble said.

The ULP had also promised the “further modernisation of the Milton Cato Memorial Hospital, and the relocation of some of its major departments to, and enhanced health delivery at, an acute referral hospital to be built at Arnos Vale”.

“Big, big failure!  As a matter of fact, the Milton Cato Memorial Hospital has deteriorated significantly since 2015 and at the rate at which we are going, we might not have much of a choice between the hospital and the cemetery pretty soon. The New Democratic Party will make sure that does not happen.”

The start-up of the building of a modern city at the Arnos Vale site of the E.T. Joshua Airport consequent upon the commencement of operations of the Argyle International Airport has also not happened, as the ULP promised.

And the ULP had promised “the rolling-out of the most ambitious programme ever of road construction and rehabilitation (including bridges), and the building of sea and river defences”, Bramble said:

“You guys ever drive through Murray Village-Rockies? You don’t even have to drive, walk through. … All kinda potholes, your foot going in and slipping.

“This is the government’s contract to the people of the country for 2015,” he said of the manifesto.

“The construction of the National Stadium’ is another promise. Where is it? We’re still waiting,” Bramble said.

The government has, instead, opted to build an athletic track with bleachers at Diamond, although the national stadium was among the promises on which the party campaigned for the 2001 general elections, when it first came to office.

In 2015, the ULP also promised “the re-development and upliftment of capital city, Kingstown” Bramble noted.

“And I can go on and on. The point I am making is that almost every promise that this government has made has failed and that is why St. Vincent and the Grenadines finds itself in the economic quandary that it now experiences.”

Bramble said that the unemployment rate is 26%, adding that when the ULP came to office, it was around 19%.

“Since 2001, the unemployment rate in this country has not gone below 20%. Right now, as I speak to you, it is about at least 36%. The official figure is 26% but even the minister of finance admitted that because of COVID, and this was way back in March, the unemployment rate shot up to about 36%. And I am quite sure that between March and now, it has escalated even higher,” he said.

2 replies on “ULP fails to deliver on major manifesto promises”