Tomorrow will be brighter than today,’ MP tells North Windward 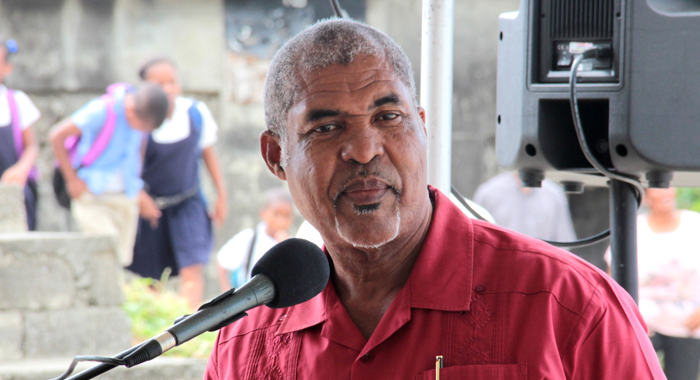 As he seeks a fifth term as parliamentary representative for North Windward, Montgomery Daniel is promising constituents a brighter future under his Unity Labour Party administration.

Daniel, an agriculturalist, who is in around 67 years old, is facing a challenge from first-time candidate, educator Shevern John, 42, of the main opposition New Democratic Party.

“And so, as we go forward in our fifth term, the constituency will continue to see further progress,” he said.

He said that a new secondary school will be built in Sandy Bay, a new arrowroot factory at Orange Hill, and sea defence at Sandy Bay.

“We would consolidate the operations at Langley Park at the boxing plant for the purchase of farmers’ produce. We will create further linkages between our indigenous peoples across the world. We will further have expansion of the hosting programme. We will twin the medical marijuana industry with the arrowroot industry; we would continue to distribute housing lots, we will continue to have housing programs being built,” Daniel said.

“We would establish a playing field at Langley Park so that we will be able to move on. And so, comrades, your government has done well, your representative has done tremendously well, leaving an indelible mark for those to come. I want to ask of you, on election day, go out and vote labour for your future is better with Labour.”

Daniel told the virtual campaign event that when he came to office in 2001, “conditions were indeed terrible” In North Windward.

He noted that a 1997 report had found that indigent poverty nationally stood at 27%.

“But in the constituency of North Windward, indigent poverty, according to the report, stood at 67%,” Said Daniel, who gave no indication of how the situation has changed during his tenure.

The ULP administration is yet to release the latest poverty assessment figures, which is almost three years behind schedule.

Daniel said that the NDP, during its stint in office from 1984 to March 2001, had closed the sugar industry, which had provided jobs for some 2,000 persons

The Orange Hill Estate was closed, he said, adding that it had provided jobs for some 450 persons.

“The arrowroot industry was finally sold in March 2001 before the elections. All these job-creating avenues all went under the last administration,” Daniel said.

However, in North Windward that figure was 19%.

“And the report also indicated that the dropout rate was up to 65% in some cases. It meant, therefore, that some seven to eight persons actually complete secondary education. For me, it begs the question, if that is the case, what are the grades that those who finish school?  What grades would they have had?” Daniel said.

“And I can say to you this year, the school has given, through its CXC exams results, a pass rate of 71%.

Daniel, who is also Minister of Housing, said that before the ULP came to office in 2001, the housing condition, especially in the Garifuna communities, were “indeed terrible: board structures dominated the housing in that area.

“And even if you did not share in that, the young professionals, they also are benefiting from a 100% mortgage at all of the commercial banks.”

He said that the ULP has also helped the aged and needy, who benefit from the Lives to Live programme.

Daniel also commended the state-owned Housing and Land Development Corporation (HLDC) “for the tremendous work they have done over the years, ensuring that this country would have seen approximately 1,900 houses built within the last 20 years this government is in office”.

He also noted the construction of the Rabacca Bridge in 2007 before which “access to the constituency of North Windward was indeed terrible crossing the number of rivers was indeed a nightmare.

“Many lives, many properties were lost at the Rabacca River.”

Daniel said the ULP administration has built many.

“This is a government that cares. So under the ULP administration, the constituency of North Windward and the wider St. Vincent and Grenadines have benefited from the many initiatives, policies and programmes that have been laid out over the last 20 years,” Daniel said.

He said the arrowroot industry has been revived and this year 127 farmers benefited from pay-outs of $1.7 million.

“We … have seen improvement in networks of road, particularly from Georgetown to Fancy and a number of village roads. We … have seen the establishment of a fishing complex at Owia, boats have it now easier for its berthing and the facility employs approximately 42 persons at any one time.

He said the Owia Police Station and Owia Primary School were refurbished, and a training institute built at Orange Hill.

“Particularly at the time when the banana industry was in deep trouble, we had to ensure that we retrain our farmers to meet the competitiveness that was facing the agricultural sector,” he said, referring to the training institute.

“We … have distributed hundreds of building lots in that constituency. We built a learning resource centre at Sandy Bay, where adult and continued education can be had. We have built and established a sea defence at Langley Park and we have established pre-schools at Owia and Langley Park,” Daniel said.

4 replies on “Tomorrow will be brighter than today,’ MP tells North Windward”