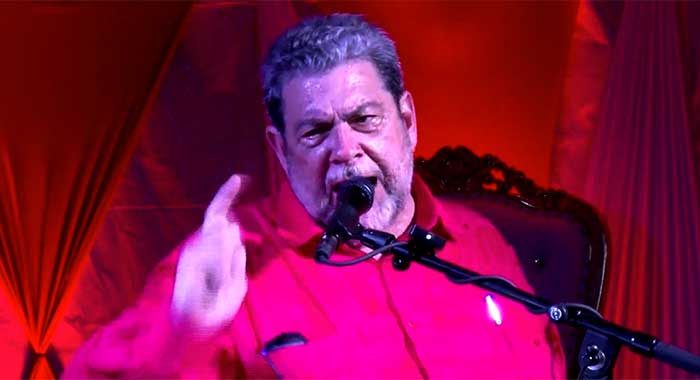 And using language that in local parlance is often interpreted as threatening, Gonsalves said that if these alleged financiers set foot in St. Vincent and the Grenadines, they would not leave.

“I tell you, the NDP campaign is controlled, paid for and run by foreigners based in Switzerland and in Hong Kong. Run by passport sellers.  They hire the successor to SCL to try to steal up the mind of Vincentians,” Gonsalves told party supporters in Georgetown at the opening of his campaign headquarters for North Central Windward, which he has been representing in Parliament since 1994.

“But I am telling them, if they put foot in St. Vincent and the Grenadines, they will not leave here. They could run the campaign from overseas,” said Gonsalves, who is also minister of national security.

Gonsalves noted that former prime minister, NDP founder Sir James Mitchel has said that the Nov. 5 general elections are for the soul of the country.

“I agree with Mitchell. And Friday, Mitchell and the NDP want to sell the soul of St. Vincent and the Grenadines to foreigners by selling the sacraments of nationhood: passport and citizenship,” Gonsalves said.

“I want to say this:  never will Vincentians, the children of Chatoyer, will allow our passport and allow our citizenship to be sold as if it is eddoes and tomatoes and dasheen and sweet potato. No way!”

He said that between 1764 and 1795, for 31 years, Paramount Chief Chatoyer and the Garifuna and the Calinago fought foreigners over the soul of SVG.

“Chatoyer was defeated by superior arms. I will tell those foreigners this, we will fight to our death; we will never sell our passports or our citizenship

“It doesn’t matter. I’m telling you this; you think that we in Labour will ever allow things like that to happen?”

Gonsalves, stating,  “we have our intelligence”, said that a speech that Opposition Leader Godwin Friday delivered on Oct. 9,the day after election were announced, was written by foreigners.

“That speech had absolutely nothing to do with St. Vincent and the Grenadines.   The speech could have been written for people in Iowa running for state election, in Brussels, in Burkina Faso, in Ecuador, a lot of general bromides,” Gonsalves said.

“I am telling you, Friday and his team have no creative juice in them, they are a bunch of mimic men and women, wanting to sell this country to the highest bidder in relation to the passport.  Never will that happen,” the prime minister said.

“I want to tell them this, the man who you see standing in front of you, I am an ancient warrior, I am accustomed to all kind of struggle. And I am telling you, cut that foolishness out. And Leacock and Cummings and all of you, from tonight, I tell you stop that damn nonsense.  And I am serving notice on all of them, all ah them,” Gonsalves further stated.

Gonsalves’ ULP is making a bid for a fifth consecutive term, while Friday is leading the NDP into election for the first time.