Poverty in N. Windward moves from 55 to 66% under ULP — Cummings 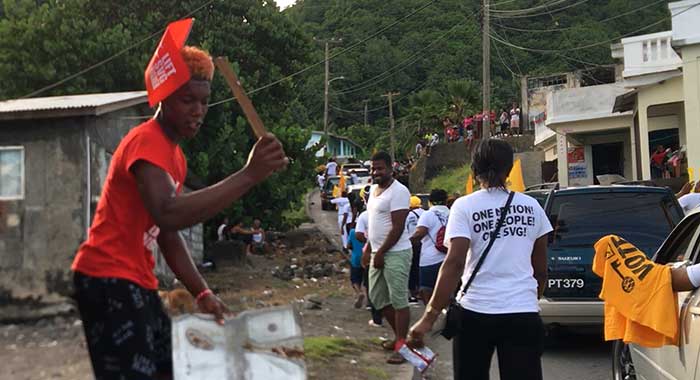 A man donning ULP campaign paraphernalia beats a sheet of metal and mocks NDP supporters as they walk through Sandy on the way to Owia on Sunday. (iWN photo)

Poverty in North Windward — traditionally the poorest constituency in St. Vincent and the Grenadines — increased by 10 percentage points between 2008 and 2018, opposition politician Daniel Cummings said on Sunday.

For the second time this past weekend, Cummings quoted what he said are the findings of the 2018 Poverty Assessment, which the Unity Labour Party administration is yet to release, almost three years later than scheduled.

“It is no accident that we are in North Windward here tonight. I have been telling you that this wretched, evil, wicked government has been pushing under the rug the poverty assessment report they did in 2018, long before there was COVID,” Cummings told the New Democratic Party candidate launch in Owia.

“In other words, North Windward under Mont—whatever he name, your poverty went 10 percentage points higher and two out of every three people in North Windward can’t put food on their table, have to survive on $14 a day. And they want you to vote for that?” said Cummings, who is making a bid for a third term as MP for West Kingstown.

The ruling Unity Labour Party’s Montgomery Daniel has been representing North Windward since 2001 and is making a bid for a fifth term.

His challenger is first-time candidate, the NDP’s Shivern John, who is being billed as “a breath of fresh air” in the constituency.

“My dear lady, God, has blessed you,” Cummings said, taking John by the hand.

“You ain’t no accident. What a breath of fresh air. Oh lord. Look at her, eh.  Ah telling yo’ North Windward, with this lady as your representative, you see what you have for a health centre here in Owia is a joke.

“Listen to this, your New Democratic Party, led by Dr. [Godwin] Friday will give you a brand new, real hospital, not something on a mock up, not like what they do on the airport now when they promise you 10 years ago.”

He was speaking in apparent reference to the acute referral hospital that the government is proposing to build at Arnos Vale, an artist impression of which the ULP has erected on a build board as part of its campaign for the Nov. 5 elections.

“NDP will deliver you the best health care in St. Vincent and the Grenadines and we will add to that the national health insurance scheme, which mean you wouldn’t have to beg anybody,” Cummings said.