Shevern John — ‘a breath of fresh air’ in N. Windward 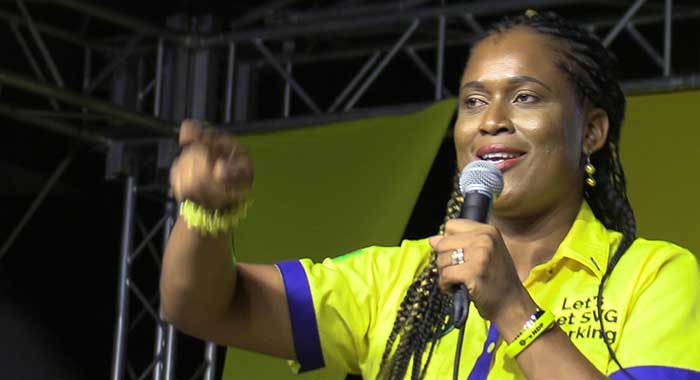 Political newcomer, Shevern John, the NDP’s candidate for North Windward, has been billed as “a breath of fresh air” in the constituency. (iWN photo)

Educator and political newcomer Shevern John, the opposition New Democratic Party’s candidate for North Windward made her first major political speech on Sunday, promising to address issues that make the district the poorest in the country.

John, who has been billed as “a breath of fresh air” as she seeks to unseat four-term MP, Montgomery Daniel of the ruling Unity labour Party said,

“The people of North Windward have been suffering for too long. We deserve better, but I want to tell you, don’t go down, hold your heads above the water, because, one day must get better,” she said, echoing Jamaican artiste Buju Banton.

John was speaking at a rally at which the NDP formally launched, two days before nomination day, its full slate of candidates to contest the Nov. 5 general election.

“What you see here tonight is woman’s power,” John said, as she embraced Laverne Gibson-Velox and Kay Bacchus-Baptiste, the two other female candidates for the NDP in the election.

“I stand here tonight as your proud Carib warrior; a proud Garifuna woman,” John said, using both words that are used to describe indigenous Vincentians, a significant population of which live in North Windward.

“And we stand here as women, dignified, full off integrity, waiting for the opportunity to represent you in the house of Parliament. I want to be your voice,” John said.

She said that she had been among the people of North Windward for the past 28 weeks, an apparent reference to the duration of her campaign.

“And I have lived among the people all my life and I stand here to represent you for the rest of my life,” John said.

“I would tell you something, I never see myself as a politician. I see myself as a transformational leader, waiting to represent you and to serve you, the people of St. Vincent and the Grenadines.

“I am an educator and I am a community builder from this little village of Owia who practises what the Lord instructs through the preacher Solomon in Ecclesiastes 9:10, ‘Whatever you do, do well. For when you go to the grave, there will be no work or planning or knowledge or wisdom.’ So whatsoever I put my hands to, I am doing it to the best of my ability to make North Windward work.”

John said that the country’s poverty assessment shows that Sandy Bay, a North Windward community, has the highest rate of poverty in St. Vincent and the Grenadines.

“Now, that should be so vexing to anybody. When we have a village that has been supporting a ruling party for so long, that village could have been one which is highly developed.

“But a New Democratic Party is not going to leave you poor. They are going to empower you. And that’s why we are going to create jobs for you so that you can spend your own money.”

John said that North Windward is a very sustainable constituency, adding that the district depends on agriculture, which helps to create the middle class.

“But this present administration killed agriculture, so now there is no middle class. You have the rich and you have the poor and the rich is only for the chosen few. And the poor has to stay poor.”

The candidate said that an NDP administration will revive agriculture, create jobs in the sector and implement information technology in agriculture.

She said that the arrowroot and cassava factories are both “dead”.

“What factory has been built in 19 years under this administration?” she said, referring to the number of years since the ULP has been in office.

John said she is a teacher and loves education.

“I love my students. They can tell you that. I don’t mix with them and I don’t play with them but when it comes to my work, I ensure that they get it done. You know what I will tell them, ‘When I am finished with you in the classroom, you are going out there in the world of work to be better men and women. If you want to pass me straight, pass me straight, but I would have done my work.’

“And I am telling you tonight that when you vote for me to represent you. I am going to do the same thing. I am going to make you better. Your standard of living will be better. You are going to get jobs. You are not going to depend on anyone, but the government is creating jobs for you and your children,”

John said that amidst the talk about education revolution, she is in the system and, therefore, knows what is taking place in the classroom.

“We are happy for an education revolution, but it is the way it is implemented. When you take children and push them into the secondary school, teachers are not equipped to deal with learning disabilities. How is it that you are going to learn? The school itself is not equipped.

“If you look at the physical structure of the Sandy Bay secondary school, which I am a proud teacher of, because I do my very best there. I ensure that when I go into the classroom that your children are well taught.”

John said that an NDP administration will ensure that the curriculum is revised “so that we can teach children to be 21st century learners. That’s what we want.’

She said that she will ensure that better health care is provided in every village in North Windward, adding that Dickson has not had a health centre in years.

Roads in the constituency are dilapidated, John said, adding:

“Now you’re running to come fix roads. You’re insulting people. My people, in Dickson, I am going to ensure that there is a health centre for you. We want bypass roads in some of our village. If you go up to Overland where the children are walking to go to school, your heart will drop.”

She said there is a road that had been damaged since 2013 and has not been repaired even as “cement is somewhere being tough”.

“We deserve better and I tell you, my people, don’t you go down. Hold your head above the water. Things are going to get better.”

She said that the NDP will ensure there is market for farmers so that they will know for sure that they have somewhere to go and sell their crops.

“My people of North Windward, don’t give up, the fight is real. … Make sure you go out and vote NDP and Shevern John on Nov. 5, because a breath of fresh air is sweeping through the country and it starts from North Windward.”

3 replies on “Shevern John — ‘a breath of fresh air’ in N. Windward”