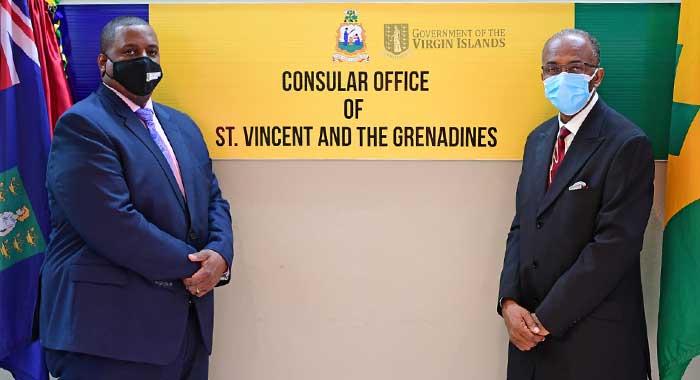 Bishop Ishmael Charles, honorary consul of St Vincent and the Grenadines and Andrew Fahie, Premier and Minister of Finance in the British Virgin Islands. (Photo: Gov’t of the BVI website)

St. Vincent and the Grenadines, on Friday, became the first CARICOM country to establish a consulate office in the British Virgin Islands (BVI).

In a virtual ceremony, Bishop Ishmael Charles, a Vincentian who has been living in the BVI for over 40 years, was appointed Honorary Consul of St. Vincent in the British Virgin Islands.

Speaking at the ceremony, Sir. Louis Straker, Deputy Prime Minister and Minister of Foreign Affairs, Trade and Commerce in St. Vincent and the Grenadines, said the consulate opens a new avenue for “an active trading relationship with the British Virgin Islands”.

Sir Louis also highlighted that the relationship will further create linkages in education, tourism and culture where training and exchange programs can be made a reality, creating mutual benefits for both countries.

These sentiments were further reiterated by the Premier and Minister of Finance in the British Virgin Islands, Andrew Fahie.

Fahie said the establishment of the SVG Consulate Office will “deepen the level of cooperation between the governments by collaborating to develop opportunities for trade, in areas such as agriculture, manufacturing of goods and services”.

He said the partnership will help the economies of both countries and further said, “… the formalisation of this relationship is only the first step in paving the way and creating the architecture for intra-regional trade”.

Meanwhile, Charles said he was honoured to serve as honorary consul to the more than 2,000 Vincentians living in the BVI and to work diligently to strengthen the relations between both jurisdictions.

One reply on “SVG opens consulate in BVI”