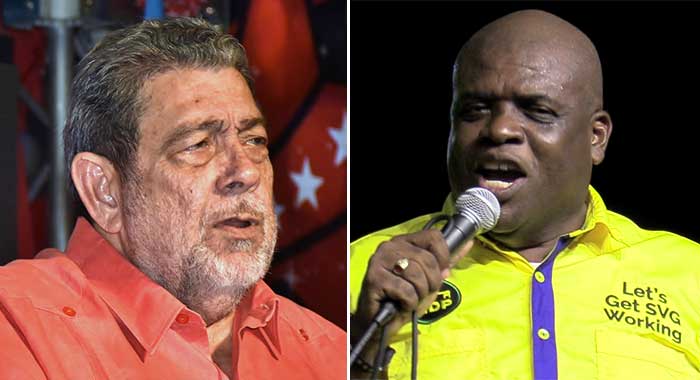 The battle continues between the two main political parties for the vote of marijuana farmers in St. Vincent and the Grenadines, with opposition politician Roland “Patel” Matthews saying he is the only candidate who has been a ganja farmer, and, therefore, best understands the issues.

“I am telling you that when I was called as a young man to come to teach, I was a ganja farmer so I looking out for the interest of all ganja man because I know the struggle; I know the frustration, and that is why I am fighting for the ganja man,” Matthews, incumbent MP for North Leeward told a New Democratic Party (NDP) rally in Owia on Sunday.

Matthews restated that an NDP administration would legalise two ounces of the plant for recreational use and that traditional farmers must benefit from any changes in the law.

But, two days, later, on Tuesday, Prime Minister Ralph Gonsalves presented Matthews’ proposal as reckless and called on the major Christian denominations in St. Vincent and the Grenadines to voice their opinions on it.

Gonsalves even went further, suggesting that vendors would offer marijuana outside schools and children would consume it during school time — although that is not the case with tobacco cigarettes and alcohol, both of which are legal and considered to be as, if not more dangerous than marijuana.

At the event in Owia, where the NDP presented its slate of candidates for the Nov. 5 polls, Matthews said that agriculture has been the mainstay of the economies of areas such as North Leeward.

He, however, said that what exists under the ULP in the constituency, as well as the rest of the country, is an insult to the farming community.

He told marijuana farmers that the NDP recognises the importance of ganja and that the world over has had a change in attitude to the plant since it was found to have medicinal value.

Matthews noted that the NDP supported in Parliament, in 2018, laws brought by the ULP to reform the nation’ ganja laws.

“We made one thing absolutely clear: that whatever is done, the ganja farmer, the struggling man, must benefit. But what we are experiencing now is that this administration, this wicked government, has brought forth ganja legislation and the poor ganja farmers are suffering.”

“How could you tell me that in today’s world that you legalise the planting of marijuana but yo’ still locking up a man for a spliff (marijuana cigarette). It nah right. The New Democratic Party, we will be legalising at least two ounces for recreational purposes.

He said that the NDP means it when it says, “With this ganja thing, SVG, we have to make money.

He said that farmers in various mountains across the country have been struggling too long and the NDP, “we are going to lift ganja man higher and higher – we’re the only party that is going to lift the ganja farmers.

“You know why? Ganja farmers, you have to be respected man. Too long inna that.”

He said that that North Leeward has the highest number of marijuana farmers – more than Central Kingstown and North Central Windward where there is some cultivation.

Noting his experience as a ganja farmer, Matthews, a Petit Bordel resident, said:

“So, in order for it to stop, you must vote for the New Democratic Party. We are the only party that care, that [is] concerned for the ganja farmers and that is why we have to get rid of them and we have to make sure that when you go to the polls [on] election day, get rid ah dem,” he said, referring to the ULP.

But, on Tuesday, Gonsalves said it was appropriate to say that locking up someone for a marijuana cigarette ‘nah right”.

“Of course, it nah right because it not happening,” the prime minister said, adding that his government instructed subsequent police chiefs not to charge persons for especially small quantities of marijuana.

The prime minister spoke of international conventions governing marijuana, adding that to work around them, his government de-penalised small portions of marijuana by saying it is illegal but there is no consequence to the illegality.

Gonsalves said that Matthews thinks he has a constituency on the ganja farmers but the ULP has already taken that away.

The prime minister, noting Matthews’ proposal for possession of two ounces and cultivation of five trees, said that marijuana plants can grow up to 10 feet tall.

“So everybody in their backyard go have 50 feet ah ganja. And every child in the house could go and take it and roll a spliff in the morning before they go school, before they have breakfast.

“How does that square with the 14% of the population in the Seventh-day Adventist church who proclaim, and rightly so, the teachings of good health, with Ellen Whyte,” Gonsalves said.

“You can’t get lock up for ganja, small quantities, in this country today. You ain’t going jail for it; you can’t have a record for it, who did that? The ULP. But to say you going legalise it and leh everybody smoke it how they want–” Gonsalves said that suggested that marijuana would be sold outside schools and student would use it before attending their classes.

The prime minister said that people might be dismissive of Matthews, but Opposition Leader, Godwin Friday, who spoke after Matthews, said:

“Patel told you of the great plans we have in North Leeward for the ganja farmers, that they must be part of the medicinal industry and the recreational ganja industry.”

Gonsalves said: “Patel spoke before him and set the parameters. Friday weak. He can’t even stand up and say Patel might have gone a little too far, leh me pull it back.

“Remember that you’re going to have a problem in collecting your Western Union money, because the issue of money laundering comes in. You ha’ to wonder about your MoneyGram money and that the banks in St. Vincent and the Grenadines will get cut off from the correspondent banking status,” he said.

One reply on “Battle rages for SVG’s ganja vote”