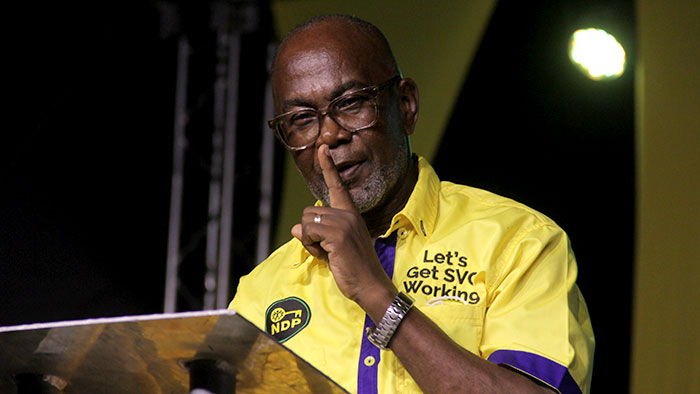 The most recent Director of Audit report strengthens the case for a constituency development fund, says incumbent MP for Central Kingstown, St. Clair Leacock, who has been making a case for such a budgetary allocation.

Minister of Finance, Camillo Gonsalves tabled the report — on government spending in the year 2014 — in Parliament on Oct. 8, the last meeting of the last Parliament, which was dissolved one day later.

This means that the Parliament, which expired in 2015, and the one that came after, was in no position to debate the report, even as those for the subsequent years are running as many as six years behind schedule.

The proposed constituency development fund would allocate monies to be spent to execute small infrastructural development projects in constituencies, regardless to whether they are represented by a government or opposition parliamentarian.

The ULP opposes such a fund.

Speaking at the New Democratic Party’s (NDP) manifesto in Petit Bordel on Saturday, Leacock said he wanted the public to “grasp and understand a fundamental difference” between his party and the ruling Unity Labour Party (ULP) as it relates to the link between the proposed fund and job creation.

Noting that the most recent Director of Audit report is for 2014, Leacock said “… the first thing you must understand when I say that, it means the Unity Labour Party government that came into office in 2015 and leaves this year, in 2020, leaves unaudited and unaccountable to you, the good people of St. Vincent and the Grenadines.

“It is a travesty of good governance. That, by itself, is serious.”

He noted that an observation of the report “goes to the root of the corruption and what’s wrong in St. Vincent and the Grenadines and why the more jobs, the more opportunity, the better health care, social systems and safety net is not being delivered”.

He noted that in the report, the Director of Audit points out that contrary to the mandates of Section 76 of the Constitution of St. Vincent and the Grenadines, no Public Accounts Committee (PAC) was appointed in 2014.

The PAC is responsible for considering all the accounts that the director of audit is mandated to audit in conjunction with her report on the public accounts and report to Parliament the reasons for any excess unauthorized expenditure of public funds, any measures it considers necessary in order to ensure that public funds are properly spent; and such other duties related to Public Accounts, as the house may periodically direct.

Leacock said: “It is a constitutional requirement that there be a Public Accounts Committee. The Ralph Gonsalves government did not appoint a committee in 2014 to look at the reports prepared by the Director of Audit, so nobody knows how the monies of the country is spent, being spent, or intends to be spent.”

He said that in examining the report, “you began to understand why life is hard, tough, rough, for so very many Vincentians”.

The opposition politician, who is seeking a third five-year term as MP for Central Kingstown, said that the report shows that of the EC$18 million dollars voted, and later revised to EC$20 million for the Ministry of Transport in 2014, only $12 million was spent.

“In short, the government consistently fails to spend the money approved by the parliament, but creates an impression that all is well,” Leacock said, adding, “Now I painfully go through this to get to the Constituency Development Fund because here lies is the root of the problem.

He said that in 2010, Parliament approved EC$309 million in capital spending, but the government only spent EC$83 million or 27%.

“… The truth of the matter is, if we have been making, as indeed we are, that there is a case for constituency development funds, you can be assured that had we put such a system in place, those monies that are year after year, after year, going back unspent, would have been spent in every single constituency in St. Vincent and the Grenadines, improving the lives of all Vincentians.

“So, you know, to be sure that a New Democratic Party coming into office, properly interpreting our Constitution will not take you, our people, for granted.”

Leacock said that an NDP administration will ensure that representatives “are empowered to do, as we say, the little things that mean big things in all of our constituencies.

“That means the small shop comes alive; it means improved road maintenance, better and quicker response to health needs. The people in marginal living conditions by the riverbanks will be taken care of; so, too, would be our elderly.

“And in large measure, we would have far more Vincentians employed and responding as active participants in our Vincentian society.”

Leacock said this means “we have to look at a reform of our public administration machinery and the proper interpretation of our Constitution that frees up the wealth of the country, focuses on the individual and involves at the local level, our people in the decision making process so we can intrude and, in fact, have a better St. Vincent and the Grenadines”.

He implored listeners not to return to office, the ULP, which he said is “a regime that simply hands out a mirage, a false image to give one the impression that things are happening for you when in reality, all that they are doing is looking at themselves and running fast to stay in the same place.

“This will not happen in a job-creating party led by Dr. the Honourable Godwin Friday, and my competent team of colleagues that will be supporting our esteemed leader in transforming St. Vincent to greener pastures,” he said, referring to the NDP president and opposition leader.

“And by our decision making, we will change the government for all time and get ourselves to the promised land that will ensure for us a better St. Vincent for generations unborn.”

“My brothers and sisters and family in this great New Democratic Party. Go forward. Go boldly, go proudly. Go honestly; go with integrity, but go with a determination for transformational change that you, in this election on November the 5th, made that difference by changing government for all time.”