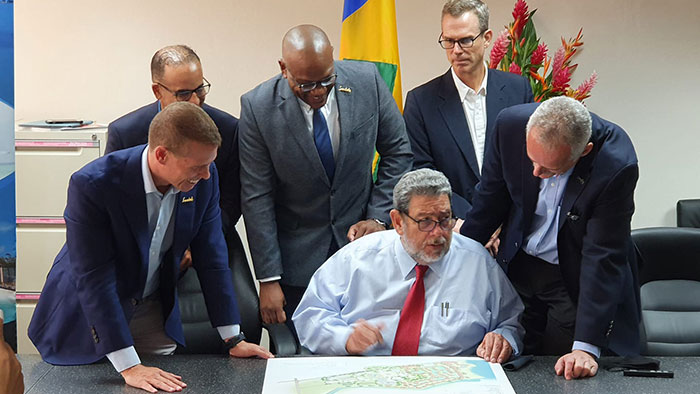 A meeting between Prime Minister Ralph Gonsalves and other government officials and representatives of Sandals Resorts International is raising questions about enforcement of COVID-19 quarantine in St. Vincent and the Grenadines (SVG).

Photos posted on Facebook by Minister of Finance, Camillo Gonsalves and communication from Invest SVG, a state agency, suggests that the Sandals officials flew into the country on Monday, met with the government officials and left without undergoing quarantine.

Aviation sources have told iWitness News that the private jet on which the Sandals team arrived, departed from and returned to Jamaica’s Sangster International Airport on Monday.

However, based on the photographs, only one person in the meeting was wearing a face mask, and the recommended physical distancing was not observed.

This was the case although since September 2020 community spread of COVID-19 was confirmed in Jamaica, which remains one of the source countries from which travellers to SVG must quarantine for five to 16 days.

The Ministry of Health on Sunday announced the latest COVID-19 protocols, to run Oct. 26 to Nov. 10.

“It is aimed at addressing the increased risk of the introduction of new cases of COVID-19 into St. Vincent and the Grenadines because of the escalation in new COVID-19 cases in North America, Europe and the Caribbean region,” the National Emergency Management Organisation (NEMO) said.

“This external escalation of new cases, coupled with the in-country election campaign associated mass gatherings, has the potential to increase the risk of local spread,” NEMO further stated.

The protocol states that all travellers to SVG — except those arriving from Barbados after being there for at least 21 days — must arrive with a negative SARS-COV-2 RT-PCR COVID-19 test result.

The negative result must be for a test done no more than five days (including the day of arrival) before arrival and the traveller would be retested for COVID-19 (RT-PCR) on arrival in SVG.

On arrival, the traveller must undergo a mandatory five-day quarantine in a Tourism Authority/MOHWE approved transition/quarantine hotel at their cost and must arrive with proof of the fully paid reservation.

Further, the traveller must transfer to the transition hotel in an approved AIA taxi or approved vessel (plane or ferry) at their expense.

They must then be retested between day four and day five of quarantine and must continue nine to 16 monitored days in an approved home/hotel/vessel at the discretion of the port health officer.

The Sandals meeting comes even as the Ministry of Health had reiterated that it had received several requests for exemption for quarantine, all of which had been denied.

The ministry, in a Facebook post on Monday, said it had received “several calls and emails from a number of returning nationals and visitors requesting exemption from quarantine to attend funerals, weddings, family gatherings or running errands.

“Please note that we are NOT granting exemptions,” the ministry said and itemized the quarantine requirement, saying that no exemption would be granted for any or each of them.

“Let us keep Yurumein safe! Let us keep Hairouna safe!” the post said, referring to the country by its indigenous names.

However, posts on the finance minister’s Facebook page as well as those of other government officials suggest that Adam Stewart, deputy chairman of Sandals Resorts International, and his team, flew into the country on a private jet for the meeting on Monday and left that same day.

Also in the meeting with the prime minister were Minister of Tourism Cecil “Ces” McKie and Orando Brewster, who is representing Gonsalves’ Unity Labour Party in Central Leeward in the Nov. 5 general elections.

In a Facebook post Monday evening, the finance minister spoke of a “fantastic meeting today with Adam Stewart and his Sandals team about the 350-room Beaches Resort to be built at Buccament Bay.:

The ULP government has taken a loan to purchase the resort, which had been closed since December 2016, and is selling it to Sandals, which will operate a Beaches Resort there.

The government has said that Sandals made, in July, a 10% down payment on the US$17.5 million (about EC$47 million) price tag for the resort.

Sandals was expected to pay the remainder of the sum within 90 days — which expired on Oct. 22 — to hold full title of the property.

However, there has been no indication from the government on whether the full payment has been made.

In July, the finance minister said that Sandals had shared with the government a timeline for the opening of the new property, but they had asked the state not to disclose it then, “given the uncertainties related to COVID”.

However, in his post on Monday, the finance minister said that Sandals presented their more detailed master plan, design, and advertising vision.

“Serious construction begins in April and will employ 1,000 tradespersons,” he said, adding that Sandals is targeting December 2022 for the opening of the resort, “at which time, it will directly employ 800 Vincentians at the outset”.

Gonsalves said that the name “St. Vincent and the Grenadines” will have 6-8 billion media impressions in 2022-2023 (print, TV, online) thanks to the Sandals advertising machine.

“Good governance disclaimer: No passports were harmed or sold in the making of this development,” he said, referring to the citizenship by investment programme proposed by the main opposition New Democratic Party.

Meanwhile, on Monday, the government announced that the country had recorded one additional case of COVID-19, a traveller who arrived from Italy, travelling through France and Martinique before arriving in SVG on Oct. 23 with a negative PCR result.

“The adult tested positive on entry screening and will remain in isolation until cleared with two negative PCR results,” the National Emergency Management Organisation (NEMO) said.

The Ministry of Health said on Tuesday that SVG has recorded 74 cases of COVID-19, with five active cases remaining and five results pending.