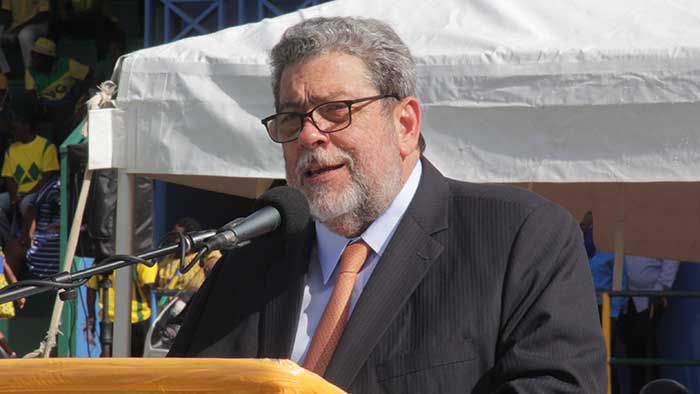 Prime Minister Ralph Gonsalves used his Independence Address, on Tuesday (today), to restate old promises — some unfulfilled after years — and to make new ones, nine days before Vincentians go to the polls.

Amidst the COVID-19 pandemic, St. Vincent and the Grenadines is celebrating its 41st anniversary of independence from Britain, and a small crowd turned out at Victoria Park to witness the military parade in celebration of the event.

Just four guards of honour were on parade at the scaled-down event where temperature checks, facemasks, and hand sanitisation protocol were implemented, and many of the uniformed bodies across the country were excluded.

The highlight to the prime minister’s speech, as has become the norm over the past few years, was his announcement of “goodies” for various categories of citizens. In the Nov. 5 vote, Vincentians will to decide whether to return Gonsalves and his Unity Labour Party (ULP) to office for a fifth consecutive five-year term or to replace them with the main opposition New Democratic Party (NDP).

“First, as of January 1, 2021, provision will be made in our Budget to ensure the appointment of all public servants who are university graduates as we have been doing year by year for all the graduate teachers. This initiative will benefit directly over 100 persons,” Gonsalves told the parade and media audiences.

The announcement was an echo of one he made in 2018, when he said that 120 graduate teachers who obtained their university degrees between 2013 and 2015 would be appointed in January 2019.

But head of the St. Vincent and the Grenadines Teachers’ Union, Oswald Robinson told iWitness News on Tuesday that no graduate teachers were appointed this year, even as a number of them are awaiting appointment.

He further said that there are over 50 senior qualified assistant teachers, some of whom have been waiting for 15 or as many as 20 years, to be appointed, even as they should have been so appointed after 10 years.

Gonsalves further said that come January 2021, all persons employed in the Public Service who are paid as temporary workers will be appointed permanently, so long as they have the entry qualifications for the public service.

“This is a complicated but just exercise. It is the right thing to do and it will be done,” he said.

“I am correcting this. Thus, all former nursing assistants, who retired before Oct. 27, 2005 will begin to receive their pension from the Consolidated Fund in accord with an effective date Jan. 1, 2021. The pandemic of COVID-19 has brought this vexing matter to the fore.”

The fourth “announcement” was a restatement of the decision of the government, repeated over the past few months, that persons on Public Assistance (welfare) will receive an increase of EC$25 in their monthly payments, beginning Jan. 1, 2021.

“Those under 65 years, who currently receive $250 monthly, will receive $275 and those 65 years and over will have their Public Assistance rise from $275 to $300 monthly. This is in keeping with our government’s policy to strengthen the social safety net for the poor and the elderly,” the prime minister said.

He also restated his government’s policy that 600 persons who were added to a special COVID list for a $200 monthly payment up to the end of December 2020 will be made permanent on the Public Assistance list from January 2021.

“Our government will continue to protect and uplift the elderly poor,” Gonsalves said.

The prime minister further announced that casual, temporary or part time non-unionised workers across the central government will receive up to a further 25% increase on their wages from Jan. 1, 2021.

“This measure will provide further support to an often forgotten but important group of workers,” Gonsalves said.

He further said that his government has devised a full programme “to assist in protecting and uplifting another important but oft forgotten group — domestic employees in households.

“These employees, mainly women, deserve our full support in every material particular, legal and otherwise. The year 2021 will be proclaimed by my government as the year of the oft forgotten casual and domestic worker.”

At the July 2019 launch of Renewal @40, Gonsalves said he was going to insist that the Ministry of Labour carry out a survey on the condition of domestic workers in SVG.

And, on Tuesday, in the face of a promise by the NDP to reduce immediately from 8.5% to 4.5%, interest on economically disadvantaged student loans, Gonsalves announced that from the academic year 2021 to 2022, interest on new and student loans, including those with interest arrears, will be reduced to 6%.

He said this is in accordance with “the amended sustainable metrics from the National Insurance Services regarding the investment of the NIS funds on this portfolio”.

“This will cost the government in excess of $2 million,” the prime minister said, adding, “This interest waiver, not a moratorium, and a reduction of interest are measures designed to alleviate hardship due to the COVID-19 pandemic.”

He said that the 2020 actuarial review of the NIS is expected to be concluded before the end of the year.

“I am hopeful that the review will recommend an increase of the minimum pension at the NIS which recommendation I will accept,” Gonsalves said of the NIS, which has not increased pensions in years.