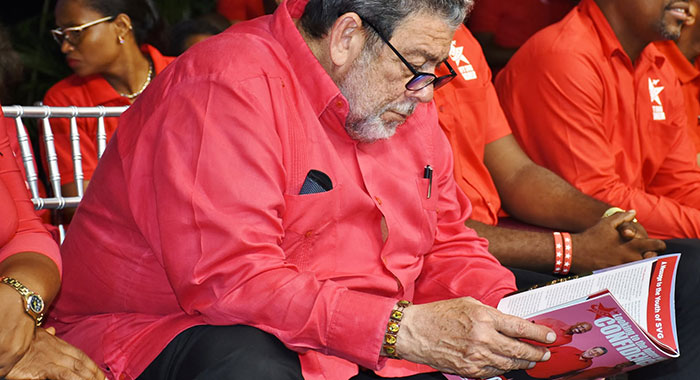 Things have gotten better for residents of the Colonarie Census Division, which is part of the constituency represented by Prime Minister Ralph Gonsalves, seen her, on Tuesday, reading his party’s youth manifesto. (Photo: Lance Neverson/Facebook)

The Colonarie census division — the birth home of Prime Minister Ralph Gonsalves, in 2018 — the most recent year for which data is available — had the fewest people living in poverty in St. Vincent and the Grenadines — 15.4%.

This was a dramatic 24.8-percentage-point fall from a decade earlier, when the poverty headcount — the percentage of the entire population who falls below the poverty line — in that community was 40.2%.

“And we need to understand the need to ask the question why only Colonarie, why not the rest of the country,” opposition spokesperson on health matters, Daniel Cummings told a press conference on Wednesday, where the leaked data was given to the media.

The government collected the data in 2018, and has failed to release it amidst repeated calls during the life of the last Parliament, by Cummings who is seeking a third term as MP for West Kingstown.

Colonarie was not the only census division in the country to see a fall in poverty, however, though the figure in other area was small, to the point of negligible.

But in the neighbouring central leeward census district of Barrouallie, things went very much far south, with poverty more than doubling over the 10-year period.

There was an increase in poverty in the Chateaubelair census division, though not as dramatic as in Barrouallie

And, on the eastern side of the country, the situation was not much different, with poverty in the Georgetown division rising 9.4 percentage points to 65%.

And, even in Kingstown, the nation’s economic heartland and where the lowest levels of poverty exist, poverty had increased by 4 percentage points in the previous decade to reach 19.2% in 2018.

A similar situation existed in the suburbs of Kingstown, where the increase was 5.3 percentage points, standing at 36.6% in 2018.

And, the Southern Grenadines had the smallest percentage of poverty-stricken people, outside of Kingstown – 22.6% in 2018, having increased from 15.6% in 2008, a change of 7 percentage points.

And, in the Northern Grenadines, which had the second lowest percentage of poverty in 2008 — 12%, the figure had more than doubled, rising 13.8 percentage points to 25.8%.

Cummings said that the government halted work on the report in early 2019 because of the unfavourable findings.

The Unity Labour Party government has published the report on and has often boasted about the reduction of poverty between 1998 and 2008, but has remained largely silent on the latest data quoted by the opposition, saying only that poverty fell during its tenure in office, which began in March 2001.

2 replies on “Poverty rises across SVG, but slashed in PM’s home community — report”