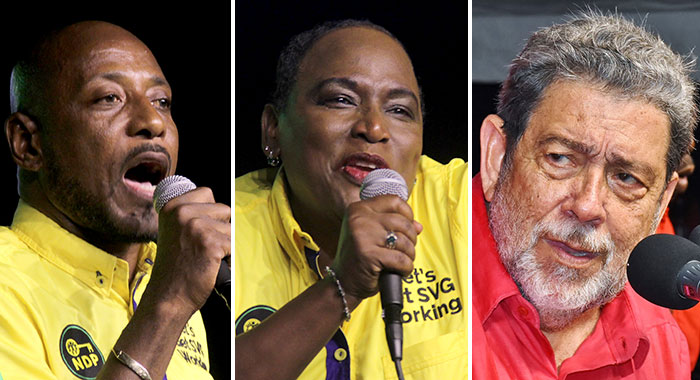 Prime Minister Ralph Gonsalves, on Sunday, laid into some of the main opposition New Democratic Party’s candidates as the campaign for Thursday’s general elections moved into the final days.

“First of all, they say that they get Bramble to be the man to talk for the youth. Bramble introduced heself as a humble youth. Bramble is neither humble nor a youth,” Gonsalves said of the opposition New Democratic Party’s (NDP) candidate for East Kingstown, Dwight Fitzgerald Bramble.

Bramble, an economist, and former teacher, national footballer, and diplomat, is making his first bid to retain the seat, which the NDP has held since 1984.

“If Bramble was involved in a trade, he would have been arrested for mis-description, false representation, because everybody know he nah humble.

“Bramble is 59. Bramble is 59 years old. He just had he birthday and Bramble say he is a humble youth. In the NDP, you have a old youth say he wah talk fuh youth,” said Gonsalves, 74, who is making a bid for a fifth consecutive five-year term as prime minister, at the helm of the Unity Labour Party.

“And they say the other person who talking for youth is Kay Bacchus,” he said, referring to the NDP’s candidate for West St. George, a lawyer who is making her first bid to become an elected MP.

“Kay Bacchus old like Julian [Francis] you know. They’re the same age. They head knocking up 70. Bramble is ah old youth and Kay Bacchus is a mother young gyal,” the prime minister said to laughter.

“Both ah dem ah me friend you know and I ain’t saying nothing bad about them. I’m dealing with youth,” he said at the event that featured the singing of gospel songs.

“But look here, Orando [Brewster] is youth, Luke [Browne] is youth, Sabby [Saboto Caesar] is youth. Carlos [James] is youth. Dem ah youth,” he said, referring to the ULP’s candidate for  Central Leeward, East Kingstown, South Central Windward, and North Leeward, all of whom are in their 30s.

“Gomery younger than Kay, Mini younger than Kay,” he said, referring to Montgomery Daniel, who is seeking a fifth term as MP for North Windward, and Mineva Glasgow, a retired social security expert who is making her first bid at the polls.

“In my case, I am a strong 74-year-old man. Strong. As you see how I move up and down, I ain’t one day younger than 74. But I am like old wine; it cure. It taste sweeter and better,” the prime minister said.