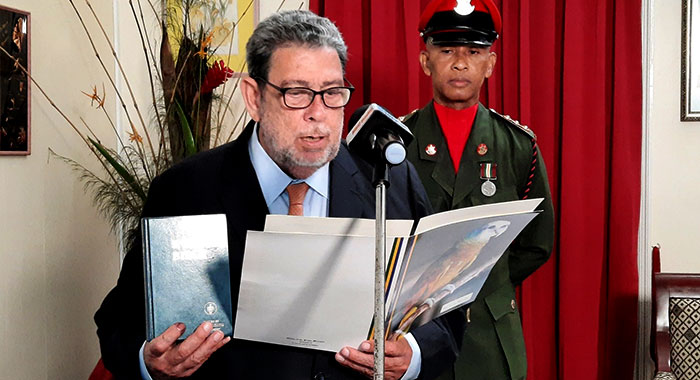 Ralph Gonsalves was on Saturday sworn in to a fifth consecutive five-year term as prime minister. (Photo: Office of the PM, SVG/Facebook)

Ralph Gonsalves, 74, on Saturday, took the respective oaths as he was sworn into office for a historic fifth consecutive term as Prime Minister of St. Vincent and the Grenadines.

The ceremony at Government House, in Kingstown, also saw Montgomery Daniel, the five-term MP for the North Windward, sworn in as the country’s deputy prime minister.

Jaundy Martin, a public servant, took the relevant oaths as attorney general, a post he held in the last government, having filled the vacancy left with the 2017 retirement of Judith Jones-Morgan, who had been attorney general since the ULP came to officer in March 2001.

The ceremony was presided over by Governor General Dame Susan Dougan.

In her comments, the governor general said it was “indeed an honour to present to you our new prime minister and deputy prime minister”.

The head of state congratulated the prime minister for successfully contesting the elections and for creating history by being sworn in for a fifth consecutive term”, a comment that drew thunderous applause inside the colonial building that is her official residence.

“I am sure you are going down in the annals of history in St. Vincent and the Grenadines and throughout the Caribbean,” said Dame Susan, a former cabinet secretary in the Gonsalves government.

“It is going to be challenging and I also urge you to reach out to the NDP because the popular votes have spoken and there is a clear message,” she said.
For the first time since 1998, the main opposition New Democratic Party (NDP) won the popular vote, even as the ULP increased, by one seat, the majority it holds in the 15-member parliament, winning the elections 9 seats to the NDP’s six.

“I see it as important for all of us as citizens to move on. The elections seem to be behind us and we have to start to build our country again,” Dame Susan said.

She thanked the Supervisor of Elections Dora James and her deputy, Sylvester King and their team at the Electoral Office for conducting the election in a way that the nation can be proud of.

In her personal comments to the prime minister and the ULP, the governor general said:

“I notice that the campaign was keenly contested. It was also very competitive and it was also well-organised. It speaks well for our processes at play and to show that we have a mature democracy in St. Vincent and the Grenadines.

“As governor general, I will support all and I urge you, prime minister, to continue the way you have governed with your party in including all. So I hope to see a high level of participation. I also hope to see that inclusive policy and for a platform for communication, collaboration at the community level.

“I would also like to ask you to create a structure for healing in our society because I know that emotions are high at this time and we would like all persons, at the end of the exercise, the elections, we all have to continue to build our nation.”

In his comments, the prime minister said that the country had just gone through “an epic electoral battle.

“Her excellency is correct that the election was very competitive and the results indicate that the country, broadly speaking, is split down the middle, politically, with a half of one percentage point dividing the parties in respect of popular votes.”

The prime minister said that the government needs to make sure that “to the extent that there is a requisite for healing, and there are some bruised sentiments on both sides and feelings, that what is important for us to recognise is that we all belong to St. Vincent and the Grenadines and we are part of this magnificent Caribbean civilisation.

“We are too small a country to sustain prolonged animosities. We have to love our neighbours. We can’t be saying that every day that we go to church and as soon as we come out the church door we start to fight one another on this or that issue, including politics.”

Gonsalves said that as it relates to reconciliation, “as the saying goes, it requires two to tango.

“I have always sought to put my hand out in friendship and to include the opposition at all levels. Of course, there has to be recognition, always, that the reason why we are in government is because we won more seats and, therefore, it would be a cockeyed notion of democracy for anyone to think that by having a government that it must submit its agenda to those whom, when there was an argument, a discussion, different options put to the public and the public, the electorate chose one particular perspective and the perspective which they chose, the overall strategic direction is that offered by the Unity Labour Party and its leadership.”

The prime minister said that having said that, there are many commonalities “and we have to work on those”.