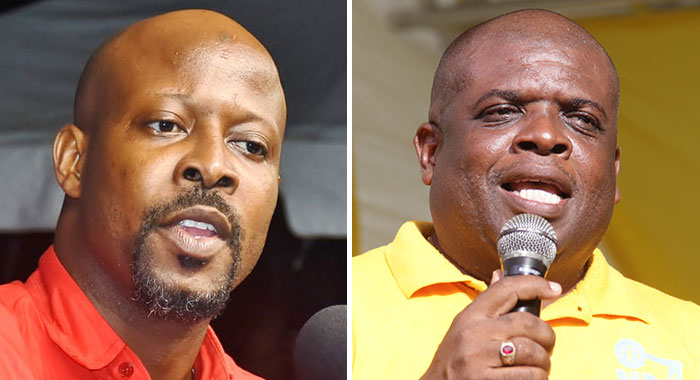 McArthur Gordon, the presiding officer in North Leeward, was up to 7 a.m. Saturday refusing opposition candidate Roland “Patel” Matthews time to decide whether to request a second recount of the ballots, as provided for under the election law.

Matthews, of the New Democratic Party (NDP) was trailing the other contender in the poll, Carlos James of the ruling Unity labour Party (ULP), by one vote after a recount that began Friday morning.

In preliminary results announced after Thursday’s election, James, who was making his second bid to win the seat, was declared the winner by seven votes.

However, the Matthews, who is seeking a third five-year term requested a recount of the ballots.

During the recount, ballots were rejected on both sides, but more ballots that had initially been counted for James.

And when the recount was completed after 5 a.m. Saturday, James was down to a one-vote lead, a source close to the process told iWitness News.

The source said that with the candidates separated by one vote, and the NDP having secured the popular vote nationally, Matthews has requested that Gordon give him reasonable time to decide whether he wants a recount.

iWitness News understands that Matthews’ request was made under House of Assembly Elections Rules 42(6) and 42(7), which speak to the “Final counting of votes”.

(7) No step shall be taken on the completion of the count or any re-count of the votes until the candidates at the completion thereof have been given a reasonable opportunity to exercise the right conferred by this rule.

Sources said that lawyers represented both the ULP and NDP during the recount, which was punctuated by some heated exchanges.

Matthews and his team were still in the polling station keeping an eye on the ballot boxes Saturday morning, even as McArthur was insisting that he wanted to file his election writ, declaring James the winner, sources told iWitness News.

This is the second time in as many elections that there is extremely close result in North Leeward.

In the 2015 vote, Matthews defeated James, then a first-time candidate, by 12 votes to secure a second consecutive term in office.

The preliminary results of Thursday’s election show that the ULP, led by Ralph Gonsalves, was returned to an unprecedented fifth consecutive terms in office — by a 9-6 majority.

North Leeward was among the nine seats listed in the ULP column.

The ULP had been governing by a one-seat majority since 2010, with the same result in the 2015 polls.

However, for the party lost the popular vote for the first time since 1998, with more electors casting ballots for the NDP.

“There are some, now that the elections are over, who may seek, by means largely ignoble, to alter the verdict of the people. I advise with all solemnity that they must put their personal agendas aside, put their hunger and thirst for power, to lay them down, and to accept defeat, in the famous words of Sir Louis Straker, you must take your licks like a man.”

“I warn that those who take the people’s patience for granted are in danger of being gravely mistaken.”

Gonsalves said that people have delivered a verdict through their vote and the nation must get on with the business of forming a new administration.

He said he would, therefore, attend Government House today at the request of the Governor General to be sworn in as prime minister for a fifth term.

Gonsalves said the Cabinet would later be put together, and announced that James, as well as first-term parliamentarians Orando Brewster and Curtis King will be Cabinet members.