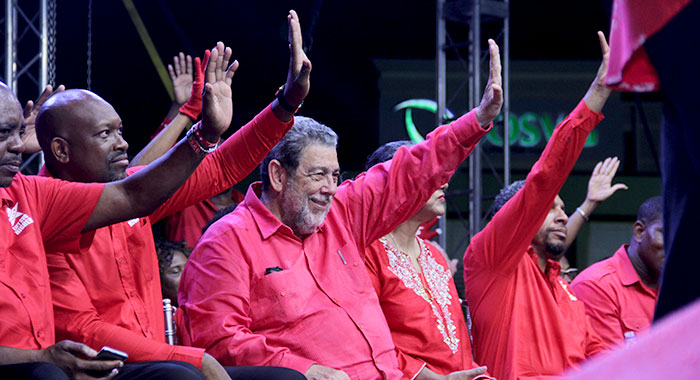 Many years ago, Dr. Ralph Gonsalves boasted that his Unity Labour Party (ULP) has a well-thought-out philosophy and a far more compelling narrative than the New Democratic Party (NDP). In the early days, the ULP campaigned on the slogan “Better By Far”. Notwithstanding their usual pompous campaigns, the ULP has steadily lost support since romping home to a resounding 12-3 victory in 2001.

For instance, in 2001, in my constituency of South Windward, the ULP won by nearly 1,500 votes. That is how the NDP went into opposition — by losing several of their seats by well in excess of 1,000 votes. As early as 2005, the ULP saw a sharp decline in support and lost four seats by 2010. With the Argyle International Airport substantially complete in 2015, a dream long held by every Vincentian, the ULP failed to see any increase in seats. They consoled themselves by focusing on the increase in the popular vote. After all, though the NDP retained their seven seats, they did so marginally. By 12 votes in North Leeward, 149 in East Kingstown and 118 in South Leeward. Not so for the seats retained by the ULP. Their seats were retained with significant increases.

Ralph Gonsalves convinced himself and his followers that the three marginal seats would be gone in 2020. After all, the airport was now complete and for the first time in the history of St. Vincent and the Grenadines, Vincentians could fly direct to Miami, New York and Toronto, with London on the horizon. Reputable hotels are promised, an athletic track substantially complete and the often-touted United Nations Security Council victory that earned him the “world boss” moniker. The list goes on.

One would expect with all this and especially with the ideology that the ULP is better by far and the NDP has no plans and no vision that the ULP would perform exceptionally in 2020, especially in very difficult global circumstances that favour incumbents.

For the first time since 1994, the NDP won the popular vote under the leadership of Dr. Godwin Friday who was leading the party to the polls for the first time. This is very significant, and it needs to be highlighted that the majority of Vincentians who voted in the 2020 elections voted against the Unity Labour Party. I highlight this because the ULP forced early elections in 2001 partly on the premise that they won the popular vote in 1998 and should have be given the mandate to govern — totally disregarding the political system operational in St. Vincent and the Grenadines. In circumstances where the majority of Vincentians have signalled their desire to change the government, should we legitimately expect an early election by the same 1998 token? Left to be seen.

Of note, the national swing toward the NDP featured some interesting results. The ULP has projected Camillo Gonsalves and Saboto Caesar as potential leaders of the party. Both candidates went up against newcomers. In the case of Camillo, a candidate that featured prominently in the 2015 election, he won his seat by a meagre 186 votes, against a woman who is new to politics and entered the political race very late in the campaign.

Newcomer Israel Bruce surely did cut. Saboto’s margin was cut down by more than half. It is interesting to note that this time, Saboto outperformed the shining heir-apparent. With Carlos clutching a seven-vote margin and Luke Browne losing worse than he did in 2015, it will be interesting to see how the ULP leadership tosses up over the next five years. Most observers are confident that Camillo will succeed his father but clearly he is paying the price for not being as circumspect as he should be. Now the picture is a little clearer. Now we know why the ULP did not have the confidence in either gentleman to lead the party to victory in 2020 as Dr. Gonsalves had promised. I credit them with having impeccable foresight.

It is also left to be seen how Luke Browne will recover. A man who has been on the ground for years has lost miserably to another newcomer who returned to SVG less than six months ago. With this new young challenger replacing Mr. Eustace, I know that another political defeat will knockout whatever air remains in Luke’s lungs. Overconfidence will drown you in the sea of reality and as it turns out, Spiderman cannot swim. Not to worry though, a dolphin has been dispatched to rescue Luke.

Let’s shift our attention from drowning Spiderman to Mr. Iron Man. Mr. Iron man retained North Windward by 69 votes. Another newcomer who entered the political race late represented herself well against the representative who has held that seat since 2001. She should be proud of her efforts.

I am also very interested in the political future of Dr. Mineva Glasgow. Dr. Gonsalves declared Jomo Thomas politically dead, tossed him aside in favour of this new candidate who got the knockout of a lifetime. With Dr. Mini’s age and a 500-vote deficit, I’d like Dr. Gonsalves’ opinion on whether mini is dead or alive — politically.

The only ULP candidate who should be popping champagne after last night’s results is Dr. Brewster. This newcomer’s victory may well send Exeter, who has been on the ground for the last five years, into retirement. Brewster surely turned up the heat in Central Leeward.

But what about James? Where is his champagne for being the only candidate to flip a seat? Frankly, for the millions of dollars that the ULP invested in North Leeward in an attempt to win that seat, in addition to the love boxes, foot paths, cement, galvanize, $500 to students, Samsung tablets, opening of incomplete projects, PRYME, well-timed COVID relief packages, ground breakings, road patching and grand promises etc. etc., I expected a more convincing victory. If after such a grand giveaway I could only muster a seven-vote win, I’d probably skip the champagne and join the road cleaning gang more often.

Going into the next election, Carlos must know that he is even more vulnerable than Patel was and his seat will certainly be up for grabs. Any continued shift toward the NDP will see him serving as the North Leeward representative for only one term. And that is my expectation, given the imminent departure of Dr. Gonsalves and Julian Francis — the political animals who have guided the ship since inception. We are about to see what ULP is without the Comrade and I know that he is disappointed with the results. To retire leaving your best men this vulnerable is hardly anything to celebrate. What is sure is that the NDP remains the only party to win an election 15-0 and I suspect with even Ralph Gonsalves losing votes in this election, history will repeat itself.

In discussing the results with a close friend last night, she opined that it is time for Leacock and Cummings to go. I just wish to highlight that both gentlemen are among the best performing candidates in the 2020 election; outperforming Curtis King and Jimmy Prince in terms of their margin. Ralph Gonsalves is the only candidate on ULP’s whole slate to do any better than they did.

It is now for the NDP to show what they are made of. Whether they will allow a feeble ULP to convince them to throw in the towel or if they will muster the courage Ralph had that helped him to survive political losses for over 20 years. As a young Vincentian, I am happy with the election results. Why? Because every ULP candidate must go into the next five years knowing that the rubbish they are accustomed to dishing out to us will no longer be tolerated. The ice is thin. That’s it. That’s the article. Now, somebody should go check on Carlos Williams.

*Jemalie John is a barrister and solicitor practicing in St. Vincent and the Grenadines.