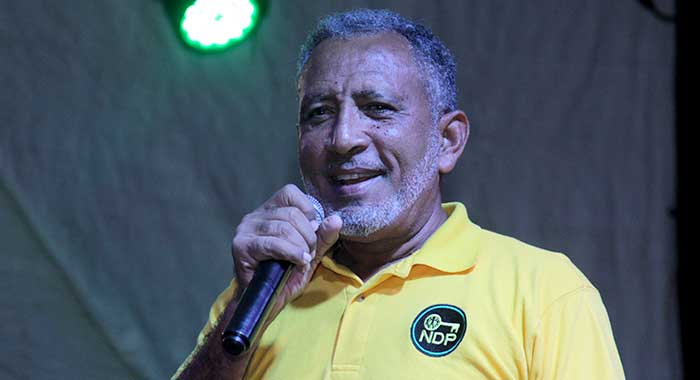 President of the main opposition New Democratic Party (NDP), Godwin Friday, says that his party is disappointed after last Thursday’s electoral defeat, the fifth since 2001, but is not despondent or defeated.

Friday, 61, in his first outing at the polls, led the party to another electoral defeat as the Unity Labour Party (ULP), led by Ralph Gonsalves, 74, was returned for an historic fifth consecutive term in office.

And while the ULP picked up an additional seat, increasing its margin of victory from 8-7 to 9-6, winning North Leeward by a single vote, the NDP, for the first time since 1998, won the popular vote.

In his first spoken national comments since the vote, Friday, on NEW Times, his party’s radio programme on NICE Radio, on Monday, thanked the electorate for making the NDP, “the party of choice of the people in St. Vincent and Grenadines.

“We are now the majority party in this country, the people have chosen the vision of the New Democratic Party. They have come to the party in great numbers,” he said, adding that the NDP increased its vote in all the seats But Central Leeward and North Leeward.

“… even in Ralph’s constituency, in every single polling station, he lost an average of 4% of the vote, almost 4% of the vote, that’s their stronghold,” Friday further noted.

“… at the same time that we are extremely disappointed, because we would expect that the popular vote would result in the change that the people wanted, the people were asking for, the people who came out to their rallies, who listen to our various meetings, said that they wanted.

“And we presented a message, a positive message of growth, and development and change that would make life better for the people. And it came to us, they gravitated towards that, they accepted that vision, and voted for the New Democratic Party bringing us into a majority position for the first time since [1998].”

Friday, who was returned to a fifth consecutive five-year term as MP for the Northern Grenadines, said that the increased votes in the various constituencies  “is a silver lining on what has been a very disappointing general election, I’m sure, for all of our supporters and for the majority of Vincentians, because the majority have essentially voted for us.

“And so we have to take the fight and continue the battle to bring that vision to reality. Because the people voted for change, and we have to keep fighting to bring a change.”

Friday said he wanted to give that assurance to everyone who worked on the NDP’s campaign and helped the party to bring its message to the people, helping them to better understand what the NDP stands for.

“But we are disappointed with the result. But we’re not despondent,” he said, adding that he had heard the determination in the voices of the people who were calling in to the radio show.

“And that is what I expect of the people of this beautiful country of ours. We are resilient and strong people. An adversity is just one more obstacle in the road to be overcome. And we will do that. Because the people now have chosen that they want a new vision for the country.”

He said that the days after the election were difficult for party supporters “because on Thursday night, we fully expected that we will form government because that’s what the majority of the people wanted”.

He said that following that, the party was focused on the final count in North Leeward, where the ULP’s Carlos James’ initial seven-vote victory over the NDP’s Roland “Patel” Matthews, who was seeking a third consecutive term in office, fell to one vote during a recount.

Friday alluded to the poverty assessment data that was leaked to his party ahead of Thursday’s vote, and which the NDP shared with the media.

“In fact, we have a greater poverty now than it was 10 years ago. So it is a time where the people of this country have to take reckoning and say the change we voted for, we want it to come now.

“And we will make a statement about that at some point, soon, as you have alluded to earlier in the programme.”

The opposition leader said he was working to get his voice back after the campaign.

3 replies on “NDP ‘disappointed but not despondent, defeated’ – leader”