Carlos won by 1 vote after Patel was denied 3 — NDP 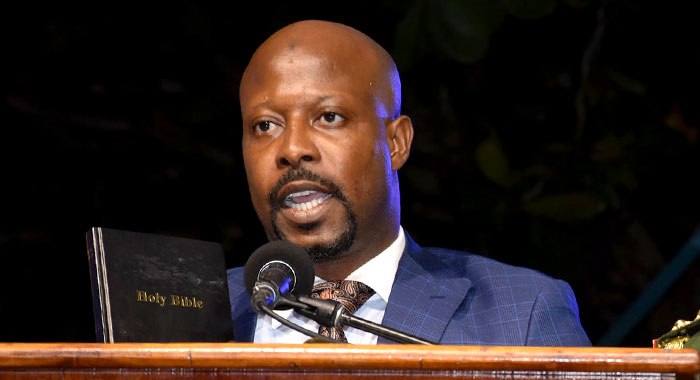 The main opposition New Democratic Party (NDP) is claiming that its candidate for North Leeward, two-term MP Roland “Patel” Matthews lost the seat by one vote after electoral officials refused to count three ballots for him.

The ruling Unity Labour Party’s Carlos James, who lost by 12 votes in 2015 at this first outing at the poll, was on Saturday declared the winner after a 17-hour recount.

Friday said that after the recount in North Leeward, the NDP’s team briefed him.

“And of course, we’re doing consultations to find out what are our options there. And especially with respect to those three ballots that I mentioned to you that had inscriptions on them, that the returning officer apparently ruled could identify the voter.

“And we objected to those and as was appropriate, and felt that they should go our way. But that is his ruling. And so we are at the point where there was only one vote separating Patel from the challenger,” Friday said.

“And so we have consulted and we still have options open with respect to that. But as it is now, that’s the result that is there, but how you pick up a seat, and then you lose the popular vote is quite an anomaly in this country. It is to tell you about how weird politics have become in St. Vincent and the Grenadines,” he said, contrasting the North Leeward result to those nationally.

Last Thursday, Friday led the NDP into general elections for the first time, a poll in which the party suffered its fifth electoral defeat.

He said that the outcome in North Leeward would have been different had the three votes been counted for the NDP candidate.

iWitness News understands that a number of votes in the constituency, for both candidates, were rejected at the final count because they did not have the stamp and or initials of the presiding officer, as the electoral law demands.

Other ballots were rejected because they had numbers written on them, but one, cast for James, which had letters written on it was counted, a source with knowledge of the final count, told iWitness News on Saturday.

Further, another ballot, with the “X” very close to Matthews’ name was rejected, even as lawyers for the NDP argued, citing the law, that the intention of the voter to cast the ballot for Matthews was clear, though the “X” was not in the space provided for the vote, the source said.

Friday thanked the team of lawyers, who represented NDP at the final count, saying:

“They were there all through the night and worked to bring every vote that Patel was entitled to.

“… there were three of them that we thought would go our way that didn’t. And that would have changed the outcome there. But the tally was brought down from seven … on the day of the election to one.”

The opposition leader noted that during the election he had repeatedly said that everyone should come out and vote because each person’s vote could determine the election.

The opposition leader thanked Mathews “for the fight that he put up” and expressed appreciation for the people in NDP stronghold who came out and voted, adding that he also wanted to “extend an arm of embrace to all those peoples in the areas that didn’t vote for us in North Leeward.

“But they must understand that the change that the country has voted for, it won’t come under this present government, because they have been there for 20 years, and they have not delivered a better standard of living for the people.”

Friday told party supporters that the NDP “did fabulously well” at the polls, having increased its vote tally in most constituencies and winning the popular vote for the first time since 1998.

“And I want to tell the people that, okay, we’re disappointed that we didn’t form the government.

‘My dear people, I just want to give you reassurance that we are disappointed but not despondent, not in any way defeated. Because we know now that the people have accepted the vision of the New Democratic Party, the vision presented by myself and my colleagues have accepted me as the moral leader of this country, and politically, constitutionally they’re in office,” Friday said.

On Tuesday, James was sworn in as Minister of Tourism, Civil Aviation, Sustainable Development, and Culture.