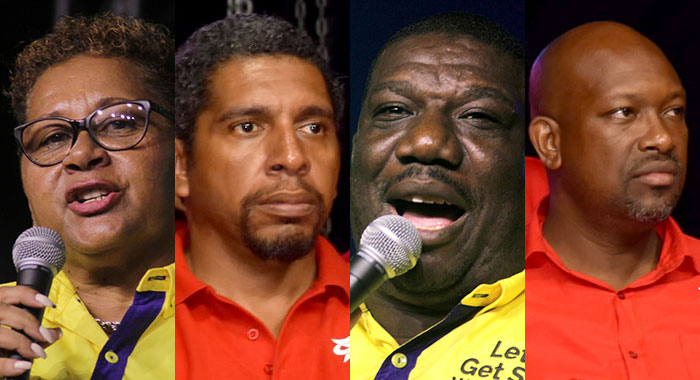 Three newcomers to politics dimmed the light of two of the brightest stars in the Unity Labour Party (ULP) during last Thursday’s general elections, even as party leader Prime Minister Ralph Gonsalves, 74, for a second parliamentary term, says he will transition to a new leader before the next polls.

In the campaign for Thursday’s vote, the ULP’s strategy included positioning the trio of the prime minister, his son and heir-apparent to the premiership, MP for East St. George Camillo Gonsalves, as well as South Central Windward MP, Saboto Caesar as “Strong leadership to continue the transformation”.

And while all three were returned to office as the ULP secured an historic fifth consecutive term in office, all but the prime minister did so with a significantly reduced margin of victory.

Supervisor of Elections Dora James, on Tuesday, told iWitness News on Tuesday that she could “not give a time”, when the finals figures from Thursday’s vote would be available to the media.

However, preliminary figures released on Thursday show that the prime minister’s vote tally fell by an average of 4% in North Central Windward, which he has been representing since 1994.

And, NDP Vice President, St. Clair Leacock, speaking on NICE Radio on Monday, spoke of what he saw as the implication of the electoral outcome for leadership in the ULP.

“It was the intention and probably still is the intention in the dynasty that government will move from the prime minister to his son. Well he doesn’t have a clear mandate to do that,” said Leacock, who was returned, by an increased margin, for a third straight five-year term as MP for Central Kingstown.

Speaking of the younger Gonsalves, Leacock said, “To move him from a 600 lead to under 200 tells you that the people didn’t favour him.”

However, last week, faced with a challenge by the NDP’s Laverne Gibson-Velox, a retired banker, Camillo’s margin of victory fell to 197, according to unofficial figures that iWitness News obtained from a source well-positioned to know the outcome of the final count in that constituency.

Continuing his comments on the younger Gonsalves, Leacock said:

“… his has to be the most embarrassing of the electoral outcomes.”

He said that the election outcome confirms that the NDP and the people of SVG were saying to be true.

“How? Because that is the Minister of Finance; that’s the person who controls the purse strings. And in his constituency, he could not deliver the infrastructural and social or financial services, health, education, whatever it was, that could satisfy the people in his constituency that he did a good job. When you have a person who controls the purse string that cannot defend his territory, it says everything”.

Leacock said that Camillo’s performance at the polls further confirms what the NDP has been telling the people of SVG: that the ULP’s budgetary and financial statements have been “a lie”.

“You look at his constituency and you are embarrassed, with the little things that he was not able to fix and present themselves better to the people of St. Vincent and the Grenadines.

“Whether they would do it now, I am uncertain, because I think they are going to have even less money to look after the people of St. Vincent and the Grenadines. But I’m saying that his performance and the awesome performance of Laverne Velox is a major declaration in the story therein,” Leacock said.

Camillo goes from boastful to thankful

In the election campaign, Camillo said he felt like boasting about what he had done in the district over the past five-years as it relates to public infrastructure and the private sector.

Camillo also presented East St. George as the best constituency in which to live, saying:

But while the MP was blowing his own horn, constituents were taking to social media complain about not seeing or hearing from him.

They had said that he does not respond to their messages on social media or take or return their telephone calls.

The rising star of the ULP, who had distinguished himself as the nation’s UN ambassador and a senator ahead of his election, also seemed to have suffered some reputational damage from the scandal in which a former model, Yugge Farrell, alleged that she had had a sexual relationship with him.

In January 2018, Farrell was arrested and charged for allegedly insulting Camillo’s wife and a magistrate granted an application by a prosecutor, who gave no reasons to support the application, for Farrell to be sent for in-patient psychiatric evaluation.

It was later revealed that Farrell had had mental health challenges, but her case, and the manner in which it was handled generated widespread local and regional attention even as Camillo, then the newly minted finance minister, followed his father ‘s advice to maintain “a dignified silence”.

Camillo’s elevation to the finance ministry in November 2017 was the clearest indication that he had out clipped Caesar, who is his parliamentary and ministerial senior in the race for the premiership and ULP leadership.

Addressing the ULP’s victory rally on Friday, Gonsalves was more thankful and less boastful, telling party supporters, “We don’t boast. We nah boastful. We give thanks for what has happened. Thanks for the blessings.  And gratitude, gratitude is a must.”

He seemed to have gotten the message that voters had sent, saying:

“Today, I can predict the future and tell you this: you have made us better representatives with your verdict yesterday.”

‘we are unstoppable’ — Saboto

Leacock also noted the election outcome in South Central Windward where there was a “remarkable performance” by the NDP’s Israel Bruce.

In 2015, when Caesar was elected to a second term in office, he secured 588 ballots more than the NDP’s Addison “Bash” Thomas, who was making his second attempt to wrest the seat from the ULP’s one-time King Solomon.

However, in 2020, faced with a challenge by the NDP’s Israel Bruce, a senator in the last Parliament and first-time candidate, Caesar held on to the seat by 239 votes and Bruce did not request a recount.

“So it says to the people, those who are being projected as the future of the Unity Labour Party, in terms of the leadership, did not fare well and do not have secure political futures on the base of this election performance.”

He said that Bruce deserves “tremendous recognition for his sterling performance in that constituency”, adding that “another 100 or so support out of Greiggs, some stronger contribution out of Hadley’s Village and so forth to offset the Diamonds [voted for the ULP] could have given us a different result”.

At the victory rally, Caesar was more assertive, saying that the party’s performance at the polls was cause for celebration.

“Tonight is a moment for celebration because the fifth term is sweet. There are some who tried to stop us but we are unstoppable,” he said.

He thanked all of the workers in all the constituencies “where labour was mobilised.

“The ULP has placed a solid foundation and in the fifth term we are going to continue to build on that foundation. That’s how we do it.  So it’s celebration, it’s reflection, but most important, it’s preparation,” he said.

Leacock said that the third person in the ULP’s leadership equation is Montgomery Daniel, who was returned for a fifth term as MP for North Windward.

Daniel, who has since been appointed as deputy prime minister, retained his seat when he defeated the NDP’s Shevern John, a first-time candidate, by 62 votes.

“I say without equivocation and without apology, when a nation has to move from Dr. Gonsalves as prime minister to a deputy leader not known for any sterling, substantial, significant, earth-shaking, earth-moving contribution in Parliament of St. Vincent and the Grenadines, in Gomery Daniel, we are in a bad way, extremely bad way and that he can’t even command a 100-vote margin between the stellar performance of Shevern John, who came in late, tells a story,” Leacock said.