Expecting a ‘pussy cat’, ULP surprised by a ‘tiger’ — Laverne 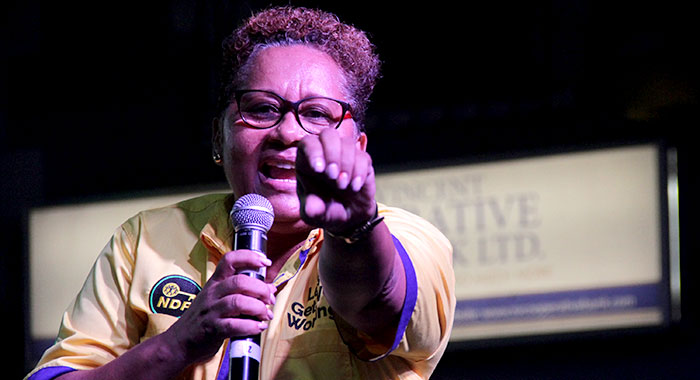 NDP candidate Laverne Gibson-Velox said that the ULP thought she was a pussy cat until they heard her tiger’s roar. (iWN photo)

Gibson-Velox, who was the opposition New Democratic Party’s (NDP) candidate in that district, lost by 196 votes to the ULP’s heir-apparent, Camillo Gonsalves, who was re-elected to a second five-year term.

In 2015, when Gonsalves first won the seat, he left a 607-vote margin between himself and the NDP’s chairman, Linton Lewis, who was making his fourth attempt to win a seat in the St. Georges constituencies.

Speaking on Saturday at the NDP’s “Thank You” rally in Kingstown, Gibson-Velox, who as the first woman to manage a commercial bank in St. Vincent and the Grenadines, said:

The Green Party’s Ivan O’Neal got 26 votes and there were 54 rejected ballots.

Gibson-Velox said that political observers had written her off as not standing a chance against the finance minister.

All the pundits and all the commentators [said], ‘Oh, she can’t do this. He is going to sweep her away and is going to ride roughshod over her.’

“When? How? Not when I have a team of people in East St. George voting for me, working on my team.”

She singled out Colin Graham, an NDP spokesperson, who she said was her campaign manager despite the work he was doing on the national campaign.

“… he kept me sane a lot of the time. Team Velox, what a wonderful team to work with!”

Gibson-Velox said she used to think she was popular until the week of the rally.

“I have never been hugged and kissed so much in my entire life. People I know, people I don’t know; people I hope to know, expected to know, everybody was just coming and I am so grateful for all the outpouring of support…

Gibson-Velox said that the supporters’ presence at the rally was indicative that the NDP is alive and the majority.

In the Nov. 5 vote, the NDP lost the polls to the Unity Labour Party, which won a fifth term by winning nine of the 15 parliamentary seats.

The NDP, however, won the popular vote for the first time since 1998.

3 replies on “Expecting a ‘pussy cat’, ULP surprised by a ‘tiger’ — Laverne”