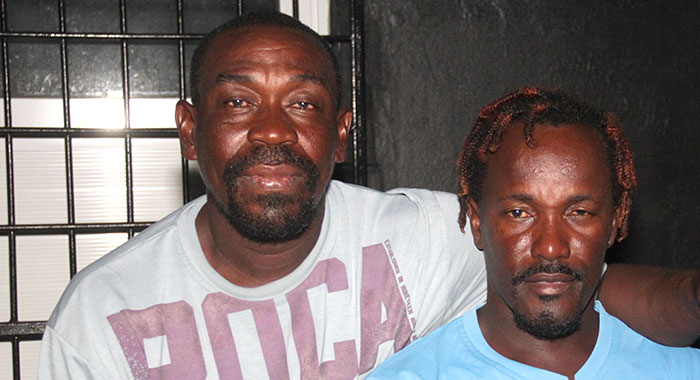 Fishermen Cliff “Fella” Young, let and Canold “Nunks” Miller say Venezuelan pirate robbed them of their money, food, equipment and some of their catch. (iWN photo)

Two Vincentian fishermen are happy to be alive after an encounter with 10 “Venezuelan” pirates, who threatened to kill them or take them to the South American nation and demand a ransom.

“I gave up everything, to be honest. That is the last for my life. I thought I was going to dead,” one of the fishermen, Canold Miller, 38, of Barrouallie, told iWitness News on Saturday.

Miller, along with his captain, Cliff Young, aka “Fella” of Clare Valley, –and who operates from Rose Place, Kingstown –said they had the encounter in Vincentian waters some 65 miles south east of Kingstown.

The men were robbed of their money, GPS, fishing equipment, food and water, and a portion of their catch and were then ordered to sail south or be killed, even as the pirate vessel went east.

Miller, who is also known as “Nunks” said they were aboard their 20-foot pirogue, which is outfitted with a single 75hp outboard engine when the incident occurred between 2 and 3 p.m.

He said a 35-foot vessel, which was outfitted with six 75hp outboard engines, approached them.

The wooden vessel was baby blue in colour, with yellow and red trimmings Miller told iWitness News on Saturday.

Young, the captain of the Vincentian fishing boat said that the pirates’ vessel came upon them and four armed men immediately jumped into the fishing boat.

On seeing this, Young jumped overboard, leaving his crew member behind.

“Fright! I never experienced them things they, so I jump,” Young told iWitness News.

“If you go to sea and see them things dey, wha’ you going do? If the man them get gun point to you, what else you going do than jump overboard?”

Young, who has been fishing for over two decades, said it was his first experience with pirates.

He said that as he swam away, one of the pirates shouted, “Come! King fish will bite you!”

Young said he heard the racking of a gun, and, fearing that the pirates would shoot him, he swam back to his boat.

One of the pirate immediately grabbed him and began patting him down, looking for money and telling him to stop crying.

“I told him we are poor families, we don’t have no money. Then after, it have one in the boat like he done smoke dope. He jump back in the boat and search the two buckets. Then, one ah de Venezuelan tell him come. After he done search me, them leave.”

Meanwhile, Miller who had the longest encounter with the pirates told iWitness News that they were fair in complexion and spoke to each other in Spanish. One the pirates spoke to the Vincentian fishers in English.

The four men who boarded the fishing boat put him to lie face down.

“I was scared for my life. I beg for my life. They come and stop us [at] gunpoint and take everything from we.

“They circle around us. They have six engines. We have one engine, a 75 and you can’t come round them kinda man dey. Cause yo’ go dead,” Miller said.

He said one of them told him, “Money or life!” and asked him if his family had money.

Miller said he had 35 euros and the men took it from him.

“He say, ‘You, we taking you back to Venezuela.’

“I beg them for my life because I had no choice because my next friend start to swim,” he said, referring to the captain, who had jumped overboard.

“I had nothing I could do again. He jump over and start to swim. Leave me alone. Fright! The man swimming for his life,” Miller further said of the captain.

He told iWitness News that in addition to the euro, he had  EC$454 in his possession and the pirates took it from him.

He said that the pirates commented that the EC was St. Vincent money and that the euros were in exchange for his life.

“They tell me they going carry me back Venezuela for ransom from my life,” Miller said.

The men took his GPS, his cellular phones, as well as their emergency supply of food and water.

“Everything I had on board. Everything dem tek –the fishing equipment, the bait and stuff like that.

“I plea for my life…  and they tell me go south, if I go to land they will kill us. So we run south then run back home and go straight to the Coast Guard base.”

He said that the officers at the Coast Guard base recorded a statement of what had happened.

“It’s very hard because fisherman right now, you as a fisherman and you get your family, leave your home like say 5 or 4 o’clock in the morning to go and fishing and you might never get back home.

“Think about how much fisherman go out and never come back home because of the pirates out there; they’re killing us. I thank them for my life, but to be honest, I will like to get my stuff they tek from me.

“What about them fisherman who missing and gone? Dem never get back home. We went to the Coast Guard base; what the Coast Guard did for us? Just a statement and that is it.

“The Coast Guard not doing enough patrols for us as fishermen. And we life at risk because when you get a boat that get six engines in our waters, what you think they doing? Think about we as fishermen with one 75 horse power – [which costs] $17,000 and change. You see a man with six engines. What you can do to them dey? Nothing. Think about it.

“Ah wah back me GPS and me phone and me money,” Miller told iWitness News.