Chateaubelair and North Leeward have been neglected 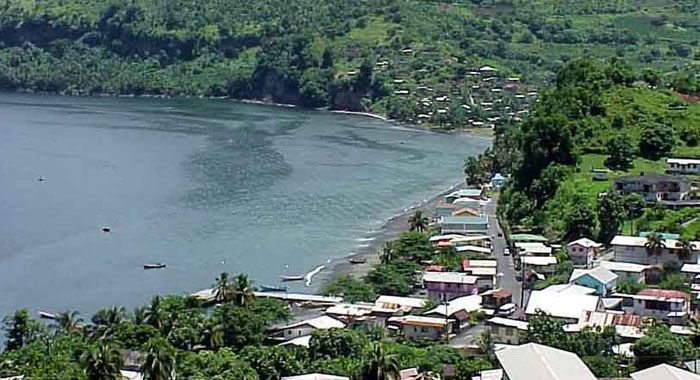 The North Leeward town of Chateaubelair.

The town of Chateaubelair lost its township decades ago. Under the rule of the Unity Labour Party (ULP), which has been in office since March 2001, Chateaubelair has gotten from bad to worse.

Persons might even be upset with me for inferring that the ruinous times were as far back as the times of New Democratic Party (NDP) rule, which is not so. At such times we had a fully functional branch of the state-owned, National Commercial Bank (NCB). Our fishing industry was so viable that we habitually supplied the locals, Kingstown fish market, and the numerous boats that bought fish for our northern neigbours. These boats were affectionately called “French Boat”. Agriculture was prosperous as we were able to flood the local depots with fresh produce weekly. Yes, that was Chateaubelair and by extension North Leeward long before ULP. Now, this is Chateaubelair: on either side of the main street, there is a sore eye relic of abandoned and dilapidated buildings. Even some which house persons are sights to behold.

The ULP has failed to maintain Chateaubelair as a town and has allowed it to not just erode itself but to shatter the self-esteem of the people it houses. You can simply say many of these people look and carry themselves just as the town looks. You ought to come and spend one day and prove for yourself. This negligence is an epedemic, as it has affected all the neighbouring communities comprising North Leeward. No village has risen above Chateaubelair despite the feeble attempts to insert minuscule ad hoc infrastructure to buy and secure votes from an electorate that seems to distance from the real issues. There is a great deal of huffing and puffing but maybe for the first time, the toll of negligence could be seen as a true indicator of the mass regression not just of communal infrastructure but of a people. Chateaubelair is a ghost town! I challenge anyone to refute this statement. There is but one major daily economic activity in the town of Chateaubelair, and that is the sales of the National Lottery game tickets.

Our people have proven they are industrious and are not afraid of hard work, hence, the degeneration of our social and economic conditions must not be thrown at us as, “You are lazy or we lack the ability to excel”. This is a lie and needs to be called out. The truth is we are being poisoned from the youths upwards by a watered-down education and political tribalism as we have never seen before. I am of the opinion that the prime  hinderance to  holistic development as a nation is our politics.

Notwithstanding these deplorable conditions, the government has failed to directly provide employment or stimulate economic growth which would provide jobs for most of the employable. But rather, the government sees it fit to take hard-earned taxpayers’ money to foot the rental cost of a dwelling house in Spring Village to house the police officers for more than a decade. The cost of which could have repaired and refurbished the police station which is also a victim of negligence. This can only be defined as prudence. It must be seen as great governance. And for this, we must applaud the ULP government.  Clap them.

Consequently, North Leeward has only been given some attention as the hands of nature have joined forces in trying to remind the people of North Leeward how vulnerable and neglected, we are. To this accord, significant parts of our roadways and other infrastructure have suffered minor to major damage. Some have cost us lives. Some have received minor attention while others are yet to be touched. To date, the bridge at Sharpes and the pier at Chateaubelair are under reconstruction. There is also work being done to upgrade the road that diverts from the treacherous terrains of Couls Hill and Troumaca. Even the construction of the pier and bridge was delayed for years, with no regard for the inconvenience, these two projects have caused us. The government could not have cared less about us. Like a father running to the rescue of one of his children only because he fell ill, injured, or landed himself into trouble, so is our government.

Conversely, for those who inherited Labour from their parents and grandparents, I leave you to adjust to the reality of the extent of the negligence of North Leeward under a government with which you associate the word love. I could almost feel the resentment with which some of you will treat this relatively short piece and understandably the writer. It does not surprise me as I have been long convinced that such behaviour is a by-product of the so-called education revolution, which merely gave more access to secondary and tertiary schooling but has failed to truly educate our people. We have failed to examine and discuss the issues and have only been able to attack those who raised them. If this behaviour defines the educated then I refuse to be called such. Yes, and I know you are so ready to say that the government cannot provide jobs for everyone and it is the people who must lift themselves. While I could agree with you, I have a question for you: What is the role of government? I hope I do not answer it for you but it is the government that must create an economically conducive climate that would encourage entrepreneurship and locate markets for the goods if not services produced by the people. It must also design and implement policies that would not only encourage foreign investors but ensure our people benefit from any such investment.

Nevertheless, whether you are bent on excusing your government of 20 years for being unable to stimulate our economy to cause meaningful growth or not, they have a critical role to play. They should be held responsible and accountable for it. Realistically, instead of real economic progress, desolation and destitution have become cash crops for some of these politicians, as they exploit the human market for their own selfish gains. Hunger, begging and prostitution are at their all-time high as men and women, boys and girls fall victim to a degenerated society under the watchful eyes of a ULP government. Jobs are not only a scarcity but a luxury, as farmers still mourn their losses from the recent drought and others are discouraged from engaging. These are the realities that face the people of North Leeward. I can go on but I would conclude here.

Without a shadow of a doubt, we are a resilient people but we are fed a diet that only seeks to divide us. My people, it is time we examine ourselves as a people and understand the role of government because it should not be one of favour but one of duty. The government should fear the people and not the other way around. I leave you with this quote: “A people that elect corrupt politicians, imposters, thieves, and traitors are not victims, but accomplices”.

One reply on “Chateaubelair and North Leeward have been neglected”