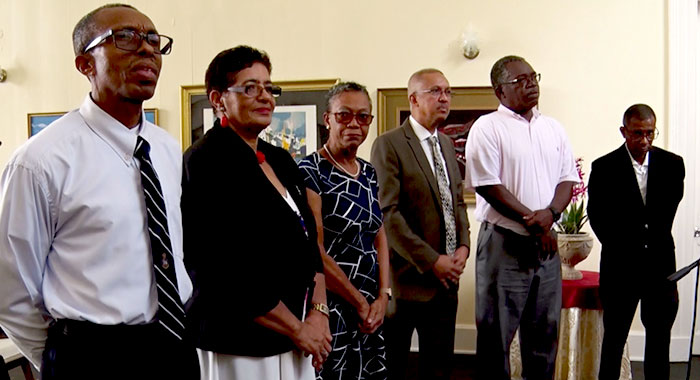 The Public Service Commission (PSC), the organisational body that governs the Public Service of St. Vincent and the Grenadines now has a new chairman in the person of lawyer Stephen Williams, who replaces outgoing chair, Cecil “Blazer” Williams, a lawyer, who was chair for 19 year.

Stephen Williams was sworn on Friday at Government House, along with the five other new members of the commission.

Speaking at the swearing-in ceremony, Governor General Dame Susan Dougan acknowledged the contribution of the former the outgoing chairman and expressed gratitude for his service, along with the other members of his commission for exhibiting “a high standard of professionalism, always resourceful, reliable, committed and served faithfully and well”.

The governor general reiterated her confidence in the appointed members saying that they will serve their country well.

Dame Susan further stated that all members are “poised to provide exemplary service”.

She mentioned the importance of a succession planning component, noting that it should be taken very seriously.

The first female head of state, added that it is crucial that it is firmly implemented because the analysis shows that it is indicative of what we know, need and what is required in the future; and it is paramount in any ministry as it involves personnel and human resources.

In her closing remarks, the Governor General congratulated the newly appointed board members and emphasised her faith in their abilities to make informed and good decisions.

According to the Public Service Commission Department, its objective is to implement and enforce the various civil service orders, public service regulations and statutes governing the management of the Public Service.

The last day of the 2018-2020 term of the Commission under chairman Cecil “Blazer” Williams was last week Tuesday, Nov. 17.

2 replies on “New Public Service Commission board sworn in”