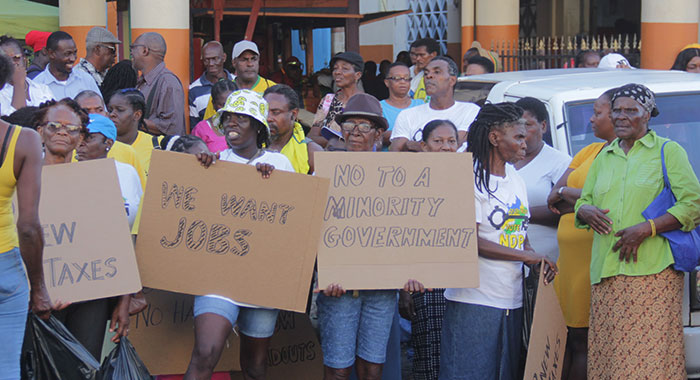 Opposition supporters on the picket line outside Parliament on Monday. (iWN photo)

The opposition New Democratic Party (NDP) says its lawmakers will support the government on matters that are “transparently” in the interest of the country.

On Monday, as the 11th Parliament convened for the first time, NDP President and Opposition Leader Godwin Friday told iWitness News of the party’s approach to this parliamentary term, its fifth in opposition.

“We are going to work on their behalf to bring to fruition as soon as possible the programme and the plans that they have embraced by supporting us as the majority party,” said Friday, who led the NDP in the Nov. 5 general elections, his first as party leader.

“That has to be our first and foremost priority and we have an obligation to seek to bring that into reality as soon as possible and you will find us very determined and vigorous in pursuing that agenda and the programmes that we have outlined, articulated in our campaign and prior to that and that we continue to hold as the way forward for the people of this country.”

While the Unity Labour Party won the election after taking nine of the 15 parliamentary seats, it won the popular vote for the first time since 1998.

Asked about the party’s overall approach to this parliamentary term, Friday said:

“In general terms, my plan is always to work on behalf of the people. There will be times when things are transparently within the interest of the country that we will support whether it comes from government or we initiate them because remember, we are the party that the people have chosen  … in the popular vote.

“So a lot of what we have put forward will have to be part of the public policy debate and implementation going forward.  And so, that is the approach that we are going to take.

“It’s to push to get the agenda to include those important issues that we raised that the people have embraced and when the government is willing to work on those issues. Of course, we will push to have them implemented.”

Asked if the majority vote is of any consequence in the Vincentian system of democracy, where the first-past-the-post principle determines the winner of the elections, Friday said, “…very much so.

“If you win by one vote in North Leeward, you get the seat so it’s a majority. In our system, a principle of democracy is that the majority forms the government. Sometimes in our system, the first-past-the-post system, that doesn’t happen. I don’t think that is the way it was intended to work. When it doesn’t happen, you should fix it. That is what we intend to do.”