Woman was ‘too scared’ to contact police, but went to buy phone for fugitive 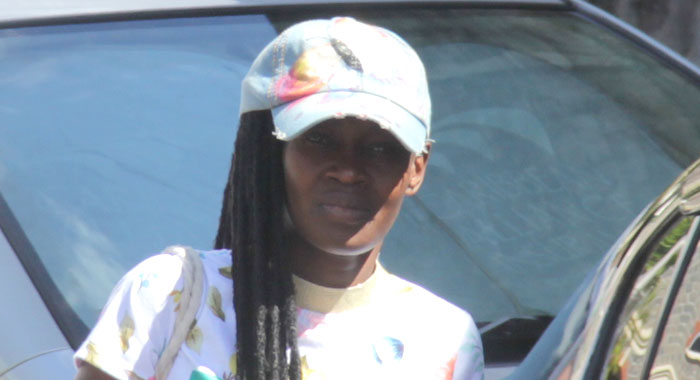 Shadene Farrell on her way to prison on Friday. (iWN photo)

Shadene Farrell pleaded guilty at the Kingstown Magistrate’s Court to a charge that between Dec. 9 and 10, at Lowmans Hill, knowing Primus and Hanson to be guilty of escaping lawful custody, did without lawful authority or reasonable excuse, an act to impede their apprehension or prosecution.

Farrell, who is also known as “Baige”, was arrested on Thursday at a rented apartment in a house in the Plan area of Lowmans Hill, where police apprehended the two escapees, having shot Hanson in the process.

The facts of the case, as presented by prosecutor Police Sergeant Renrick Cato, are that police were investigating the escape from Her Majesty’s Prisons, in Kingstown, when, acting on information, members of various units went to Farrell’s home in Lowmans Hill.

Farrell was not at home at the time but both Primus and Hanson were met there and were apprehended.

The defendant later arrived at the house, where police questioned her and she informed the officers that she lived there.

Farrell was arrested on suspicion of assisting the escapees.

The defendant was handed over to detective Corporal Nikisha Layne of the Criminal Investigations Department.

Police later took Farrell to an abandoned concrete building in Lowmans Hill, where she handed over to them a multi-coloured Digicel bag containing a cellular phone and SIM card, which she said she had purchased Thursday morning for Primus.

The woman, who has no previous conviction, told the court that she is self-employed, making jello shots — gelatine mixed with alcohol.

The mother of two children of ages 9 and 6 both of whom live overseas, said she began selling the products in July this year, and before then, she was in Antigua, where she lives most of the time.

Farrell said that the coronavirus pandemic (COVID-19) has detained her in St. Vincent.

The woman told the court that the two fugitives came to her house around 5 a.m. on Wednesday and knocked.

She said she knew Primus from before but told the two escapees that they could not stay at the house and asked them if they had somewhere else to go.

Farrell said that Hanson said yes, but they added that they sun was coming up.

She said that the men stayed at the house all day Wednesday and also the whole night and while she was there with them, she was at the window “all the time”.

Farrell told the court that she knew that the men had escaped lawful custody but she did not have a phone.

She said that she and her best friend, another woman, live at the apartment, but her friend was not at home at the time and she (Farrell) did not have a phone on which to contact the police.

Farrell said that she and Primus used to communicate via video call when he was in prison, and while she did not think doing this was proper, she was just keeping him company, “trying to help him to pass time”.

The senior magistrate asked the woman if she knew the penalty for her actions and she said no.

The magistrate asked the prosecutor to tell her, and Cato said that it was a maximum of two years in jail.

Farrell told the court that she while Primus and Hanson were at the house, she tried to give a male neighbour who had come to the house a sign that the two escapees were there.

She, however, admitted that she did not inform police of their presence there when she went into Kingstown Thursday morning to purchase a phone for Primus.

It is the second time that Primus is escaping from Her Majesty’s Prison in Kingstown.

His escape this week comes even as he is serving a 16-month sentence for escaping the same prison between Sept. 30 and Oct. 1 last year.

Primus has been in custody since April 2016, charged with the November 2015 murder of 33-year-old real estate agent Sharlene Greaves.

Greaves’ body, which was riddled with stab wounds, was found at her Arnos Vale office on Nov. 13, 2015 and police cracked the case while investigating Primus’ alleged abduction of Mewanah Hadaway, then 24.

He is alleged to have kept Hadaway against her will at a house in Vermont, and was charged with committing sex crimes against her during that time.

However, those charges were dropped at a preliminary inquiry because Hadaway, who had migrated, was not available to testify.

Meanwhile, Hanson is awaiting trial on an unrelated murder charge.

Hanson, as well as his co-accused, Glenville Harry, of Vermont, and Jerome Ollivierre, of Mayreau, are alleged to have murdered Rodney George, a 50-year-old security guard, of Victoria Village.

George’s body was found with its throat slit on Sept. 1, 2018 in Arnos Vale and police placed his death as having occurred sometime between Aug. 31, and Sept. 1.

In May, Hanson was sentenced to six months in prison for inducing into Her Majesty’s Prison one black Alcatel cellular phone and charger, both of which are prohibited articles.

One reply on “Jail for woman who housed escaped prisoners”