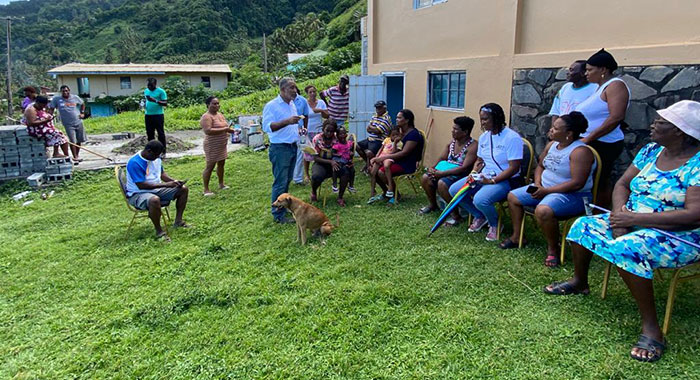 Leader of the Opposition Godwin Friday, on Wednesday, led a team from his New Democratic Party (NDP) on a visit to North Windward, a constituency in the red zone of the La Soufriere volcano.

Further, on Monday, the opposition met with the National Emergency Management Organisation (NEMO) for a briefing on the on-going situation.


The opposition team which included party vice-president and Central Kingstown MP, St. Clair Leacock, and NDP 2020 election candidate for North Windward, Senator Shevern John, visited the district one day after officials announced that the volcano was undergoing an effusive eruption, in which magma was oozing into the crater.

As a member of the SVG Cadet Force, Leacock helped to coordinate the evacuation of some 20,000 persons during the 1979 explosive eruption of La Soufriere.

“I am not a scientist. I listen to what the authorities say but I do think that my role, my position as a major political leader, as somebody that a majority of the people in this country trust, that it was my obligation, my duty,” the opposition leader said of the visit.

Speaking Monday, on NEW Times, the NDP’s weekday show on NICE Radio, Friday said he was in Bequia — where he lives — when the eruption was announced.

“… when I heard about the activities taking place there the day before, overnight, I got very concerned and I thought well if I am anxious and concerned about it, imagine how the people in those areas, in the red zone, so-called, from Georgetown up, would feel.

“And so I wanted to go and to give assurance that we are there with them, to encourage them to take very seriously the warnings and the alerts and the information coming from NEMO and other responsible authorities, to be careful of the hysteria that sometimes builds up in social media but to listen to the official sources, and to assure them that their welfare and their safety would be looked after and certainly that I will make sure that we push to get the resources that are necessary to move them if that becomes the case.”

He said that many people expressed their gratitude for that.

“They also were very concerned about the situation,” he said of the residents with whom the opposition team interacted.

“The thing that came through is that most of the people we spoke with were nervous, they were worried, some said they hadn’t slept the night before, and I could understand that but the idea really was to give them the assurance that their concerns are my concerns as well and that we would do all that we can to move the authorities to provide all the assistance necessary.”

The opposition leader also said that party officials met with Director of NEMO, Michelle Forbes and her team on Monday.

During the meeting Forbes made a presentation about the state of the volcano and the preparations that are in place to respond if the situation gets worse.

She also explained NEMO’s thinking as to how we respond and how they regard the heightened activity that is taking place at the volcano.

“It is something that we all have to take seriously,” he said, noting that La Soufriere is a very active volcano.

He said that persons who experienced the 1971 effusive eruption and the explosive eruption of 1979 “understand the kind of disruption that is required when there is imminent threat of an eruption and nobody wants it to happen.

The opposition leader, however, noted that this is something that the scientists will comment on, noting that among the experts who had flown in from Trinidad is his Grammar School classmate, Vincentian geologist Professor Richard Robertson, who is originally from Rose Hall.

Friday said that in Monday’s meeting, opposition members were also told that the persons responsible for coordinating any kind of movement, providing resources to people on the ground, and transportation, if necessary, are doing preparatory work to ensure that they can respond at short notice.

“We have an active volcano and we have to ensure that we treat it with the respect that it requires and that we avoid, if there is any violent eruption, an explosive eruption as they call it technically, that we avoid any loss of life,” the opposition leader said.