Opposition warns against complacency as pandemic drags on

12 local cases detected in SVG in a week 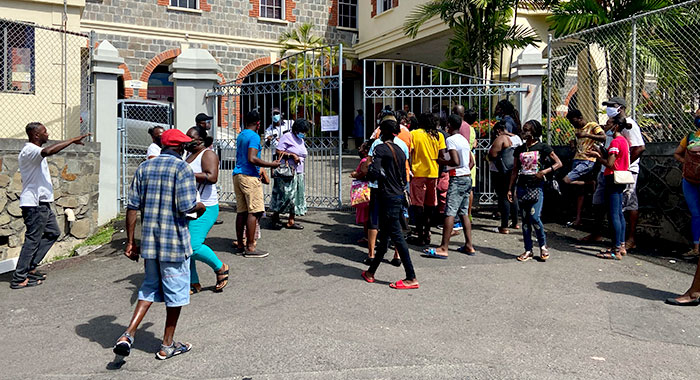 There was an observable increase in the number of masks being worn in Kingstown on Monday, including among these persons waiting to access services at VINLEC. (iWN photo)

Opposition Leader Godwin Friday is urging Vincentians to continue to take steps to curb the spread of COVID-19 and has cautioned against fatigue, complacency and self-congratulation in the face of the pandemic.

“It is unfortunate that you are starting the New Year hoping that the news will get better but it is getting worse,” he said, on Monday, on New Times, his New Democratic Party’s (NDP) radio programme on NICE Radio.

“And of course, you have the government, same ole, same ole, which is part of the problem as well, in terms of how they reach out to people and coordinate and get resources to people.”

Friday was speaking as the reopening of school was postponed for one week amidst a local cluster of COVID-19 cases detected last week.

Authorities announced last week the detection of six cases, the source of which they were trying to determine.

Further, on Sunday, another case was announced and the patient also had no recent travel history, but NEMO did not say whether the case was related to the six detected last week.

On Monday, a further five local cases were detected, one of them from the Dec. 28 cluster, while the others are still under investigation.

There are 33 active COVID-19 cases in the country, and no deaths have been recorded as a result of the viral illness.

The pandemic seems to be taking a turn for the worse at a time when the La Soufriere volcano is undergoing an effusive eruption — oozing lava into the crater.

Friday said it seems to him that the country is bracing itself for heightened alert relating to both the volcano and COVID-19.

“You hear the prime minister talking in the Parliament the other day almost as if this thing was over … — how they managed it so good. I don’t know what it was intended to point out.”

The opposition leader reiterated that the nation is still in the midst of the pandemic, noting that people are dying in record numbers in other countries and that Grenada has recorded its first COVID death.

“This is not an improving situation. It seems it is getting worse before it gets better and so we have to continue to spread the message that we have to be safe and we have to take the precautions that are necessary to protect ourselves.”

Friday said he recently declined to shake a friend’s hand and the person asked if he thought that they had COVID-19.

“I said, ‘Well, I don’t know that you do, but you should think that I have because I am trying to protect you as well.’

“And so we have to regard this situation as so serious that, in a sense, to protect one another that we regard each other as a potential carrier. And that is the safest way to do it.”

He said this is not an insult or trying to be standoffish. “It’s just that you are trying to protect that person and yourself and to prevent this from becoming something that takes lives in our country. We don’t want that to happen.”

Friday said he was very concerned about the development last week, adding that the nation has not heard from the authorities the description of the situation in which persons who have not travelled have tested positive for COVID-19.

“That is how they have presented it to the media. Well, what is that called? If you haven’t travelled and you have contracted COVID, you test positive for the coronavirus, then you have to have gotten it from somewhere within the country,” Friday said.

NEMO has used the term “local spread” to define the cases among persons with no recent travel history and, on Monday, the Ministry of Health announced a press conference for the following day.

‘a matter of life and death’

Friday said that the nation is confronting a serious problem.

“… and it is not a matter that can be trifled with or to be concealed or to be in any way downplayed,” he said.

He added that it is “a matter of life and death and we have to be very, very honest with the public so that they can take necessary steps to protect themselves so that there is no doubt in anybody’s mind, no equivocation, as to the seriousness of the threat that some may and some may not take the necessary precaution.”

He urged the public to follow the latest advice given regarding the wearing of masks.

He said that schools would not have remained closed “unless there is a serious problem that is affecting our community.

“Everybody feels a certain fatigue and so forth with this thing because we have been fighting it for long and taking precautions but those precautions have worked and so that we are kept safe.

He urged Vincentians not to get tired of the precautions.

“And we will eventually overcome, but it takes us all to do it, it requires us to have the proper information from the chief medical officer, from NEMO, from the government, broadly speaking, so that we know what the situation is, the level of risk involved, the seriousness with which we must take it an protect ourselves, protect our neighbours, protect our friends.”

He said that the recent development regarding the pandemic locally is unfortunate.

“… but it just shows that you can’t become complacent or smug or start to self-congratulate before this thing is completely licked. And anybody who does that is, quite frankly, a fool, because this is a very, very serious matter and we have to make sure that we take the necessary precautions.”

The opposition leader said that panic is never a proper response “but we need to be responsible”, including observing hand-washing protocols, physical distancing and the wearing of face masks.

“And to do them because we have been fighting this now for almost a year and there is some light at the end of the tunnel so let us make sure that we keep moving forward and get to the very end of it,” he said, adding that the economic disruption is and will be severe.

2 replies on “Opposition warns against complacency as pandemic drags on”