Vincy wanted in US gets bail in St. Vincent 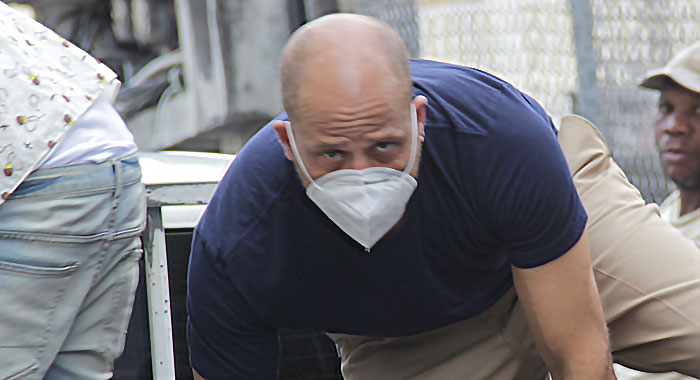 The Vincentian man who is on the most wanted list in the US state of Pennsylvania was granted bail in St. Vincent and the Grenadines (SVG) on Monday.

Chief Magistrate Rechanne Browne, sitting at the Serious Offences Court, granted Kern Z. Mayers bail in the sum of EC$40,000 with one surety.

She further ordered him to surrender his travel documents, and to report to the Questelles Police Station on Mondays between 6 a.m. and 6 p.m. until the outcome of his extradition hearing, set for April 4, 2021.

Browne also ordered that stop notices be placed at ports of entry and exit, preventing Mayers from leaving the jurisdiction.

The chief magistrate granted bail after hearing an objection from Senior Prosecutor Adolphus Delplesche, who represented the Crown in the matter.

Counter arguments came from Joseph Delves, who, along with Grant Connell, represents Mayers.

According to the website Pennsylvania Crime Stoppers, the Pennsylvania State Police, Fugitive Apprehension Unit continues their search for Mayers, one of the ten most wanted in the state.

The website says Mayers is wanted for an incident on Jan. 4, 2006, at the Home Depot and Burlington Coat Factory.

“Law enforcement attempted to initiate a traffic stop on a vehicle driven by Kern Mayers.  In an attempt to flee from the police, Kern Mayers struck several vehicles and injured police officers.  After a vehicle and foot pursuit, Kern Mayers was captured.  Kern Mayers was released from the Luzerne County Correctional Facility and then failed to attend his scheduled court hearing on January 25, 2006,” the website said.

It said that Mayers is also known as “Yellow” and “Cuz” and his last known address was in Brooklyn, New York.

He is wanted for aggravated assault, fleeing or attempting to elude police officers, recklessly endangering another person, institutional vandalism, and accidents involving damage to attended vehicles.

Mayers, who currently resides in Campden Park, had been in custody in Kingstown since Dec. 10, 2020, when he was arrested.

He is said to have returned to St. Vincent a few years ago, and was working at a Kingstown business when he was arrested in December.

In objecting to Mayers’ bail, Delplesche told the court that the prosecution’s concern was that Mayers was on bail in another jurisdiction when he skipped that bail and came to St. Vincent and the Grenadines.

He said that the prosecution was concerned that a similar thing could happen.

The senior prosecutor said that one could ask that conditions be put in place to prevent such an occurrence.

“We know that in these islands you walk from Union Island to Grenada,” he, however, said.

Union Island is one of the southernmost islands in the Vincentian archipelago and there has been, traditionally, free flow between that island and Grenada, SVG’s southern tri-island neighbour.

“Our borders are open and so are our shores. That is the concern we have,” Delplesche said.

But Delves resisted the application, saying that conditions can be imposed to ensure that Mayers appears in court.

He said that Delplesche did not say that the matter concerns an alleged offence 15 years ago.

The lawyer said that is a “huge consideration” in the proceedings, adding that given the circumstances, the nature of the application and when Mayers returned to SVG, he should be granted bail.

Delves said that the procedures before the court stem from a charge relating to 1.27 grammes of cocaine, adding that the drug was submitted for testing on June 19, 2019.

The lawyer said that there is an offence that began with 1.27 grammes of crack cocaine charge.

He said that these facts could affect how the court views the proceedings.

“Why is it that after 15 years the United States of America is seeking to extradite this gentleman? Delves asked.

“What has happened to that 1.27 grammes of cocaine between 2006 and 2019,” he said, adding that this is a serious concern that his legal team has.

The lawyer argued that given that Mayers is Vincentian and in St. Vincent, he obviously has ties to the country.

He said Mayers would not skip bail in his home country and disappoint his relatives.

He said that the lawyer who filed the extradition application had argued that the statute of limitation on the offences that Mayers is alleged to have committed in the United States did not kick in because the legal documents were filed immediately.

Delves, however, said the current complaint is a fresh complaint, filed in 2017.

He said that given that the court had given bail in a case in which Vincentians Anlee Parsons and Hyah Browne were wanted in Grenada, the court could also impose conditions on Mayers.

Delves said that the court can grants bail for all types of offences, including, after nine months, murder.

“A lot of people forget that,” he said.

In handing down her ruling, Browne said that the court has to consider when the United States could be ready to deal with the matter, given its own issues currently.

She said that in the circumstances she would grant bail.

7 replies on “Vincy wanted in US gets bail in St. Vincent”