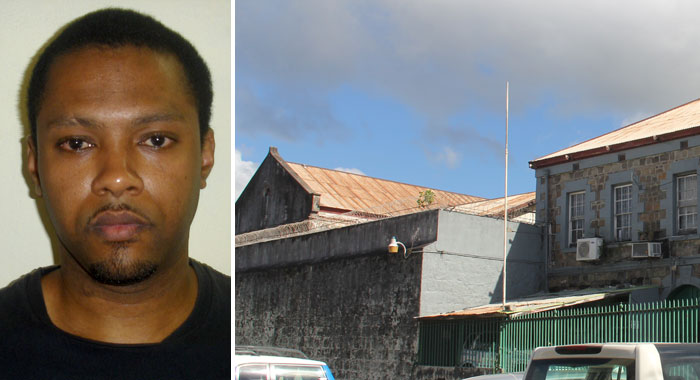 Accused murderer Veron Primus and Her Majesty’s Prison in Kingstown, from which he escaped in 2019 and again in 2020.

Veron Primus’ first escape from Her Majesty’s Prison, in Kingstown, in 2019 was more like a walking tour rather than a mad sprint for freedom.

Video footage recorded at the prison shows Primus exiting and re-entering his cell, then walking around various sections of the prison before finally leaving the compound some two hours later.

What’s more, while Primus pleaded guilty to and was jailed for a charge that he escaped the prison between Sept. 30 and Oct. 1, 2019, the date on the prison’s surveillance footage of the escape is the year 2000.

These were some of the facts that came to light last week as the trial continued at the Serious Offences Court of Louis Cupid, charged with corruption and conspiracy charges in connection with the escape.

Cupid, 45, of Murray’s Village, has been suspended from duty pending the outcome of the trial.

Last week, Iria Ashton, a junior prison officer, took the stand in the case in which Senior Prosecutor Adolphus Delplesche is representing the Crown and Grant Connell appears for the defence.

Ashton told the court he and Cupid are at the same rank at the prison, but Cupid seniors him in years of service.

The witness said that on Oct. 1, 2019, he and then superintendent of prisons Brenton Charles were at a meeting at the Ministry of Finance, when they learnt of Primus’ escape.

He said they immediately returned to the prison and Charles asked him to review the surveillance footage to see if he could determine what time and from where Primus had escaped.

At the time of the escape, the first of two by the accused murderer in as many years, no one monitored the surveillance system in real time.

Ashton told the court that when he found the portion of the footage on which the escape was captured, he made a copy to a flash drive then to a DVD.

He said he gave the DVD to Charles, and, at his request, he also gave a copy to the police.

‘Primus was doing a tour of the prisons?’

During cross examination, Ashton told the court that he was not in charge of the computers or the footage at the prison

Ashton said he was not but that he had acted as the request of the then prison chief.

“So, at the prison, anything goes. A junior prison officer could access the footage and videos and so?”

Ashton said that was not the case, reiterating that the prison chief had instructed him to access the digital video recorder (DVR) on which the footage was stored.

It was not true to say that junior officers could access the footage, the junior prison officer said.

Ashton said that in reviewing the footage, he looked at the Dormitory, the back of cell block B, the general office, the workshop and visiting area.

“What time were you looking for?” the lawyer asked.

The prison officer said he was not looking for a specific time but was looking to see when Primus had escaped.

“So at the point you were looking, no one knew what time Veron Primus escaped, or walked out of prison?” Connell asked.

Ashton said not at that moment, but later stated that “the system” showed some activity between 4:30 p.m. and 6 p.m.

Responding to a question regarding the date on which the activity took place, according to the footage, Ashton said he could not recall, adding, however, that the date and time on the footage were inaccurate.

The lawyer, however, said that what was not inaccurate was when Primus was seen opening his cell door, and proceeding to the dormitory gate.

The prison officer said he saw this on the footage.

“And after a casual walk outside, he then returned to his cell and shut the door.”

Ashton, citing the footage, confirmed this to be true.

“Then he came out again and closed his cell door again. He left the dormitory, went down the steps and round the cell block B. And not an officer on site,” Connell said, to which Ashton responded that he did not recall seeing any prison officer on the footage.

The cameras then picked up Primus behind Block B and he then emerged in the view of the camera looking from the Dormitory onto the Vestibule, the lawyer said.

“Veron Primus was doing a tour of the prisons? Won’t you say that? Do you agree? He was walking the length and breadth of the prison,” Connell suggested.

The prison officer said he could not say so.

The lawyer said that Primus then moved from the Vestibule to where prisoners make straw craft.

After Primus is seen near the straw craft area, Officer Richards, the senior officer working on the shift emerged from the gate.

Ashton confirmed that Richards was in charge of the shift but said he could not say how close Richards and Primus were when Primus went into the straw craft area.

The prison officer said that the footage shows a team that included Cupid patrolling the area of the straw craft.

The footage then shows Primus walking up the steps to the female prison, going past the officers’ quarters before proceeding onto the wall of the casualty, onto the roof of the workshop, then heading to the outer gate to the visiting booth.

“So you would agree with me now that Primus’ patrol basically covered the entire prison?” Connell said, but Ashton disagreed.

The lawyer said that Primus was seen in the yard of the outer gate and asked the witness to say exactly where that is.

Ashton said it is the area between the Workshop and the Vestibule.

Ashton said he and Hilson Ollivierre are the only two prison officers who have access to the footage.

He said that Ollivierre is his co-worker and his rank — junior prison officer.

The lawyer noted to the officer that he had previously said that junior officers did not have access to the DVR.

The lawyer asked the witness if he wished to correct that and Ashton said yes, adding that junior prison officers, in the persons of Ollivierre and himself, had access to the DVR.

The witness also said it is true that every time there is a power outage it affects the video system, “but to what extent, I cannot say”.

“So, as of today, you really can’t say when exactly Primus left the prison? … You can’t say with any precision, given all the meticulous procedures you all have round there, you can’t say what time Prims left?”

Ashton replied: “Yes, we can,”

“Or if he left on that day?” Connell continued.

Ashton said that the camera shows what time Primus left.

He said that he had shown detective Corporal Browne of the Criminal Investigation Department the footage and has received permission from the prison chief to give him a copy of it.

Ollivierre said that when Browne was reviewing the footage, he noticed that the date was wrong.

He said that a couple of weeks before the escape he had been assigned to drive for the prison and later realised that the DVR was not working.

Ollivierre said he had fixed the device hurriedly and did not replace a battery nor set the time.

Ollivierre said he was able to match the time of the escape to the actual time by using footage from the previous day and matching it to the time when certain events occurred at the prison.

One reply on “Primus’ first jailbreak was like a prison ‘tour’”