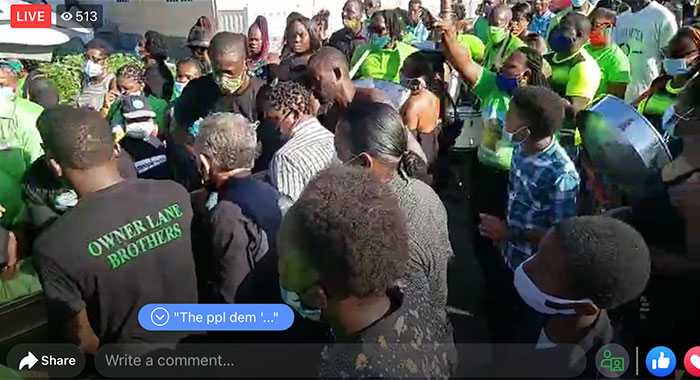 A scene from the funeral in Barrouallie. (Source: Facebook Live)

Prime Minister Ralph Gonsalves says that it appears that “there was a failure of local leadership” of the police in Barrouallie, on Saturday, where hundreds of persons attended a funeral, despite the COVID-19 protocols.

However, a live video stream of the funeral ceremony and the procession showed a large number of persons inside the church building, and an even larger crowd dancing to live music in the procession.

Several of the persons in the procession were not wearing facemasks, although it appeared that the majority wore masks notwithstanding that some mourners wore their facemasks incorrectly.

Netizens used the live feed to express surprise at the development.

The funeral took place a day after the first of two extraordinary holidays, which Gonsalves said was granted to help citizens to recoup from the stresses of the COVID-19 pandemic and the on-going effusive eruption of La Soufriere volcano.

The holidays also came at a time when the nation was experiencing a spike in local COVID-19, which has seen health officials detecting, as of Monday, 622 cases among nationals with no recent travel history, since Dec. 28.

Gonsalves commented on the funeral on Star FM on Monday, saying he had spoken to the Commissioner of Police, Colin John, about the development.

“I know the Anglican Church in Barrouallie. It is not a big church. And I think, without knowing all the facts, it would appear as though, on the ground, there was a failure of local leadership. I may be wrong on this and if I am wrong, I apologize,” said Gonsalves, who, as Minister of National Security, has ministerial responsibilities for the police force.

“I asked the commissioner, he said that the corporal had spoken with the priest — and I am speaking here second hand and there could be — I’m just, as old people say, I’m selling it just like I got it, without a profit.

“He said that the corporal spoke with the priest about the numbers in the church. I don’t know if it was before the church service or during it, and the commissioner said that the parishioners were asked, the funeral goers were asked if they can move out — some nuh — to have less persons inside,” Gonsalves said.

“Maybe there should’ve been a firmer grasp on that from the very beginning,” the prime minister further said, adding that he pointed out to the commissioner “that there, evidently, was a failure of police leadership on the ground in relation to the procession.

“I know it’s a popular young man who died and when a young person dies, the community is grieving and in the past year, we tended to do it, particularly after we had gotten over the hump, but some of that continued into this new period.

“But we have to realise we are in a new period, a more worrying period, including, possibly a different strain of the virus,” he said, but noted that it has not been confirmed that the new strain of the virus is present in the country.”

Last year, during the early stages of the pandemic, Gonsalves had derided persons who advocated against mass gatherings.

In one of his now infamous statements, he asked if persons should send an email rather than attend the funeral of a popular person who dies.

And, in his comments on Monday, he noted that the popularity of the deceased might have contributed to the number of persons who attended the funeral.

Gonsalves said that the funeral had been “the bad spot” over a weekend that the government had urged persons to stay at home.

The police, citing various pre-existing laws, had said on Thursday that they would have been enforcing the COVID-19 protocols.

In their bulletin, the police said they would conduct “strategic and targeted patrols” to ensure that citizens did not engage in certain activates and that certain things do not take place.

Among other things, the bulletin mentioned no playing of amplified music in public or private places; no mass gatherings of persons on beaches or other social events including river cooks, picnics, etc.; social and physical distancing are being practiced; motorists and commuters are adhering to the protocols with regard to public transportation and; the number of passengers riding in omnibuses; an ensuring that quarantined persons remain at their designated places of confinement at all times.

Gonsalves said he was sure that the Anglican Church would be reviewing what happened on Saturday.

The prime minister said he had raised the matter with chair of the Christian Council, the Reverend Adolph Davis, a Methodist minister.

The prime minister said that the cleric made “an interesting observation”.

“He said that for some time he had been concerned about what he calls, not so much ill-discipline at funerals, particularly at the procession, but a lack of a sufficient solemnity.

The prime minister said that celebrating a person’s life when they die is a part of Christian theology, adding that death is the beginning of a new life.

“But that has to be balanced with a certain solemnity. I’m sure that most people would agree with that. What I want to suggest, having said all of that, is that at the funerals, we have to more strictly observe the protocols and not only in the churches but we have to take care of wha’happening on the road too.

He noted that among the laws that the police had cited was the Public Order Act.

“And the Public Order Act could be used to say, ‘Look, you can’t do this. This is prohibited; this is not permissible, particularly at this time because the police have that particular authority in relation to public order and under the Public Health Act,” said Gonsalves, who is also a lawyer.

“So I think the police should have acted, not in a way to lock up anybody; to simply say, ‘No. No. No. No. This is not what should be done at this time.’

“The last thing I want to see is a policeman go inside a church, as happened in some countries, and pull people out and lock them up because the protocol is breached and to lock up people on the road. And I am sure if it had been drawn to people’s attention that you would have had far fewer persons. I think that is a lesson from that.”

The prime minister said it may well be that there was not enough police resources on the ground in Barrouallie.

“I don’t know but I told the commissioner that he needs to look to see whether in fact there was a failure of police leadership on the ground… This is not where I am attacking whomever the police officer who was in charge on the ground you know. You understand the point I am making? I am not laying blame,” the prime minister said.