iWN headline is ‘the opposite of what I was saying’ — PM 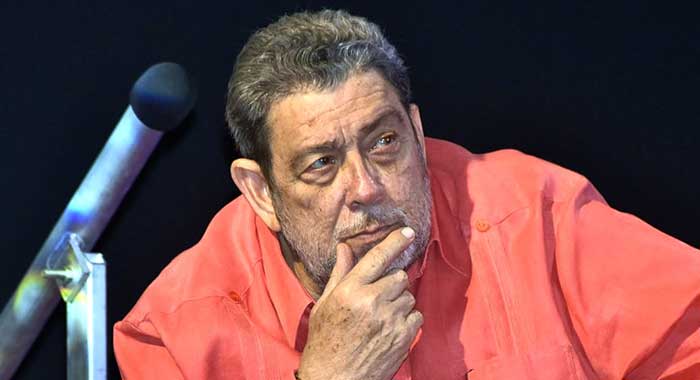 The iWitness News headline “SVG should’ve banned int’l flights in response to COVID – PM” was “the opposite” of what Ralph Gonsalves said on NBC Radio last Wednesday, the prime minister said on Monday.

“Now, I want to say the issue which you raised with iWitness News, the producer of that story came to a headline which is the opposite of what I was saying. Not just that it was mistaken, it was the opposite,” Gonsalves said on Star FM.

In the article, iWitness News reported that Gonsalves had said that his government should have banned international flights during the Christmas season and should not have allowed the Nine Mornings festival, in an effort to prevent an escalation of the COVID-19 cases.

iWitness News correctly quoted the prime minister as saying, “Of course, hindsight is always 2020 vision. Over the holidays, you should have banned the airlines, you should have [not] allowed any Nine Mornings to take place.”

The prime minister had earlier listed four reasons that health authorities had given for a spike that had seen hundreds of persons in St. Vincent and the Grenadines with no recent travel history test positive for the viral illness.

“In short, we have to analyse properly and see what is the best thing which we can do. We have been doing it quite well and then those four factors which I just mentioned in a composite way allowed it to get out of hand,” he said, before making the “Of course, hindsight is always 20/20 vision” statement.

The prime minister further noted that the country had just had general elections and during the campaign, thousands of people attended rallies without any spike in COVID-19 cases after.

“So the persons who would have been doing the Nine Mornings would have said you could have 15,000 persons at one rally but now you don’t want to have 400 or 500 at a Nine Morning event, or 200 or 100? And people came home with their families and we [saw] some of these gatherings,” the prime minister had reasoned.

However, on Monday, Gonsalves said he was saying that his critics, rather than he and his government were speaking in hindsight.

This was the prime minister’s position, although persons had called, in real time, for the flight to be banned amidst a deteriorating situation in the United States.

Among the persons who made such a call was C. ben-David, who in a Nov. 24, 2020 commentary on iWitness News, accused SVG of playing russian roulette by allowing the North American flights.

“My question is whether we are playing a Vincentian version of this deadly game at Argyle International Airport (AIA) several times a week by encouraging planes packed with our very own people coming home from one of America’s leading COVID-19 hotspots in both infections and death rates, Brooklyn, New York, and from the Canadian city of Toronto, Ontario, which scores very high on both indices. In fact, Brooklyn and Toronto have just increased their lockdown regulations with the former again closing all its schools as the virus enters its most hazardous second wave,” the commentator wrote a month before the spike in local cases emerged.

However, on Monday, Gonsalves said that when he spoke of hindsight being 20/20 vision, “I was making the point from the whole dialogue, the whole discussion, the whole conversation that there are persons who were saying what I should have done or not have done and I saying that hindsight is always 2020 vision; that means perfect vision. That talking to me nuh, you should not have allowed the aircraft to come in, the airline, or you should not have allowed Nine Mornings.”

The prime minister said that in his comments last week he had gone on “to debunk that hindsight 2020 vision.

“Notice what, I didn’t use a personal pronoun that ‘I’ or ‘we’; I said ‘you’. I understand the English language you know. And I thought that any child of reasonable intelligence, who was listening to what I was saying, I was making the case against not stopping the airlines coming over for Christmas and not stopping the gathering for Nine Mornings.

“I know the Health Services Subcommittee; they sought with the Nine Mornings Committee to not have big national events but to have community-oriented ones where the numbers would be smaller.

“Now, the point is, if you had banned the holding of Nine Mornings, persons would say to you this is now December the 16th, one month ago, you had crowds of 15,000 and 14 days after that, there was no COVID upsurge, there was no difference at all, why are you now banning some enjoyment? Only politicians could have their rallies?

“So what was presented in iWitness News in the headline was the opposite of what I was saying. And when you read the story, even though there was not any precursor discussion, there was not anything prior to provide additional context, even the story itself would tell you that the headline is misleading. But I say that is of lesser importance because that is not the first time that iWitness News would have misled people about what I say and it will not be the last time. So I don’t lose any sleep over that,” Gonsalves said.