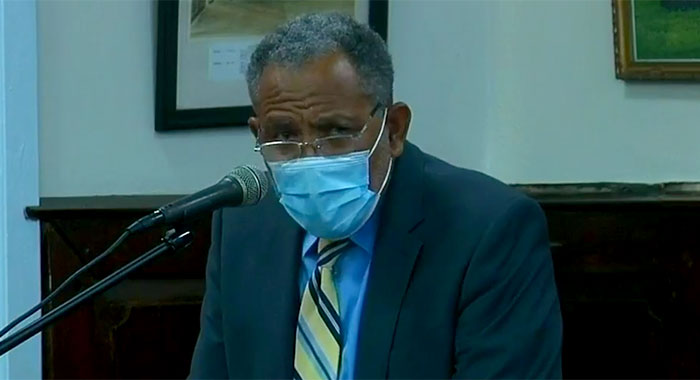 Leader of the Opposition Godwin Friday says that he does not want to see the coronavirus situation in St. Vincent and the Grenadines worsen and has called for an end to at-home isolation for the nation’s COVID-19 patients.

On Tuesday, in his contribution to the budget debate, Friday also called for a 28-day ban on flights to the country.

“I don’t want to see it get any worse. I made two suggestions, which I think are eminently reasonable and sensible. We cannot deal with what’s happening internally, if you continue to compound the problem with people coming in and using up resources that we don’t have, for quarantining, and for testing, when you have spread in the community, if not community spread. Others have taken it very seriously. Why are we being so cavalier about it? Two deaths are not sufficient?” he said.

As of Tuesday, SVG has recorded 1,059 cases of COVID-19, including 910 cases detected since Dec. 28, among residents with no recent travel history.

Two persons have died and 275 have recovered from the viral illness, leaving 782 active cases in the country.

Friday’s second recommendation was that the nation end “this ridiculous and risky policy of isolation at home”.

He noted that all visitors to the country must isolate themselves at a government approved facility, even if they test negative for COVID-19.

“But if somebody comes from Pembroke or from Mespo or from anywhere in the country goes to a clinic, tests positive, they tell you to go home and ride it out,” the opposition leader said.

“That doesn’t make sense. That is playing Russian roulette, because that will only lead to further spread because of the risk of contaminating family and other community members are obviously greater. That needs to end. And especially since there is no follow up to see how the person gets home.”

Friday said he had heard stories that he did not even want to repeat in the national assembly.

“That must be contributing to the current spread, and it must be of some worry to the chief medical officer. And those are the policies that she’s enforcing.

He said that facilities need to be provided so that persons can isolate safely, and not risk infecting their family members and friends.

“And if we can’t get the facilities at hotels, and guest houses and so on, then temporarily, we have to make facilities, using public buildings.

“I suggest a school. They want to do something else, that’s fine. Just make sure that we have the facilities so that people can isolate safely. I think that’s what most people want to do. Let’s treat this thing as if it’s the killer that the minister said in his own remarks, a disrupter of lives, a destroyer of lives and livelihoods. And as usual, I’m always on board and willing and able to do my part and that on behalf of the members of this side of the house,” Friday said.

30 replies on “Friday calls for ban of at-home COVID isolation, suspension of flights”