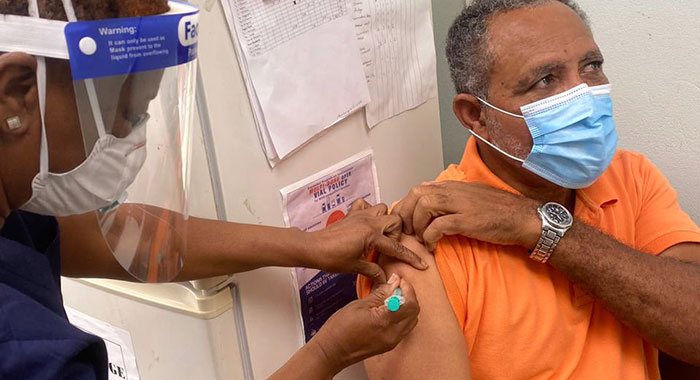 Leader of the Opposition Godwin Friday, on Monday, said that while he, his wife and their son, have taken their COVID-19 vaccine, getting the jab is a personal decision each person must take after getting the necessary information.

“… it’s a personal decision for everyone. I encourage people to do their own research and to read and when they feel comfortable to do so, ask the questions, necessary questions,” Friday said on his weekly appearance on his New Democratic Party’s weekday radio show.

“We asked questions when we were there yesterday of the health officials but that is something that we all have to make a decision on,” he further said on “New Times” on NICE Radio.

On Sunday, Friday, his wife, Ave, and their son, Nicholas, received the first dose of the AstraZeneca vaccine at the Port Elizabeth Clinic, in Bequia, in what he admitted was partly a public relations exercise.

Months ago, the opposition leader had told a press conference that he was willing to be vaccinated against the novel coronavirus at his office in Kingstown, in the presence of the media.

On Monday, he said that Chief Medical Officer, Dr. Simone Keizer-Beache called him about two week ago offering him the opportunity to be vaccinated.

He said that he expected that the CMO’s offer was “partly to do with public relations to try to encourage people to see that senior public officials were taking the vaccine as well because they want to encourage others to do so”.

The opposition leader said that he had indicated to Keizer-Beache that he would take the jab once the AstraZeneca vaccine was available.

Friday and his family were among “30 registered volunteers” to receive the jab in Bequia, one of five places across the country, including in Union Island, where vaccines were given on Sunday, according to the Ministry of Health’s Facebook page.

The opposition leader said that initially he had indicated that he and his wife would take the vaccine but their son later said that he also wanted to get the jab.

“He was in the younger age group so I didn’t push for him to do it. But I said, ‘Come along. If you come to the clinic and they are able to give you the vaccine then so be it.’ And he came along and they were quite willing to do it,” Friday said.

The opposition leader said that he thought his son receiving the vaccine “may serve some purpose in terms of public relations as well, because they see here is a young person who is doing it”.

He said that he finds that many young people are sceptical about taking the vaccine.

“You can’t dismiss their scepticism about the vaccine and all that they are hearing and reading on social media,” Friday said.

“…I know I heard some on the radio programme this morning, they were saying why would he do it because he (son) is not in the most vulnerable group. But part of the challenge we have now is persuading people who are in those groups that may be not just the vulnerable groups but in frontline groups, to take the vaccine so that we can get back to a level of normalcy…

“And for myself, I had sufficient confidence in it, that my entire family who is available here was taking the vaccine,” Friday said.

“And that is what the public aspect of it. But, of course, it is a decision for each of us to take and I did it because I believe that it would offer protection from the virus to myself and to my family members and that also, in my interaction with other people, hopefully, it would encourage them to do similarly.”

Friday said that he had not had any untoward reaction to the vaccine, though he wondered whether his tiredness on Sunday was because of his full day or the jab.

“So far, I feel fine. I took the vaccine yesterday; there is a little soreness in the point where the needle went in. You’d expect that but other than that, I am fine, I am here and no serious repercussions.

“I felt a little tired yesterday. I don’t know if that is because of it or not, but I had a full day yesterday: attended a funeral of a friend of mine in the afternoon, then I had a meeting with a friend of mine later on; had church earlier which was virtual, but still, it was church, at home. And so it was a day as normal. So this is the message that was sent out.”

He said that the people from the Ministry of Health were at the clinic when he was vaccinated and took interviews from him and members of his family and other people who received the jab.

Friday said he has been educating himself about the vaccine and had conversation with doctors who have indicated that to get back to a level of normalcy there has to be certain “herd immunity”.

He said that the fastest and safest way to do that now is through the vaccination.

The opposition leader said that while some persons propose allowing the virus to run its natural course in the community, the problem with that, as evidenced in the United States, is that many people will die, unnecessarily.

“And this is why we are not going to get back to any level of normalcy until we have herd immunity and the quickest way to get that seems to me, from the information and advice and the medical advice that’s around, is through getting the vaccination. “So that’s another reason why I decided to be part of it,” Friday said.