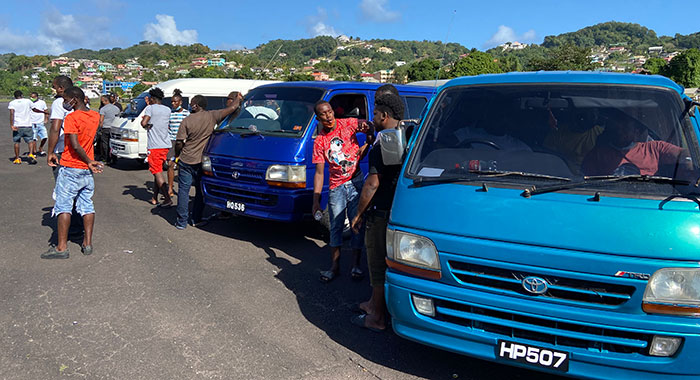 Some of the vans at the decommissioned E.T. Joshua Airport, in Arnos Vale, after withdrawing their service on Monday. (iWN photo)

Leader of the opposition Godwin Friday is not surprised that some omnibus operators in St. Vincent and the Grenadines have withdrawn their services over the COVID-19 regulations.

“This is predictable. It is something that you could predict happening because the government, basically, took the step to reduce the number of passengers that the omnibuses can carry to 50% of their capacity,” Friday said on New Times on NICE Radio on Monday.

On Monday, a significant number of omnibuses withdrew their services, complaining that it is not profitable under the new rule, which is expected to last for one month.

Friday noted that the government made the decision for health reasons, amidst community spread of COVID-19 in the country.

“But we have always said that even while this is necessary as a public health matter that you can’t just simply say to the van drivers, ‘Now you must bear the cost by yourself’,” the opposition leader said.

He said he had raised the matter in the budget debate earlier this month, saying the government had a long recitation about what it did last year but nothing about their plans for this year.

The opposition leader said he expects the government will review its position as the omnibus drivers have taken to peaceful articulation of their problem and the difficulty they are in.

Friday said that the government could do a host of things, including making parts duty-free for a time so that omnibuses can overcome the hardship or give a subsidy to the van operators so that they can at least maintain their operations.

The opposition leader said that the omnibus operators’ demand for a subsidy is reasonable.

“Nobody is trying to make a killing. I hear the van drivers, I heard their comments and pleas and so forth. They sound to me to be eminently reasonable,” the opposition leader said.

“Nobody is trying to exploit the situation. All they are saying is, ‘Listen, we have our requirements as well.’

“And so, it is not going to benefit anybody for the government to be hard-nosed about this. They have to come to the table and provide some assistance. The van drivers, in particular, right now are being asked to bear the brunt of the COVID-19 response with no assistance, it seems to me, from the government.”

On Monday, a number of omnibus operators told iWitness News that they are willing to withdraw their service until the government provides some assistance.

Friday said that he had raised the issue of assistance to van drivers during the Budget Debate earlier this month, on radio and in a press statement issued by his New Democratic Party  “calling for what is obvious”.

“If you are going to reduce the number of passengers to 50% of capacity, I have spoken to van drivers and they say that you can’t run profitably on that,” he said, adding that one driver said he rushes to make extra trips in the morning and evening to try to make up for the lost revenue.

“But, if you are losing on one trip, you will lose on three trips. It just means that you are compounding your loss and you will realise that you have no money in your hand at the end of the day but when you have to buy tyres and replace shocks and oil and gas and so on that you have nothing left,” Friday said.

The opposition leader said that omnibuses provide an essential service.

He further blamed the government for the current COVID-19 situation in the country, in which six persons have died.

Of those who contracted the virus, 612 have since recovered and 839 cases remain active.

“We didn’t bring COVID here but we had the ability to control its effect here in St. Vincent and the Grenadines better than we have done and the government has, basically, dropped the ball on this and the thing has, basically, gotten widely spread out in our community and now we have community spread and they are fighting all kind of definitions and labels rather than dealing with the problem,” Friday said.

He said the government must ensure that essential services are provided and assist persons who are in dire need.

“The public is served by the omnibuses. The omnibuses operators say they can’t operate with carrying just 50% of the passengers.

“… it is not just that you are not earning. It is that every time you operate, if you are losing, then it makes sense for them to simply park up the van and say, ‘I can’t do it anymore. I have been doing it for a week and hoping that the government would have chipped in and helped out. But if they are not doing it, I can’t do it anymore.’

“So it is necessary that the government provide some assurance,” Friday said.

Friday said that the president of the Vincentian Transportation Association (VINTAS) had sent a letter to the minister of transport, which was copied to him.

The letter outlines several options that VINTAS had brought to the government’s attention.

He said he does not know if the government has responded, as he was not copied on any response.

“But it seems to me that the requests there are very reasonable and certainly negotiable and the government ought to come in good faith to sort of say, ‘Let’s consider the difficulties you are having and see what we can do to assist while the restrictions are in place’

“… But you can’t simply say you have to do it at this level … but at the same time, notwithstanding all the difficulties that van operators have to begin with and taxi drivers and so forth because the fares are controlled and they have always complained that they run very, very thin margins to get parts and so forth and asking for relief.”