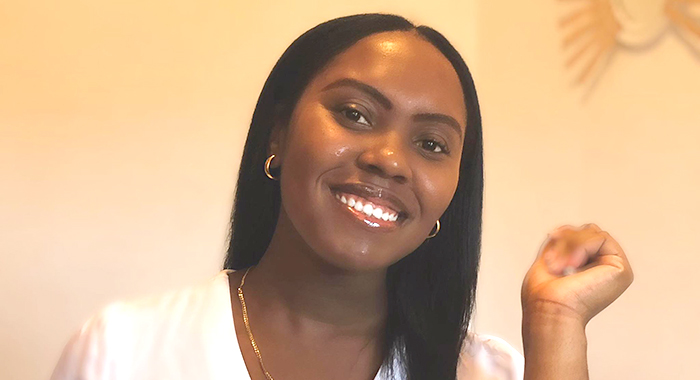 Oleen Horne took to Facebook, on Tuesday, “to clear the air”.

Police are said to be looking into an allegation by a Bequia woman that sex videos of her that began circulating on social media on Tuesday are actually evidence of her being raped.

Oleen Horne, a teacher, took to Facebook Live to plead with persons to stop circulating the video and to share her explanation of what had happened.

She said that she was raped and beaten by a man, who she had been dating, but broke off the relationship after she found out that they were close relatives.

She, however, said that the man had raped her anally.

In the video, the woman’s back is turned to the camera but the video was shared along with photos of Horne and a screen capture of her Facebook page.

Horne, however, said that the videos that began circulating on Tuesday, in which her face is clearly visible, are of her.

“And I want to clear the air as to what happened because people seem to think that that is something that I did willingly but it’s not,” Horne said.

“And I am here to show you guys the receipt because this is ridiculous and I am going to show you who the person is, so that other persons will not get involved with the person.”

During the 28-minute Facebook Live broadcast, Horne showed a picture and gave the name of the man who she said had raped and beaten her.

She said that after raping her, the man blackmailed her and used fear to force her to visit him in St. Vincent when he returned to St. Vincent from Canada last year.

“I have been trying to stay quiet about the situation because this person has been hushing me for the longest while by threatening me, by blackmailing me,” Horne said.

Horne said “one thing led to the next” while she was dating the man she would later find out is her relative.

She said that she broke off the relationship and “some other stuff happened” and then they were “cool and were talking” and showed “no signs of anger”.

One day, he offered to drop her to a dental appointment, but instead took her to a hotel on the east coast of St. Vincent.

“He took my phone … and he literally — he became a whole other person, literally… He beat my head to the ground, he kicked me, he slapped me, he boxed me, anything possible. He put a belt around my neck, he tried to poke to out my eyes — and he did this for hours, eh. He did this for hours…

“What this man did to me is unacceptable and I am tired of staying quiet. I have been staying quiet since last week. I am fed up and I am letting people know what happened…

“This man is insane, literally, he said he is going to rape me again and I have the screenshot from him telling me that he would rape me again. Okay, people?”

Horne said that she did not press charges in 2019 because she did not want to frustrate the man’s mother.[J6]

“That was my worse mistake, because I, Oleen Horne, I have a big heart, you know, I have a really big heart so I really don’t know when to not forgive. So I forgave him, I decided I was not going to press charges.”

She said that the man hacked into her phone.

“When he kidnapped me, he locked me in the room and he had my phone. I didn’t know what he was doing. This guy, he hacked into my stuff. He went back to Canada and eventually now, he’s like, oh, he has control over my phone.”

“I don’t know where he generates them from but he generates these numbers and he torments me. The whole of last year, I’ve been suffering with depression, anxiety, everything because I was being blackmailed. I had to do stuff for this man, all because he was saying this time in the past he took this image of me, that image of me.

“So I know what society does to people whose stuff gets leaked so I was so afraid, apart from him beating me up badly,” Horne said, adding that she has “my doctor paper still”.

“… -well actually, the police knows so he can’t deny that he ain’t beat me up because I had so many scars, went through so many depression and all these things. People don’t even know.”

She said that she went to meet him when the man told her last November to come to St. Vincent “or this or that would happen”.

“I was so frustrated and fearful of so many things. I was afraid of him for one, he as blackmailing me, and on top of that, when stuff gets released of people, it’s over for them…

“I’m not going to tell you guys all of the details, for certain reasons but what I am telling you guys today is the truth,” the woman said.

She said that the man beat her up last November, this time, in her head.

“I grew up a good child; I was a bookworm, these things, all these things. I never got in fights. I was girly, very girly, I don’t know how to fight so he had so many controls over me, mentally, physically, everything.”

She said that the man took her to another accommodation venue on the east coast of St. Vincent and abused her.

“And I know usually people will say what they would do in certain situations.

“But until you are in that situation, it’s like I was paralysed. I couldn’t think, I couldn’t move, I couldn’t defend myself in any way possible.”

Horne said that photos of her that were released last week were taken “when that man had a knife to my throat. It was either I do or die. So I chose to do because I didn’t want to die.

She said there are other young ladies out there who the man has done things to.

“If you still want to think I did those things willingly, by all means, continue. But I know what happened so I will walk the street like — I know what happened. This man literally took advantage of me and he has no — to tell someone you will rape them again. Okay?”

She said that the man had “released many more things about many more people”.

She said that a lot of people are messaging her because the man gave them her number. She said she did not cry on the live video because she has been crying “so much and my tear bag dry. And I really can’t. Please.

“And nobody send me any video that you are seeing out there. It is just ridiculous. Don’t send anything to me because I know what is going on.

34 replies on “Woman says sex videos show her being raped”