Volcano back into ‘uncertain period’ — expert 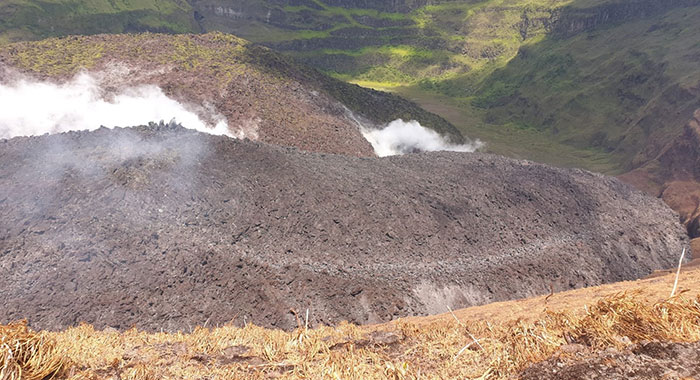 The lead scientist monitoring La Soufriere as it enters the fourth month of effusive eruption says that the cessation of the heightened activity last week moves the nation “back into that sort of uncertain period” where it is not clear what the volcano will do next.

Speaking on VC3’s Round Table Talk on Wednesday, geologist Professor Richard Robertson noted that the   elevated period of activity with the volcano-tectonic (VT) earthquakes had lasted from last week Tuesday to Friday, March 23 to 26.

VT earthquakes are normally associated with underground fractures of the rock mass and are commonly generated by magma pushing through an unyielding rock mass.

“That period of activity has since died away and we have returned essentially, in term of seismic activity, to the activity that we had before that, which are earthquakes which we think are associated with the emplacement, the growth of the dome itself,” Robertson said.

Since December, a new dome has been growing in the crater of the volcano, next to the one left after the 1979 eruption, the last time the volcano erupted explosively.

“The growth of the dome itself involved gases pushing through, rocks moving, and that causes vibrations that we detect, a particular type of earthquake that are usually low in energy and it’s recorded by the station…”

Robertson said that the volcano has since returned to this type of activity.

“So the dome has continued to grow from all indication, from satellite imagery and other things that we have seen, and that is causing the earth to shake in the vicinity of the dome and we are picking up those earthquakes at the [monitoring] station,” he said.

Asked if the lessening of the seismic activity was a good or bad thing, Robertson said:

“That’s an interesting one. It could be a good thing in the sense that we are back to familiar terrain in a sense.”

He said that the current activity at the volcano is clearly associated with the growth of the dome.

“So, that’s good. We are back in familiar territory. I guess the downside is that it means that we are continuing with the dome growth period, which, from all indications, there is no clear end in sight. And there is no indication that it is either coming to an end or speeding up.

“So, it’s good in that sense but it is bad in that we are back in that uncertain period and it means that we may be in for a sort of that long period where it is doing this and nothing else and it could go back into that heightened period again.

“So, it kind of suggests that we might be going on or a bit longer than we may like to but it is good in the sense that it is back to familiar activity.”

He said that the volcano was behaving similarly and differently from how it has behaved in previous eruptions.

“It’s similar in the sense that in the past Soufriere has grown a dome. The domes that we certainly have seen in historical time, the ’71 dome and the ‘79 dome, they grew much faster. So, they became big and then they stopped,” Robertson said.

La Soufriere erupted effusively in 1971, eight years before the explosive eruption in 1979.

The geologist said that the current dome is growing much more slowly.

“Maybe it means that it might go on growing for longer or it might mean that from all indications the rock is quite stiff and is having a hard time coming out. That may or may not be bad. But it’s similar in terms of what we have had before.

“Soufriere has had dome growth before. It is similar in other respects in terms of the speed it is coming out with, but otherwise, it is similar to other activity we have had.”

He said that each eruption of any volcano has similarities to previous eruptions as well as “its own particular ways of manifesting itself”.

“Even though it is in the overall realm of what Soufriere does, it has its own unique characteristics too,” Robertson said.

One reply on “Volcano back into ‘uncertain period’ — expert”