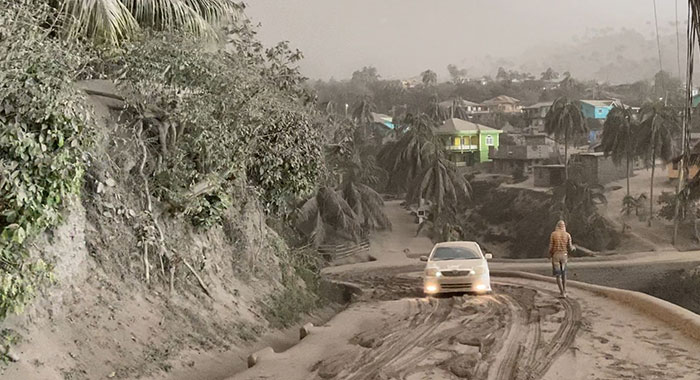 Magum, a community in the red zone, in north eastern St. Vincent, is blanketed in ash on Saturday. (iWN photo)

The on-going eruption of La Soufriere is more like the 1902 eruption, which claimed 1,600 lives at a time when early warning systems and evacuation capabilities were not as advanced.

Speaking on NBC Radio, on Sunday, geologist professor Richard Robertson said that while most people know of the 1979 eruption, what is currently happening at La Soufriere is more akin to more a century ago.

“The activity pattern we have currently is more similar to a 1902 type of eruption of that kind of scale, rather than a 1979 scale. The people who lived though 1979 know the kind of eruption we have had.

“What does that mean? It means, unfortunately, that it is likely going to cause more damage and destruction to St. Vincent but it also means that there will always be a safe place in the south of the country, which might have a lot of ash every now and then, but you can still sustain life and limb and it would not — which is what we all worry about — get so big that it destroys the whole country. That’s currently doesn’t seem to be the case.

Robertson’s comment came as he warned that pyroclastic flows could become major issue.

Pyroclastic flows resulted in many of the death recorded in 1902. No one died as a result of the 1979 volcanic eruption.

He said that the monitoring team now has evidence that there have been pyroclastic flows.

When a pyroclastic flow occurs, a mass of superheated air and volcanic material, rather than rising into the atmosphere, collapses on itself, rushes down valleys, at up to 200 and destroys everything in its path.

“So if you visualise that, you have something is shooting down the mountain side, it is going faster than Bolt, … sometime 200 kilometres per hour… Fortunately, it stays in the valley but sometimes it spreads out to the surrounding, higher, paths.

“But when it meets anything in the valley, whether it is trees, cars, building, it has enough force that it pushes then out of the way, destroys then and it keeps going. It has so much force, so much energy and so much heat than when it gets to the coast line now, … it is so hot that it then boils the top of the sea … and it then creates a cushion of bullets that it then shoots across the sea even faster and it only runs out eventually.”

Robertson said the flows that the team had observed might have been from one of the previous explosion that has occurred since La Soufriere erupted explosively on Friday, and not necessarily the activities Saturday night.

“So far, it seems that we had not observed them from the observatory but there is evidence that they have occurred,” he said, speaking from the monitoring station in Belmont, near Rose Hall, which offers a commanding view of the volcano.

“There is one on a video that we have access to that happened on the leeward side,” he said, speaking of his team’s evidence that pyroclastic flows had occurred.

“That tells us that in addition to the venting that’s happening, these things can happen and are beginning to happen, which means that the volcano itself, the mountain, Soufriere, and any communities there, not only they had to survive the heavy ash but now they have the potential of being destroyed by these flows that go down the mountainside,” Robertson said.

“They are going to do down the valleys, but these things are not like the ash that damage things by the weight, these flows really are moving masses of destruction,” said Robertson, who warned that the roofs of even more buildings could collapse under the weight of volcanic ash.

“They destroy everything in their path,” Robertson said of the pyroclastic flows.

“If you have the strongest house in the world, they will just bulldoze it off the ground. So, it means that the amount of devastation you are going to have on the volcano itself when this thing has stopped and we go back and see, is going to be significant not only because of the ash but because of these flows that could go down the mountain side.”

The whole of St. Vincent, some of the Grenadine islands, as well as neighbouring countries are blanketed in ash.

Robertson, however, warned that the volcano is not showing signs of letting up.

“The activity that we are having now, there is no indication on the instrumentation that it is waning, that it is going towards the end.

“So, I would love to tell you that this is all we have to sustain, this last couple days, but I can’t tell you that. It is likely that at some time it would quiet down and there will be a break so that we can recover a little bit more, but don’t be surprised if after the break it picks up again and then we have another period like this and then there might be another break and it picks up again,” he said.