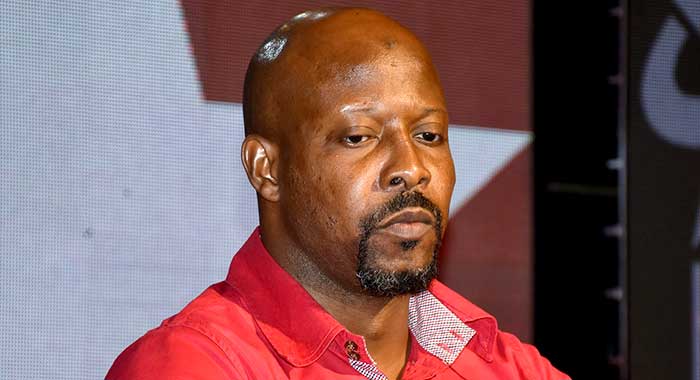 On April 8, in the midst of an evacuation order for Red Zone communities, including those in North Leeward, the constituency that he represents in Parliament, Carlos James, in a Facebook Live broadcast, declared:

“I am asking persons to be prepared to be vaccinated as well. Because once you leave Chateaubelair, you go to an evacuation centre, you will also be vaccinated.”

James, who broadcast live his efforts to assist in the evacuation, by sea, of people from Chateaubelair to Barrouallie, sounded militant as he spoke into the selfie camera on his device.

“This is not a drill and it is not voluntary! There is a pandemic that is taking place and we will be vaccinating persons once they enter a government-operated shelter and I want that to be very clear to persons as well who are listening to this Live.”

He was speaking as residents of Chateaubelair and neighbouring communities, their voices anxious, boarded the Jaden Sun, one of the ferries that moved people between the two towns, hours after an evacuation order was given because of increased activity at La Soufriere.

There were similar evacuations, by land, taking place in the northern one-third of the country and even in some communities in the Orange Zone.

The volcano erupted explosively about 12 hours after James’ comment, at a time when the government was pushing back against deeply entrenched COVID-19 vaccine hesitancy.

Among the persons that James’ comment unnerved, was his constituent Isha Hamilton, of Fitz Hughes, who sought shelter at the Kingstown Preparatory School, after being evacuated to Barrouallie.

Speaking to iWitness News at the emergency shelter on the afternoon of April 9, hours after the eruption, Hamilton said that when she arrived the previous night, persons were concerned about whether they had to be vaccinated to enter.

“When we got here, we asked the questions because a lot of people were frightened because they thought that they had to take a vaccine to come in. but when we talked and asked the questions, we found out that we didn’t have to take any vaccines, then we came in,” said Hamilton, who evacuated along with her son, her extended family and their family dog.

In giving the evacuation order, Prime Minister Ralph Gonsalves had announced that cruise ships had offered to ferry persons to other countries, but were demanding vaccination for boarding.

The cruise ships later said that it was the government in Kingstown that had demanded vaccination of evacuees.

Kingstown also said that other Caribbean countries that had offered to host evacuees for a specified period of time were demanding vaccination before, or on arrival.

iWitness News asked Hamilton if she had anywhere else to stay and whether she would take the option of moving to another Caribbean country or staying on a cruise ship.

“No!” she said. “Because the prime minister said that you have to be vaccinated and I don’t trust the vaccine. So I am not going to,” she said.

“I just think it is out too quick and if somebody is making it mandatory for you to take something, there is something wrong about that,” she said.

Hamilton said she had believed that she had to be vaccinated to be allowed to stay in a shelter “because of the information that was on social media.

“Well, not directly from the prime minister but everybody else putting up that you have to take the vaccine in order to come to the shelter. And everybody else was concerned about it too.

“I was concerned but I saw yesterday that if you want to go on the cruise ship, it is mandatory, or go out of the island, it is mandatory for you to take it. I’d rather stay here,” she said, referring to the classroom that had become her temporary home.

Jacobs and four other members of his extended family sought refuge at the emergency shelter.

“I didn’t want to move from my village in Dickson, because I was looking at a different place. Because when they say if you go to the shelter you have to take the injection, I don’t want it. Because it sounds like a force, but anyway, I came because of my mother-in-law…” he told iWitness News.

He said that health workers had come to the shelter the day after they moved in and offered the vaccine.

“We said we don’t want any vaccine. They said it’s not mandatory,” Jacobs said.

During a media tour of volcano-ravaged North Leeward on April 18, Channel 4 News, out of the United Kingdom, asked James about the vaccination prerequisite for entering state-operated emergency shelters.

“Now, what is taking place at the moment is that there are persons who are in shelters with underlying issues, persons who may have some form of vulnerability who may be adversely affected by the COVID-19 virus.

“We are encouraging as much persons to be vaccinated, we would like even if you are a young person and you may be healthy, you have to take into account that there are persons who may be in shelters who are vulnerable, who have underlying issues and we have to also protect them.

“Now, what would happen, naturally, in terms of if you are moving to an evacuation exercise, moving persons to other countries, the other country, naturally, at their borders, are requesting that persons be inoculated before they arrive into the country.”

It was, however, noted to the MP that only about 12,000 doses of the vaccine have been administered in St. Vincent and that the vaccination comment caused a lot of confusion and panic amidst the evacuation.

“Well, it’s really what we have to focus on in protecting lives and it is important that we look at that,” James said.

“We are not forcing persons in shelters to vaccinate,” adding that evacuees who wanted to go to other countries, “the requirement form other countries are, ‘Look, we are willing to accept persons and we are hoping that they would be inoculated.’”

He, however, said that there were not many people taking up the offer of temporary stay in other Caribbean countries.