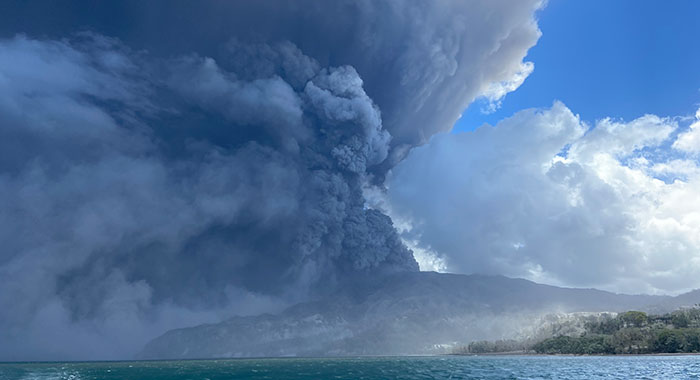 The eruption of La Soufriere, as seen from just off the north west coast of St. Vincent on April 22, 2021. (iWN photo)

La Soufriere has been “virtually silent” since its explosion last Thursday, amidst an explosive eruption that began on April 9.

Speaking during the same daily update, seismologist Roderick Stewart said that during all the explosions there were a variety of different volcanic earthquakes, namely volcano tectonic, long period and hybrid.

“Since the explosion on the 22nd, we have had very, very few. Just the occasional one and they have been very small. So an incredible change in the activity,” he said.

Stewart said it is difficult, as a seismologist, to compare the level now to before the explosion started.

He noted that between December, when the volcano began erupting effusively, and February, when a then small dome was growing inside the crater, the only seismic signal was from the one signal at the summit.

That station was destroyed in the eruption this month, so it is quite difficult to say if the volcano is quieter than it was before the explosive eruption or if it is at the same level.

“There may well be a dome growing and we can’t pick up the seismicity because we will only get it near the summit. But overall, it’s been remarkable the change in the level of activity after that last explosion. It’s gone back to virtually silent.”

Meanwhile, Robertson said that some of the key stations are not reporting any events, and reiterating that something could be happening at the volcano that is not being detected seismically.

“The plan is… Rod is going up on a plane today to have a peep in the crater to see if we can confirm what we think might be happening, which is [that] there might be a dome growing,” Robertson said.

“There is a suggestion from interpreting some samples that there might be a dome there and the way in which the seismicity that we don’t have suggests that that might be the case or simply that nothing is there and it is just simply quiet.”

He said the monitoring team might not be able to confirm this until tomorrow, Tuesday, adding that, hopefully, Stewart would be able to see inside the crater during his flight, and then the team would be better able to explain to the public what is happening.

Robertson said that his team is hoping, at some point in the future to reinstall the monitoring stations at the summit, once it is safe to do so.

Since April 9, there have been at least 32 distinct explosions at La Soufriere, Stewart said, adding that the figure could be 31 or 33, because at one point, the explosions were very close together.

Of these explosions, 20 were during the first two days of the eruption.

“Not as much as prior eruptions have. It is still nowhere near — not close to 79’, which was 50 to 60 million [cubic metres of new material] and ’71,” said Robertson who has warned that the current eruption can drag on for a year.

One reply on “Volcano ‘virtually silent’ since last explosion”